Ah, the new Bond. Some critic said that it has the best opening sequence... since when, compared to what, I don't recall (Mark Kermode mentioned it.) Well I sat there in the cinema, finally deciding to pay up and serve my curiosity, and, hey what's this? Arty black and white? Noir Bond? And - BAM!! Brutal fight in public toilets. And, BOP! A dry one-liner and the opening song kicks in. Well, the Chris Cornell and David Arnold song is underwhelming but nonetheless, the hair on the back of your neck ought to be bristling. And then - cobra fight! Very retro-Bond. And then - that free-running chase in which the muscles of your jaw are loosening. I don't believe an opening hooked and shook and excited me so much since "The Lord of the Rings: The Two Towers".

I had been urged to see "Casino Royale" because of an reawakened interest in the early Bonds I had last year mixed with good reviews for the new one. I had just recently watched "Dr. No" and "From Russia With Love" again (Christmas presents). I was surprised at how measured the pace of "Dr No" actually was, how economical it was with its absurd villain, how it was straight-faced about its ridiculousness. Slick and even faintly sinister. "From Russia With Love" even better, arguably due to two brilliantly iconic fight scenes: the claustrophobic train fight, which takes a couple of minutes but apparently three weeks to film, and which hurts; and the showdown with Rosa Klebb - a frenzied, insane old lady pinned by a chair like a wild animal; lethal spiked shoes. Unforgettable.

Famously, Bond descended into a campness and overblown hokum because, well, the public liked it. Whenever the series has famously tried to return to a more earnest and bruised agenda, it has famously been called a failure. Even "The Man With The Golden Gun" was deemed mostly a minor effort for its relative modesty. And apparently action fans, like horror fans, like one-liners and puns with their ultra-violence. I have never really understood that. At least with "Casino Royale", the few one-liners seem a part of the fabric; they don't capsize the drama ~ this too is like the early Bonds. And here, Bond's ego, misogyny and barely hidden brutality - all points of critical interest and fault-finding - are all points of character and plot. Like any typical mother, "M" simultaneously chastises and cultivates him as he tears around exotic locales in an attempt to undermine and reign in a man who funds terrorism and plays poker. Some think that the key card game doesn't make good drama, that it's boring and goes on and on. But it is the mundane, forced ritual of the table, the mind games played there and the skill required, that are meant to absolutely be 007's forte. Indeed, it is the conflict between his needing to maintain his sharp cool at the table whilst being interrupted between hands by various attempts on his life that surely create drama and tension? "That last hand nearly killed me," he says, and indeed we feel the quip is earned. There he is, playing poker with knuckles that have the skin torn off. Leaving aside the convenient fact that nobody seems to notice this, let alone question it, isn't it an apt symbol of what Bond is about?

And Daniel Craig's Bond is a scary proposition. You wouldn't want to get on his bad side. Aside from those steely, seemingly unblinking blue eyes, he has a physique and cold determination that makes you believe he can sprint for miles in pursuit of his quarry, or take some serious torture in his stride. And the gratuitous product placement even becomes absorbed into the ethos, for Bond is also all about that surface glitz, that cultural passport that knowing the right brand names allows you. OK, at this stage - and this is meant to be an origin story of sorts - he is a rough diamond. He needs a well-cultured girl to tell him what a real suit is, and when he first preens in front of the mirror wearing it, and that Bond bassline slithers beneath the moment, we can almost feel his vanity and awareness doubling up. Craig makes Bond vital again and I bet those that didn't believe he could do it are shaking at the prospect of a house visit. 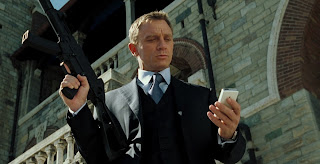 No no, really, everyone seems mighty happy to have Craig prove the sceptics wrong, and not least the sceptics themselves. How Bond became nothing less than a British institution is quite odd, and surely the series has run on goodwill and the reputation of better earlier efforts? Hmm but how "British" Bond actually is open for debate: he's positively European and American friendly now, if you check out "Casino Royale"s listed country/s of origin. ...But now, we have a film in which everyone seems to have wanted Bond to matter once again. I was convinced. Too long? Possibly, but I can't say I wanted it to end. I held my breath in the brilliant action sequences and wallowed in the slower patches. The romance? Well, they tried to make it a key to his personality, and it didn't insult the intelligence. Eva Green, Caterina Murino and Ivana Milicevic all looked incredible and had the chance to play with Bond girl conventions. Even the bad guy was underplayed... someone with a foreign accent and an eyelid that weeps blood. Mads Mikkelson quietly stands his ground against Craig without ever seeming to want to upstage him. Menace rather than madness.

It's an almighty reboot, and perhaps the best action film of 2006. I am already thrilled at the thought of seeing it again, and that is the sign I was thoroughly entertained. It is going to be really interesting to see what they do next. Finally, the excited interest in the next Bond will be warranted. Will they remake the earlier Fleming titles, but stick closer to the original plots? Will they hold on to their self-confidence and sidestep a lot of that Evil Genius Plots World Domination stuff? One can only hope. I am waiting expectantly. And trying to look both impeccably cool and brutish as I do so