It occurs to me that all the films I have watched in this period were horror films to some degree or other. “Night of the Sunflowers” isn’t strictly a horror film, but it has horror and thriller ingredients and, like “The Mist” is concerned with the fear of the mistakes that we make. Similarly, “Rear Window” isn’t strictly a horror, but it is a murder mystery with some barely concealed dwelling on dismemberment. “Disturbia” gives “Rear Window” to Twenty-First Century youths - and there is also a decidedly retro-Hitcockian feel to “Vacancy” which, like “Them”, reduces the couple-under-siege, psychological torture tour-de-forces of modern horror down to the bare bones in tight, brief packages. I also saw a good monster movie, and some terrible, terrible ones… 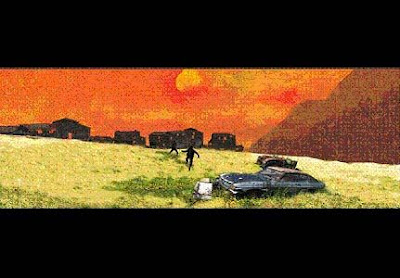 (Jorge Sanchez-Cabezudo, 2006)
- Spanish thriller more concerned with the environmental influences and errors of judgement than just the mechanics of the murder. In rural Spain, there are dead towns, dead-end lives and rapists at large. Ugly opportunities are taken for a variety of reasons: to escape small town life; to preserve the civilised life one has; to succumb to barely repressed sexual and murderous urges. There is black humour too: the only two residents of a deserted town are locked in a stubborn feudal conflict. Excellently performed and revealed through a non-linear, multi-perspective narrative, this makes for a slightly chilly and absorbing thriller.

Children of the Corn III: Urban Harvest
(James D.R. Hickox, 1995)
Inexplicably long-running series: this third offering starts with interesting enough good/bad siblings and country/city conflicts, but descends into a hilarious final monster attack in which toy humans get devoured… the kind of deliriously bad effect you probably wouldn’t have thought possible in the modern age. And the monster monent strangely winning for that. Otherwise, there are a couple of nasty deaths, some choppy narrative, increasing incoherence and a strong central performance by Daniel Cerny as Eli holding the nonsense together.

(Jaume Balagueró , 2002)Despite early promise and some good ghostly reveals, “Darkness” is a total incoherent mess that doesn’t know what on earth it is. Increasingly silly character behaviour and cripplingly bad dialogue add to the groans. The first clue is that all the carefully composed moments of spookiness give way to strobe-cutting flashback ‘scares’, a latterday horror film tic that acts more to diffuse unease and real scares. By the time we get to things crawling across ceilings, all coherence and interest has long since been lost. Bafflingly bad. 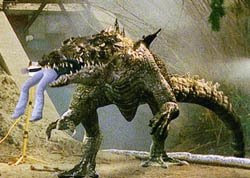 Dinocroc
(Kevin O'Neill, 2004)
- Unremarkable but fun enough monster flick from the Roger Corman. The Dinocroc is more Raptor-Rex wannabe; the Australian croc hunter is all Paul Hogan and probably offensively stereotypical; the bad guys are the heartless company scientists, and there are plenty of moments you recognise as being done better in other films… Notable only for its grandstanding set piece where the horror kid, usually savvy and resourceful, doesn’t make it past halfway through the film.


Them/Ils
(David Moreau & Xavier Palud, 2006)Stripped down shocker, wins for washed out ghost-house look and genuinely frightening mid-section, and for leaping into something a little more surprisingly socially charged by the end. Probably doesn’t wholly gel, but it proves the old premise of a couple under siege and terrorised from unknown tormenters can still work with a cool aesthetic, good scares, a little artiness and a dab of social commentary. Highly recommended. 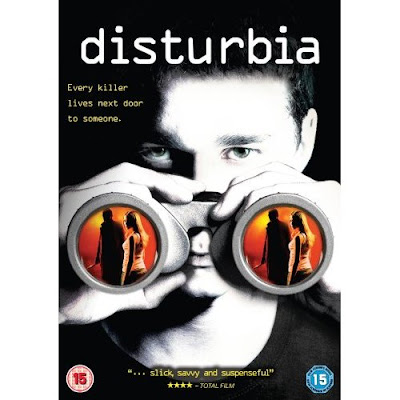 (D.J. Caruso, 2007)- “Rear Window” for sexy Twenty-First Century teens; or “My Summer Of Murders”. Reaches its peak early with its opening car-crash and despite Shia Labouf’s winningly natural performance, quickly exposes itself as having little new to offer. There’s no suspense concerning whether or not the neighbour is a serial killer (he is) or whether the hot girl next door will get it on with our main man (she does) or whether it will all ultimately play safe whilst indulging in an excessive and unnecessary faux-gothic ending (it does). Unlike Hitchcock, there is no interest here on the nature of voyeurism or people and privacy. Reminded me a lot of those 1980s Hollywood serial killer flicks: slightly edgy, enjoyable in passing, but ultimately toothless.

(Alfred Hitchcock, 1954)The real deal. Stuck at home overlooking his neighbours in the square, James Stewart does what comes naturally to a photographer, or anyone with an artistic bent, and becomes voyeuristic in both appreciation of his neighbours and for cheap spying thrills. He’s also avoiding committing to his gorgeous girlfriend… but luckily their love-life spices up when she too is convinced that the neighbour across the way has murdered his wife. Little perversities and kinks like this are quintessential Hitchcock and all the better for not being overstated. Likewise, there is plenty of grisliness going on, just not on camera. Plus, slowly, we too get involved with the little life stories of the neighbours, so it’s not just an exercise in cinematic and narrative high concept cleverness, though it’s that too. For all his reputed detachment and odd callousness, Hitchcock’s design shows real empathy for those populating the tiny films in the windows opposite.

Devil Times Five
(Sean MacGregor (& David Sheldon [uncredited]), 1974)
One of those rewarding little oddities for those that enjoy rough-edged low budget strangeness and exploitation with slightly offbeat trimmings. In the 1970s, a bunch of adults under the domineering finger of Papa Doc head out to a summer house for business and bonding; simultaneously, a bus carrying a bunch of homicidal kids crashes and lets loose the murderous gang. I am not sure what kind of institution for the mentally ill would allow their young charges to dress up in the cookie clothes of their own choosing, but there ya go. There’s some gratuitous breast-revealing bitch-fighting, a thoroughly contrived death-by-piranha, some padding here and there as murder scenes play out in slow….slow-motion, some solid b-movie acting… It is never quite as interesting as it ought to be: the precocious intelligent kid (Leif Garrett) is always undermined by the one that dresses like a soldier and spouts military speak evidently learnt from bad war movies. Leif is the most bizarre, even alongside the homicidal nun, as he goes tearing off a wig every now and then, cross-dressing in the film’s one surprise reveal, and cursing, purring vengefully, ambiguously, “That’s it! You’re all mine, Harvey Beckerman.” Filmed by two different directors when the first didn’t produce enough usable material, then in true z-movie fashion it went through a number of monikers, “Devils Time Five” is probably less than the sum of its oddness, but it has plenty of interest and strangeness to interest.


Vacancy
(Nimród Antal, 2007)
Another stripped-down terrorised couple flick, more Hitchcock-that-never-was. More modest and less memorable than “Them/Ils”, but this too has a frightening midsection and wins with excellent production design and retro-packaging. The excellent Saul Bass-like credit sequences give way to motel décor that evoke a set left over from a film that hasn’t yet heard that Hitchcock has been dead a while, and yet, strangely, has heard of snuff films and ‘70s exploitation. Excellent performances from the leads and credible characterisations help immensely. Nothing new, but solid, fairly scary and enjoyable. 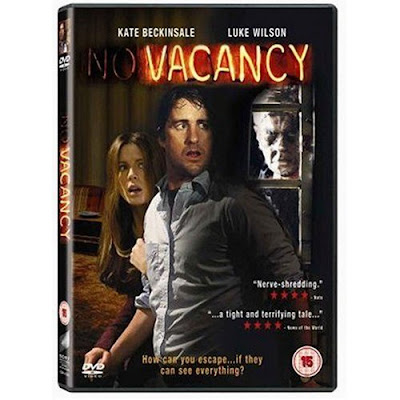 Hellboy: Blood & Iron
(Victor Cook & Tad Stones, 2007, TV film)
Another animated film from Hellboy, after the Oriental horrors of “Storm of Swords”. This is a slightly lesser tale, but nevertheless stays true to the Hellboy formula: losts of monsters and ghosts, a story that escalates into near-incoherence, all knocked into conclusion with a fist-fight showdown. And Hellboy says “Oh crap” at some point. Engrossing with fine voice work and chock full of weirdoes, creepiness and monster excess.


Wilderness
(Michael J Bassett, 2006)- A bunch of youth offenders are sent to an island for a “rehabilitative” exercise after they are all held responsible for driving one of their own to suicide. The packaging for “Wilderness” has a pair of monstrous jaws coming for you, but don’t be fooled: there are no monsters here, and the horror of killer dogs is secondary to the “Deliverance”-style revenge flick. The barking monstrosities are, ya know, “us”. The characters are so repulsive and weak, and their dialogue the same, that there is nothing to care about and no reason to worry or be scared. A couple of gory death scenes divert, but, just like director Michael J. Basset’s equally terrible “Death Watch”, the initially intriguing set-up devolves rapidly. Everything caves into macho posturing and absurd bickering in lieu of drama, so that it all ends up bellowing such absurdities as “Kill me like a man!” The worst kind of cheap, weak British soap operatics with some kinda juvenile pretensions to social commentary. Avoid.


The Garden
(Don Michael Paul, 2006)
Garbled religiously-themed horror. Lance Henrickson is the Devil in a country old-timer guise, trying to tempt someone to eat from the tree from Eden, growing just outside his house in view of the porch. Everything is undermined by the fact that characters react in an unconvincing manner throughout. All credibility is subservient to plot whim and plot points mostly come to nothing. The boy goes through enough to be traumatised ten times over, but his only reaction is to act piously. Annoyingly pious. There is a religious scientist who tells the boy’s father that the kid has visions of another dimension… and no one bats an eyelid. The boy has a history of self-harm but this doesn’t seem to bother anyone much. When he cuts himself during an obligatory session of bullying, the bully apparently just gets tutted at … and the self-harm comes to nothing. The ghosts of the victims… come to nothing. The visions… come to nothing. When the father and son have a serious car crash, all they need is a little bed rest. When the annoying scientist lady get murdered, no one follows it up. When the boy sees the irritatingly smug scientist lady murdered by the sinister old man Lance… he does nothing and he and the Devil just use Chess metaphors to confront on another. When the Four Horsemen of the Apocalypse turn up, they exercise their penchant for slice-and-dice horror and then… well, then everyone nods at each other, what with the Devil having been defeated and all. One wonders if they are all going to group hug and praise the lord, ghosts and all. There’s probably something interesting trying to get out, but it becomes obvious that there’s nothing to creep the audience out, or to make sense, long before the end.
Posted by Buck Theorem at 10/05/2008