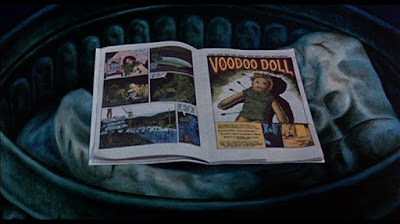 -1-
"Creepshow" has a prologue that is a candidate for the best horror film opening ever. Here’s why I love it: there’s thunder crashing and lightning flashing, and the disciplinarian father is yelling at his son for having a horror comic. What an asshole. That’s Tom Atkins as the asshole and that’s Joe King - horror superstar Stephen’s son - being disciplined. The rhythm of this scene is sublime: the dad chastises and dispenses disgust in the middle ground, the mother agonises in the background, the horror fan in the foreground… the horror fan yells back! "No! It wasn’t like that!" ThunderBOOMCRACK! That’s right, call daddy on his dirty mags. SLAP! Boom! …subside… the storm quietens a little, the kid’s beaten and dad’s the power. And an asshole. He goes outside and throws the comic in the garbage. Some lost chords played by "The Phantom of the Opera" start to play... The comic is called "Creepshow." There’s demonic cackling on the wind. "That’s why God made fathers, babe. That‘s why God made fathers." There are few other film scenes whose cadence has been engraved so deeply in my memory.

Okay, so now we are upstairs and the kid is sitting up in bed, horror posters on the wall, moping. The storm is kicking up again. "I hope you rot in hell!" The curse gargles in his throat and seemingly summons an unearthly sympathiser. And now the music truly kicks in. You are listening to the apex of horror themes now: the piano chords start chiming along with the heavier pounding. There’s a corpse at the window, decayed, almost regal, maybe even melancholy. It’s a real corpse, by the way. Our little fan grins. Our little fan is pounding one fist into his other palm like he knows. He knows vengeance is his. He knows the monsters are on his side. He knows something horrible is gonna happen. Our Creep is cackling, floating into the sky on a wave of animation and beckoning us in.

In this sequence, almost the entire pledge of the horror genre is embodied. You are a fan, it says. And if you are a fan of horror, chances are you harbour a grudge or too, just like fans of action-vengeance films; and maybe you once truly believed in monsters… under the bed, in the closet, in the woods, in the school basement, wherever… and the almost-secret is as much as they scared you, you wanted to be them too. In some not-so-vague unleashed Id-like way, monsters are payback. Yes, says the creep at your window, that’s right. I’m on your side really. Come with me and I’ll show you… The expectation, the sheer promise of this opening is transcendent, thrilling, mouth-watering.

Also note that the openings of all Romero's films are equally as good, and the beginnings of both "Night of the Living Dead" and "Creepshow" both share a dark humour and nail a horror fan's expectations in particular. But there is a gleeful relish in the latter that gives that little extra shiver. 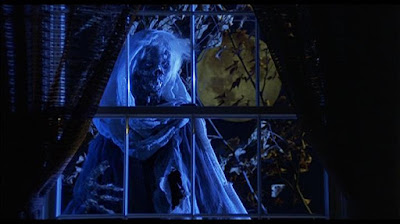 That the rest of George Romero’s "Creepshow" more-or-less lives up to this promise is surely remarkable. It is probably true that it is a fun romp at the expense of the evident intelligence of Romero’s earlier films [1], and that the stories are derivative [2] - but it is more the comedy and the stories are also stock types.

When I first saw "Creepshow"… the first four or five times I saw "Creepshow", it scared the hell out of me. I am thinking I must have seen it first when I was maybe fourteen, and I must have rented it out from an obviously unscrupulous local video store, as I was a teenager. A local newsagent doubling as a rental store, in fact, with one corner crammed full of video cases (later, I worked there). A quick search was going to give you a great, ugly, lurid enticing cover. "Creepshow" also had great promotional covers. One with a skeleton, evidently a relative of The Creep (or, as Tom Savini dubbed him, ‘Raoul’) manning the ticket booth of a cinema-slash-crypt. The other being a comic book cover with the horror kid grinningly reading his forbidden comic in bed, The Creep at the window (this time, bafflingly, apparently missing an eye). Now, as every fan knows, there are a lot of great sleazy horror covers fronting inferior films, but this isn’t one of those. It’s a great party movie too, because it’s funny and scary. I remember watching it in a group several times and just waiting for them to jump out of their skins when the hand leaps out of the grave, and when the crate monster does his thing, or chuckling at "I got my caaake," or Hal Holbrook - in a miniature master class in how to cull a laugh from thin air - trying to stifle laughter from his deplorable wife. It’s a very friendly horror film.

The comic book aesthetic is also great fun: screaming people suddenly backgrounded with lightning-shock-horror; and "meanwhiles…" and "later…" indicated with pages and frames flipping. There’s never a subtitle blaring "AARRGGHH!", but it comes close. These comic book effects are used sensibly, for segues, flashbacks and denouements. The stories are comeuppance morality tales. You know who’ll get theirs. Except for Jordy Varrell. Jordy Varrell is clearly tragedy. Stephen King’s performance is broad and gung-ho, following instructions from Romero to play it like Wile E. Coyote; but I swear when he tones it done a hair, stepping out onto the porch to see his yard and the surrounding land covered in unnatural green-glowing vegetation, I swear King manages pathos. Nunkhead Varrell is just smart enough to know he’s doomed, and therein is the tragedy. It may be the lesser of the tales, but it’s unforgettable too. "How else are you gonna do it?" Romero has said many times in defence of the hamminess of King’s performance.

But the acting really, really elevates "Creepshow" into something special. All round, a great selection of actors take it seriously… tongue-in-cheek, but seriously… bringing the archetypal characters to life. Ed Harris’ (!) funky dance. Aunt Bedelia/Viveca Lindfors stepping out of her craziness at the gateway to the graveyard to show the misery on her face. Ted Dansen’s (!!) easy manner and natural charm enabling an instant bond with our unfortunate adulterer. Leslie Nielson (!!!) having a ball as a bad guy, setting up an elaborate, diabolical double-murder. Hal Holbrook truly remarkable with the repressed fury and the humour he pulls just from the modicum of looks… Adrienne Barbeau totally despicable, broad, and yet possessed of glimmers of credibility too. E.G. Marshall gleefully hateful and swearful. Rarely does a horror film hoard a variety of great and differing performances, treating the goofy enterprise with respect. 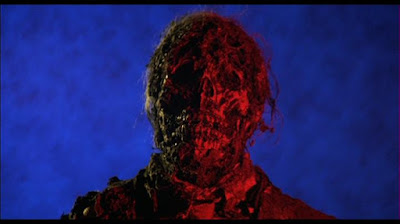 And then there is the soundtrack. John Harrison’s soundtrack is just about the quintessential horror score. The "Phantom of the Opera" piano refrain, the spiralling piano whirls, the chattering ghostly choir. Then, on "The Lonesome Death of Jordy Varrell", goofy all-over-the-show music that seems to be scoring a cartoon somewhere else. With "Something to Tide You Over", suddenly we get music that wouldn’t be out-of-place in any Seventies thriller. The buzzes and atonal throbs of "They’re Creeping Up On You" compliment perfectly the white emptiness of the apartment. Even now, when those first piano chords strike up, it’s like the whole relish of horror being played. The Creep cackles and the spectral choir virtually go "Wheee!" with macabre bliss.

The execution of the whole enterprise transcends the genre storylines and even though it will never be considered the classic that "Night of the Living Dead" is, in it’s own way it is just as successful. It is not only a wonderful homage to EC Comics, but a great tribute to the dark joys of horror as a genre too. It would have been great if, as Romero has hinted he wanted, he had made a series of Creepshow anthologies… imagine that: a genre where he not only gave us the "living dead" films, but a handful of fun comic-book horror homages too. I am, of course, dismissing out of hand the "Creepshow" sequels that we actually have. They are merely stock horror that show up how classy the original actually is. 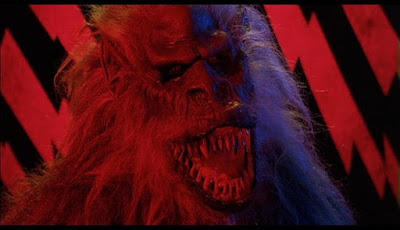 As a footnote, the crate monster evidently terrified me enough to give me nightmares. In the nightmare, it chased me out of buildings, through streets... and I couldn't get rid of it. No matter how much I hid and dodged, it always found me out and I would have to flee again. Finally, I ran to trick it into following me in front of a steamroller... the steamroller struck it, rolled over it from the feet up. All the time its white furry, apish face and mouth full of dagger-like teeth stared at me. And it spoke to me to tell me that it would still come. That wherever I went, it would find me. The steamroller notwithstanding, it seems. This threat of neverending chase and horror made me wake... 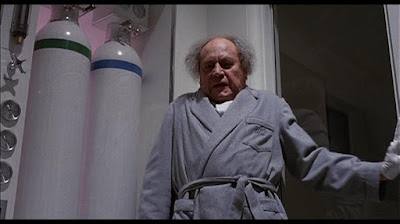 Excellent, as ever. Your enthusiasm is positively contagious. In-film description and criticism aside, your mention of the cover of the video and the newsagent-come-video-store you rented it from gave me a pleasant tingle- not only do I know the place you refer to, but I have fond memories of my Mum's newsagent which also rented videos. I saw many an 18...