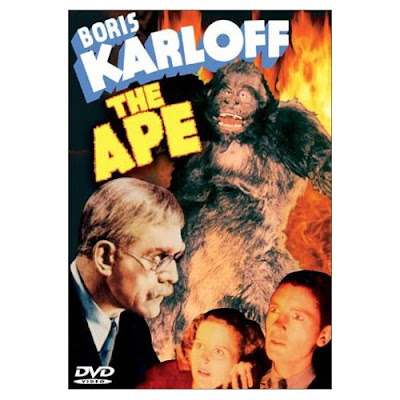 There is nothing I love more than staying up way past midnight and putting on an old black-and-white horror or science-fiction film. I forgive so much in this light. I love it when you doze off a little and then you pop awake and the music - preferably a theremin or choir - is going and the probably-not-very-good-monster is being all threatening.
"The Ape" is a Boris Karloff quickie and, of course, he is the best thing about it. Watch Karloff lay on the gravitas whilst the audience chuckles at everything else. Marvel at the hilarious ape costume! Hear the hokey dialogue! Watch closely as a guinea pig falls off a table as actors leave the scene! Gasp as Karloff pioneers stem cell research! And how is dumping a couple of wandering guinea pigs on a table certifiable evidence that an anti-paralysis serum works anyway? Come on, Dr Adrian-Karloff, we only have your word that the critters were paralysed in the first place. Paralysis, you see, and local ignorance are the real monsters here. And people who tease apes. Certainly they are more unnerving prospects than the ape that breaks out of the circus - and will you see the associated bonkers twist coming?? Dr Adrian is inevitably driven to extreme measures in a Forties' rural town, trying to find a cure for a wheelchair-bound local young woman, Frances. There is nothing forward-thinking here when to be in a wheelchair is seen as making you less than 'normal' and a virtual outcast. Geez, they hardly think she's capable of being wheeled to the circus, and certainly her beau is going to be whole lot happier if she could, you know, actually walk. 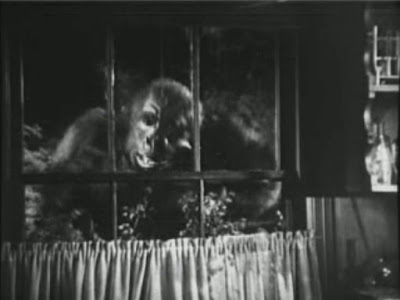 My copy of "The Ape" - aka "Gorilla" - skips, pops and crackles like old vinyl. Somehow that seems totally in order. What I do enjoy about these B-flicks is the glimpse of the era, the general location work: I love the insanity of a scientist working away in an apparently fully-functioning, guinea pig equiped laboratory in his back room; I love the all-American, gun-toting (!!) kids shooting an ape and then running like scaredy cats; I love the stupidity of the whole scenario. What were they thinking? I mean, the whole ape outfit is worth the watch alone. Let me warn about a big spoiler first before saying this: how could anyone mistake Dr Adrian wearing ape skin as the genuine article? What complicates this is that the original Gorilla is so obviously a man in a monkey suit anyway - the mind boggles. It doesn't quite top "Robot Monster" for most bizarre maltreatment of gorilla costume, but it's a bizarre variation.
Written but Curt/Kurt Siodmak, who wrote far grander pieces with "The Invisible Man" and "The Wolf Man". Hmm, apparently based on a stage play by Adam Shirk too! "The Ape" is not a good film, but as a novelty from a long-gone era, it's worth the watch if, like me, you like revelling in the daftness and whackiness of old thrillers like this.
Posted by Buck Theorem at 10/13/2009