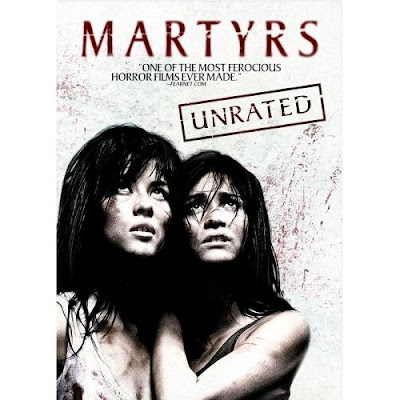 Having been given this challenge by a friend of mine, I was surprised to find I got my list up pretty quickly. The list soon overran, but let's go with the primary ten first:

What do I divine from this list? That 2007 was a bumper horror year. That I really dig the grimy neo-realism of the Twenty-First century extreme horror wave. That a lot of "video nasty" era trimmings are now mainstream. That I really like the fairytale horror aesthetic too. I'm not big on happy endings either. ...Also: I think I missed some good Asian horror and probably a bunch of under-the-radar b-horrors I missed also, the kind you would stumble upon in the golden era of the highstreet video store.

I believe that "Wolf Creek" was also better than its detractors say. Half the films in the list above have key problems, but few films don't. I have seen "Hansel and Gretel" accused of a thin story (not really), and "28 Weeks Later" has calamities triggered by dumb character behaviour, but... well... sometimes a film is good enough for allowances and forgiveness to be given. For example, "28 Weeks Laters" injects a welcome seriousness and attention to mounting fear that push it beyond its formula; plus an opening that may well bustle for "fantastic opening sequence" position with "Dawn of the Dead" (2004).
"28 Weeks Later" comes from my 'fun horror' pile, and I note that there is not enough from this pile that made the list; modest films that I felt transcended its format through execution and gusto (No, I wouldn't count "Zombieland" and "Shaun of the Dead" appears to be 2004; "30 Days of Night" (2007) is enjoyable enough but ultimately evaporates upon reflecction). This "fun pile" has little to do with humour and more to do with the enjoyment of genre tropes well presented. "The Mist" starts and runs as fun and - though there are plenty who did not like it - that ending shoves it off the deeper end into something far more troubling and vital. More fun: The "Orphanage" scores for having a couple of scenes that genuinely gave me the scares and having a genuinely heartbreaking explanation at the end... like "Hansel and Gretel", it overcomes weaknesses through beautiful execution and simple allegiance to the ghost story, moving into pure storytelling. "Hansel & Gretel" could very well be in a tie with "Dek hor", an equally creepy/sweet and beautifully executed ghost story.

Not since "The Blair Witch Project" has hand-held camera felt so vindicated and brilliantly utilised as in "[.Rec]", a point-of-view stance that dragged the viewer deeper and deeper until backing itself into a corner of the genuinely nightmarish. It also allowed for wonderful long takes. An excellent formal approach at the service of the genuinely scary unfolding zombie tale (and you can keep your "Cloverfield"). "The Descent" had a similar shrinking into a nightmare-space trajectory, and ended up a bizarrely emotional experience, seeming from out of nothing more than the standard monster movie dilemmas - something so few manage.

"Haut Tension" felt like a good con trick, but a con trick nontheless, but director Alexandre Aja scored better with me with "The Hills Have Eyes"; perhaps not as 'clever', but a more straightforward, gruelling, silly and grimy remake of the Craven original that holds up well as a nasty piece of gore-and-scares.

My feelings towards "Halloween" remain: it will stand future scrutiny.

Yes, I am calling "The Road" a horror film.

I suspect "Vinyan" could well find weakenesses in one of the top ten and take it's place; upon reflection the film reveals strength and strength and odd places for the ghost story (yes?) that feels pretty damned original and authentic.

As a mixture of post-modern horror and pure story, "Let The Right One In" is sublime. The horror genre at the height of its abilities. I need say no more.
Posted by Buck Theorem at 3/11/2010