The Open Up And Bleeds

THE OPEN UP AND BLEEDS 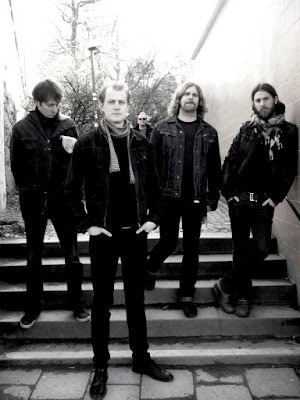 The first thing that you have to do in listening to The Open Up and Bleeds is turn up the volume. This Swedish, Stockholm based band demands you turn it up, possessing a big sound which helps break out of the punkish core that fuels it - a punk rock centre which they happily namecheck: Iggy Pop (obviously), The Stooges, Stiv Bators, Klaus Kinski, etc. Their first album is a fine expansion of what they have been developing for a while: the early recordings on their first EP was rougher with a decidedly storming-it-in-a-bar, almost rockabilly feel. Even then the band’s ease with pop-punk, rousing melodies and songs was obvious, never quite knowing whether to dance or start a fight. Singer/guitarist Joel Segerstedt alternated with a fuck-off and fuck-me attitude, one moment confrontational and the next introverted. One of my favourites from this first release is "Lonely City", about the ironic uniformity of the punk movement: "My little brother is a punk rocker," Joel declares, but the tone is dark, doomed and seemingly grieving. Get it at suicide records.

The next three-track EP revealed that The Open Ups had developed so that now they had less swagger and more epic venturing that included new wave synths and swirls and 10 minute odes to decay of the urban, suburban and personal kinds.

All this remains on their first album. They are quite the formidable unit. It is not that there is anything groundbreaking here, but that the songs are so complete and enjoyable. The Open Up and Bleeds run on words of discontent. Andreas Thunmarker’s drums alternate between patient pounding (e.g. on "OK is not OK) and thunderous explosions. The guitars by Joel and Markus Johansson roll, soar and spike. Thomas Meyer’s basslines sometimes slur, but often are the kind to run through the streets at night to. 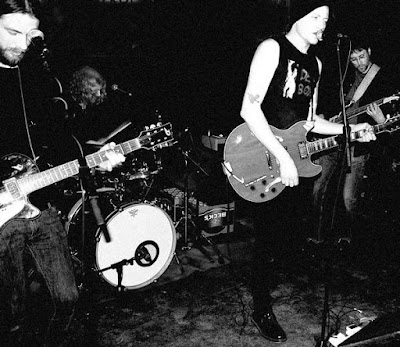 The dissatisfaction is easy to feel… it’s in the slightly strangled but compelling vocals of Joel and the restlessness of the guitars. . The titles are a giveaway too: "OK is not OK", "I Don’t Want to Die", "In Darkest Hours". These are mid-tempo, brooding tracks depicting characters struggling with pessimism and disgruntlement, broken up by bursts of rocking out such as "This Noise". "I’m waking up in such a mess," Joel sings, and it’s thrilling and cathartic.
But it is not all bleak, because beneath this veneer of unhappiness, there are also semi-nostalgic tales of being in bands, as well as much evidence of affection in the numerous named people and small tales Joel tells. The title "Everyone I Know" comes with the suffix "is from bands I’ve been in" and leaves the fourteen year-old protagonist "stuck there" on a stage for the first time; whereupon the song also leaves him stranded adrift an instrumental passage that captures a frozen moment of nerves and self-doubt before giving relief with a final chorus burst. All this to a synthetic pulse that comes dangerously close to disco. Well, perhaps not quite disco, but it does work and is decidedly new wave. It is the inclusion of these pulses and sweeping synths and effects that help to boost the Open Ups’ sound, to help give each song a distinctive feel. With songs like "Stiv Bators in All of Us" and "Let’s Go Back to Modernism", it is hard to think of many songs that sound so tunefully desperate for a smack around.

And then there is "Cut Me A Live One", which finds the Open Ups at their most evocative: "crosses on your eyeballs/and scars upon your chest"; "body bags and stretchers/blocking every the door" (these lyrics are written by Markus; all other by Joel)).The music channels that other Swedish band of disillusionment Broder Daniel, a big and yearning sound whose haunting effects is helped immensely by the subtle, singalong layers of vocal. For me, this track is the true revelation of the album, near impossible to shake.

Rounding up with "The End", the album finishes on a 10 minute epic that feels like a gritty neo-realist European film about the disaffected and alienated. The rush of the whole album thins out into a cacophony of synths, designed to leave you hanging and lost.

And then you are done. It needs to be noted that there is grand, clear production by Henrik Svensson that is notable often in the inspired thunderous drum treatment and vocal layers. The Open Up and Bleeds will not be cast as pioneers, but the music is sweet, the energy infectious, the edginess and anxious essence casting ambiguity over the simplest of statements. It is an album for when you want to rock out; to run away to, to sing along to.

An evident act of love and hate, The Open Up and Bleeds album is a winner; one eye on the darkness and one on the dance floor. It’s a charged, thrilling time feeling bad. I won’t argue with that.