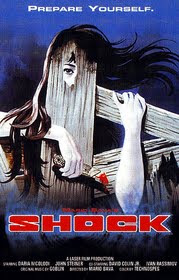 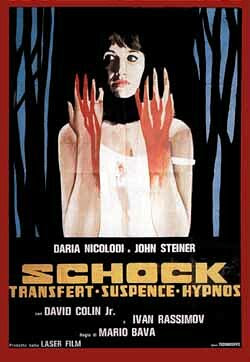 It is surely one of the great unsolved mysteries of cinema why Italian shockers feel that free-form funk-rock is the sound of horror. Take the rather good opening tracking shock through a currently deserted house in Mario Bava’s "Shock": we know this is a horror film, so we naturally expect that this will be a place of fear and frights… but the decidedly jamming music accompanying this shot means we should perhaps play air-bass and shake our stuff. Maybe there will be wine and some little cheesy treats to signify European decadence. The impression is often that the score of another film has accidentally walked onto the set of what we’re watching. When this achieves a wonderfully bonkers effect, this is usually Ennio Morricone; when it is contradictory, it is usually some members of Goblin that are responsible. The soundtrack here is by Libra and is, perhaps aside from the theme, for the most part good, atmospheric and experimental in the best way. 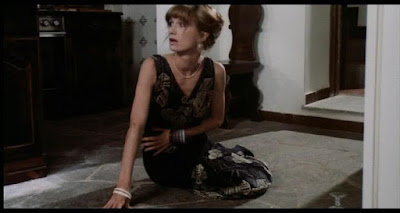 Which goes for "Shock" in general. The funky theme song and some slightly stilted dialogue promise the kind of anything-goes, random plotting and narrative that characterise many Italian giallo and horror films, but "Shock" soon tightens up to something more straightforward and haunting. This time, the mishmash of cash-in features actually increases its range and curiosity value: the post-"Omen" creepy/psychic/possessed kid; an apparently haunted house; a woman with amnesia, recovering from a breakdown and increasingly on the verge of another; some psychic supernatural action; a mild giallo murder mystery. Sometimes a film can shake together a pastiche of regular genre motifs and reach for something more, transcending its obvious derivations and generating some originality and fascination. The best b-movies do this. Bava was influenced by Stephen King, but come the end it is equally "The Shining" and Roman Polanski’s "Repulsion". The story also goes that "Shock" was directed by both Mario and his son, Lamberto - but Lamberto never managed anything so otherworldly and surreal on his own. 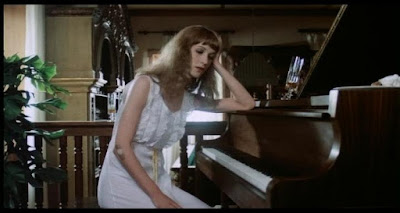 Although there is probably not enough sustained ambiguity as to whether there really is haunting-possession going on or if it is all in Dora’s mind (Dora being played by Dario Argento’s wife, Daria Nicolodi), "Shock" manages to have its cake and eat it too. It cannibalises all of its influences and builds up a quite a disturbance with a little hysteria and strong nightmare sequences which have the flavour not only of "Repulsion", but also of Ingmar Bergman. Moments such as the plane crash induced by the haunting has more in common with the Seventies psychic phenomenon horrors (e.g., "Patrick", "The Medusa Touch"). There is some surprising subtlety: left unpunctuated by overdone melodrama, a moment such as the child simply telling his mother he has to kill her is left unnervingly un-confronted. Occasionally, Bava truly transcends, as when a love-making scene seems under the touch of a ceramic hand (a masterful shot); or when Dora seems to be caressed by otherworldly ecstasy and forces, her hair flowing as if underwater (apparently filmed using a revolving bed, a simple but mesmerising trick). It is these touches that make "Shock" memorable and distinctive, taking a handful of genre tropes and bringing them altogether with . Throw in some oedipal disturbance on this tale of domestic breakdown, psychics and ghosts and it is quite a full package.

It should be a mess, but the different strands keep pulling at mystery and the unpredictable so that the genre tropes are kept mostly in the air and pulled together with offbeat atmosphere, hanging upon the finely realised, memorable set-pieces. There’s no gibbering finale, just an over-long breakdown, some revelations and the inevitable deaths and a creepy open end. 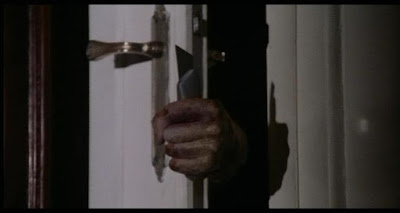