Drag Me To Hell - rerun 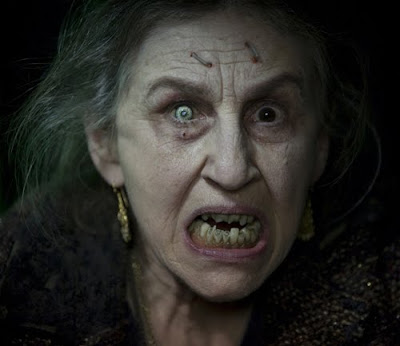 Watching "Drag Me To Hell" again I am struck at how thoroughly it works as a portrait of a woman - Christine (Alison Lohman) - apparently traumatised by an eating disorder and self-esteem issues (first review here), . This, of course, is manifest in her delusion that she is being gypsy-cursed and hounded down by a Lamia demon; a delusion compounded by her unfortunate trust in a bunch of con-men mediums and experts in the occult. She wants to be free from mouth-fixated demons and they want her cash.
With a second viewing, it becomes apparent that the Raimi's know exactly what they are doing, because all the clues and cues are there - how the demon appears at stressful moments when reflecting on how she used to be overweight or confronting food; the many down-the-throat violations also tell us a story. Indeed, the banquet of continuity and logic issues make total sense, and only sense, when in the context of Christine's delusions.
And, which I missed the first time, the subtle clues that her boyfriend especially knows that she has mental health issues. "She needs help," he says when her mother says that Christine is sick. Upon a first watch, I thought the fact that boyfriend's mum comments that Christine is sick was just an indication of her bitchiness, but second viewing seems to hint that, well, she knows something, and so does her son and that's why she doesn't approve of their relationship and it's not all about class.
That the film situates the manifestations in Christine's latent and not-so-latent prejudices and class anxieties is also thorough and pretty bold. She's not exactly likeable, but she's in trouble; she is not particulary deep, but she feels real enough. Particular note has to be made of Lohman's performance too and, as ever, the effects work is exemplary.
My initial review shows how I started off a little lukewarm, but coming back to "Drag Me To Hell" reveals that this may be the cleverest Raimi film so far. It is like a Jacques Tournier/Val Lewton film made by Looney Tunes. I can take or leave the slapstick violence, as incidentally enjoyable as it may be, but as a comedy-horror about failing mental health, this has the weight of subtext that truly elevates horror, and shows what horror can do like no other genre. Here's the cliche: demons of the mind. It also means that "Drag Me To Hell" is bona fide tragedy, and for that I like it more than ever.
People call it a classic, but I am no longer about to quibble that so easily, although my reasons may differ.
Posted by Buck Theorem at 7/26/2010

Labels: demons and devils, Drag Me to Hell, horror