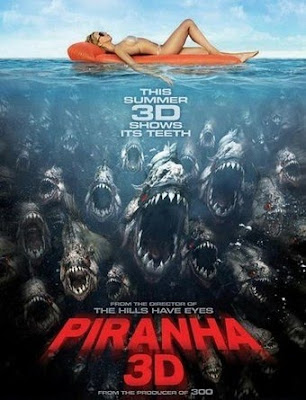 Alexandre Aja
2010- US - 88m
Alexandre Aja’s gore-and-soft-core 2010 'Piranha' remake is so unapologetic in its apparent disdain for audience and cursory intellect that that it is thoroughly critic-proof. Nevertheless, I shall endeavour to outline some key reasons why this piece of shit doesn’t work.
It’s horror for hecklers, for what they call trolls, for those that really have no interest in any investment in character or story. What they want, and what they get, is tits and ass, blood and dismemberment. So gratuitous is it in its misogyny that it ought to be parody (I have a friend who defends it as satire). This outrageous misogyny is the film’s chief joke, extreme gag-gore it’s second. All this is explained by a spring break festival of hedonism based around Wild Wild Girls with constant gyration on boat decks. Girls shake booty; boys ogle. But 'Piranha 3D' offers no commentary: what happens is that this perpetually dancing and lusting cast of extras are so loathsome and vapid that we don’t give one toss whether they live or die. It wants its cake and to eat it to, wallowing in the same crudity it is apparently mocking. The nastiness of the piranha attacks are an end in themselves, and so cartoonish and CGI-buffered that they are empty of identity and really give nothing up for the audience. There is some cursory suspense wherein our key protagonists are stuck on a boat and need rescuing, but the fact that it all ends with an explosion only feels like one more condescension - because isn’t blowing up everything how endings work? - and then this is topped off with a stupid, stupid coda.
How odd that Aja, having staked a reputation with the flawed but full-on slightly tricksy horror 'Haut Tension', seems to have fallen into America by way of remakes that no one really wants. I myself warmed to his updating of 'The Hills Has Eyes' (mostly for its sheer cruelty), but in 'Piranha 3D', his capacity for outright nastiness is anchored to nothing and his sense of atmosphere nonexistent. It is as if the Weinstein brothers, producing, and director Aja know the film was worthless at worst and slim at best and simply threw in more and more tits. Guys will pay to see that, right? Twentysomethings - that key demographic - love to see their own kind acting like assholes and then slaughtered en masse, right? Ever since 'Friday the 13th', we know this. Setting up a cliche and appalling spring break community and then slaughtering the lot isn’t criticism of that culture: it’s just setting up the skittles to knock them down. And they're easy targets. When we get to see a piranha cough up a half-chewed penis, you know horror has reached quite a nadir and the filmmakers don’t care. The audience laughs both with and at the fact that the film has no care.
You may or may not agree that it’s insulting. The audience I saw it with treated it as a comedy, and sure enough it is, but it is the bassist, crassest humour. It has more in common with the 'Scary Movie' franchise than, say, the Joe Dante original. It doesn’t even have the breezy inventiveness and anarchy of Troma Studio’s bad taste films: it’s much, much better made, but aside from the boundary-breaking breast bonanza and general, silly nastiness, it’s really a tidy little package. Inventiveness and anarchy, you see, are not condescending to an audience; simply amping up the lesser qualities of b-horror is. And no, it is not satire either.
As the lead teenager being teased into the spring break craziness by Kelly Brook - rather than, you know, being tied down to the responsibility of baby-sitting and browsing porn on his laptop for light relief - Stephen R McQueen seems to try his best to be a convincing and charming every-guy being introduced to the joys of adult hedonism, but his efforts dissolve into stock scenarios. Interestingly, it is Kelly Brook who, in the brief time she gets, manages to evoke something like an real interesting character: playful, gorgeous, unapologetic, independent, plus mature. Now, if Kelly Brook had been the one to cut through the bullshit and save the kids on the piranha-besieged boat - all without changing her bikini - then maybe there might have been something interesting here, something a little critical of gender types in horror films. That would have been a whole lot sexier and more interesting to debate. But, alas, no: Kelly must go the way of any hot girl who indulges in naughtiness. She has the best and most genuinely amusing joke - the opera-scored nude swimming duet - and seems a wasted opportunity.

Dante’s original is a cult favourite, and no one thinks it’s a masterpiece, but it is mischievous, fun, engaging, satirical, nasty and witty. 'Piranha 3D' 2010 has mostly tedious American cookie-cutter acting, thin characters, a bunch of non-starter cameos (Eli Roth, for one, which might clue you in to the standard), and all the piranha and gore generated by CGI you could want. Oh, and it has 3D. Tits and 3D: that should bring them in. The 3D enhances nothing. The technology may have improved, but 3D still won’t improve a film. It works best with beams of light shining underwater (the underwater lake sequence is the best scene because, for a moment, the films looks genuinely pretty and there is a real, fleeting sense of dread and otherworldliness). Otherwise, it often looks just like bad Photoshop work (the opening whirlpool sequence is especially bad). What we are left with is a horribly cynical horror film cashing in on a relatively respected cult item, puked up over the frat boy horror fan who likes being puked on - because that’s funny; a film with no real shelf-life due to its artlessness. A film that casts American culture as a wasteland of self-absorbed decadence, vapidity, and one that thinks that the tits and cocks of this culture being eaten is the stuff of great sight gags. It’s junk, but not in a good way. 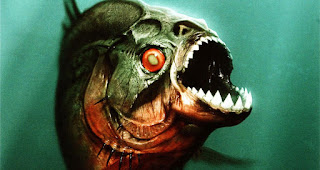