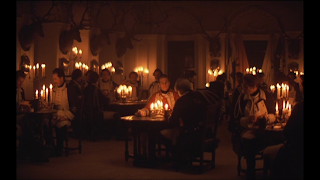 Kubrick imagines Thackery’s novel as a sequence of classical paintings come to life. There is indeed a mostly static, painterly quality to Kubrick’s version of Redmond Barry’s picaresque tale; it is a quality that creates the sense that the drama is not so much in motion as dried before the eye in watercolours and acrylics as the dialogue ossifies into the paintwork. The innovation to achieve this effect was for Kubrick and his crew to utilise new lenses and lighting techniques deliberately aimed at capturing the natural light of the era. The mostly Irish landscapes, castles and drawing rooms are breath-taking, standing in for a variety of European locations. It is a sumptuous visual feast. Indeed, the film’s detractors accuse the film of being all style over substance, but this visual emphasis surely acts as surrogate for Thackery’s literary eloquences and authorial indulgences; how better to translate the descriptive passages of a nineteenth century novel? Perhaps none condemn quite as much as Chris Petit: 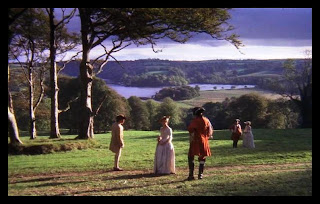 Given the singular lack of drama, perspective or insight, the way the film looks becomes its only defence. But the constant array of waxworks figures against lavish backdrops finally vulgarises the visual sumptuousness


The lack of what might be seen as conventional engagement with the characters may indeed be the point: that is, we always seem to be at a remove from them and never asked to follow their emotional wavelength, but rather to observe. They are mostly all players and poseurs of one sort or another, and how petty they seem against the magnificent countryside and extraordinary halls decorated in gigantic paintings. When we do need to engage, where it seems to count the most are in the instances and issues of parenthood in the film, and here Kubrick does take time to ensure that we connect. This is not only between Barry and his fated son, but also his rivalry with his stepson Lord Lyndon, Lord Lyndon and his mother; and indeed Barry and his own mother. The other characters that register most with Barry are also those that represent father-figures to him, but nearly all these relationships are doomed or absurd. Everyone is so very much playing their part and affecting their role in society that Lyndon’s lies infect even the deathbed of his unfortunate son. But then, what else does Lyndon have but his lies?


Overall, the film is populated by perfectly formed little sequences of dialogue and interaction, acted by a litany of brilliant character actors. We can luxuriate in the ridiculous dandyish mannerisms of the men of titles and money that Barry and his cohort Chevalier de Balibari (a ridiculously made-up Patrick Magee) con of their money. The mostly highly stylised performances are delightful in their detail: consummate, preposterous, just the right side of caricature. And see the minister turn the wedding into a hilariously overheated pulpit sermon; watch as Barry’s humble rose-cheeked mother becomes a formidable pasty-faced matriarch. A personal favourite is Leonard Rossiter’s early turn as a blustering English soldier. It is the men that are the most ridiculous, preening, blustering, indulging in ridiculous duels. Kubrick is quietly scathing at the artificial nature and ridiculous performances of the patriarchy in this society, which is the one that Barry invests in so much that he pursues the status far beyond his means and loses his own self in that pursuit and never seems to learn how artificial it all indeed is.


Redmond Barry himself is a somewhat intangible character: Ryan O’Neill does not possess a twinkle of eye to make Barry a rascal and, although he is certainly treacherous and mercenary. But we never really get a grip upon him. Perhaps then this is the point: he is trapped in the ever-changing events of his own life. Desperately trying to manoeuvre himself around the other players on the social stage, coveting their positions, Lyndon lies, elaborates and trudges on ahead to any token status he can get himself into. This is why, when he finally marries Lady Lyndon (Marisa Berenson), he barely knows what to do in the marriage except have affairs and put on airs. The impression is that O’Neil only really finds his footing and actor’s strengths in his role as a father, and the loss of his son being the one sequence of true emotional resonance. But actually Ryan gives a great anti-performance, as Jason Bellamy elaborates: 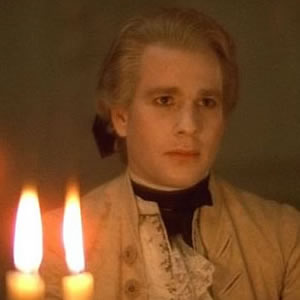 for the most part his performance is quiet, reserved, inward, even when Barry is puffing out his chest with pride or arrogance. It's an approach that serves the character well, underlining Barry's lack of original character, right down to that light Irish accent that sounds as if Barry was never fully invested in his roots. O'Neal is, in essence, an actor playing an actor. And what's remarkable is that while Barry is always in the midst of a performance, O'Neal never seems to be.


Perhaps the weakest link is between Lord Lyndon in his incarnations as a boy and as a man: the casting feels inconsistent. As a child, Lyndon is played by Dominic Savage, who comes across as composed, watchful and defiant; as an adult played by Leon Vitali, he suddenly becomes immature, over-emotional, possessed of a sobber’s mouth given to quivering at all concerns.


What “Barry Lydon” also possesses is one of the greatest voice-overs in cinema. Where most are redundant and insulting, Kubrick offers a droll, amusing, critical, detached commentary, perfectly voiced by Michael Hordon. Its commentary allows criticism and narrative flow; it does not so much guide, fill in gaps or tell you what you are already seeing; rather it waves its hand archy, points and shrugs and pours another drink whilst elucidating on the cautionary tale that is Barry Lydon’s life. It does not truly moralise either, keeping its aloofness to the end so that ambiguity and our own conclusions can be made.


In a discussion about ‘pure cinema’ ~ which is seemingly to mean the triumph of the visual over narrative ~ it seems incongruous that “Barry Lydon” has seemingly met with the most indifference of Kubrick’s oeuvre as a pretty piece of nothing when modern critics are enraptured by the arguably indulgent gesturing of Malick’s “Tree of Life”. Kubrick’s film is about the superficial, the pursuit of it when natural beauty is in plain sight; it is about the rotten absurdity of Nineteenth Century society and a dry scathing satire on the pursuit of money and celebrity and all those shiny tokens that have led many to lead empty lives. And Barry’s life is ultimately an empty life, a search for all the wrong things. If he ever becomes self-aware is left open to conjecture by Kubrick, but there is no doubt that it all plays out like pretty tragedy and farce. Also, it is surely one of the greatest period pieces ever made, as much as ‘2001: a Space Odyssey’ and ‘The Shining’ are the epitome of their respective genres. 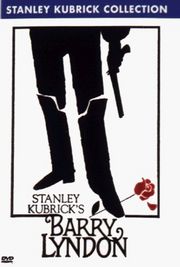