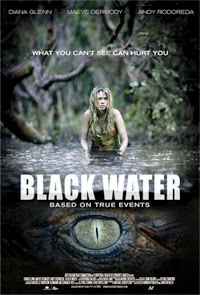 | David Nurlich & Andrew Taruk, 2007, Australia, 90m
Excellent streamlined killer crocodile horror. Amazingly, directors David Nurlich and Andrew Taruk decide that crocodiles are terrifying on their own: you don’t need them supersized, mutated or CGI-ed. And you don’t need them to be seen all the time either: that old adage that what you can’t see and what you imagine is scarier than what you do see. Our fated protagonists are a couple with a sister in tow who jump in a boat and let the guide take them way, way out into the Australian rivers. Before there has been any time to set-up, the crocodile has attacked and our protagonists are stuck up the winding, brittle looking trees. Two thirds of the film is what they do when trying to escape out of those trees. As writers, Taruk and Nurlich don’t try to be too fancy with characterisation: in fact, these may well be some of the most average and relatable characters ever put in a b-movie. Oh, I am sure there are those who would want something showier, but the ordinariness of our imperilled characters strikes me as exactly the winning presentation. It is easy to care about them without having to treat them as heightened archetypes. 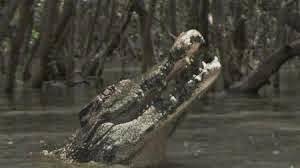 This is a prime example of a low budget film using its limitations and restrictions to its advantage. It sets up a near impossible scenario and doesn’t cop out with easy solutions and implausible behaviour. In fact, what truly makes “Black Water” stand out is the convincing mental shifts, the deterioration and the resourcefulness of our characters. It is properly concerned with terror, but also the effects of it; for example, the women’s initial denial of what needs to be done, then their growing courage out of necessity without any recourse to obvious heroics. The ending is unusually bold in deploying the more mundane and heartbreaking effects of experiencing such horror on a person.

The show pieces are vivid: the most beautiful being the electric storm at night. More importantly, the reveals and appearances of the croc are all chilling (slowly coming into view) or terrifying (the fast attacks). Nurlich and Taruk also don’t overexpose the croc and execute brilliant and brief digital trickery to put it at the scene  leading to a finale that doesn’t rely upon a big grand showdown, but rather simply relying upon the frighteningly intimacy of an attack.
Posted by Buck Theorem at 11/01/2014