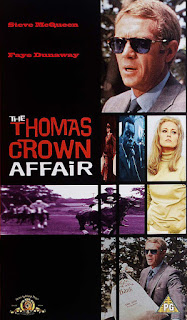 
Steven McQueen is Thomas Crown, who earns bucket loads by the minute and yet money doesn’t give him the thrills and spills he needs. Needless to say, for these he turns to crime. He plans a nifty, swift, slightly clever bank robbery (it helps that the bank doesn’t seem to use a secure back door to shift money). The famous theme song, “Windmills of Your Mind” seems to be broadcast from a different, more hippyish film; but not to worry, it remains memorable. Norman Jewison throws some hipster split-screen mannerisms and snappy editing and a little nasty leg-shooting to keep things interesting. McQueen-Crown retreats to laugh his head off slightly maniacally at the success of the robbery. The police have no clue whatsoever. So far so good.

And then, Faye Dunaway struts in as a supposedly brilliant, ruthless and inevitably flirty insurance investigator Vicky Anderson and the film becomes something far sillier. She takes one look at Crown’s photo and decides that he is responsible, apparently for no other reason than he is played by McQueen and so she fancies him. This is not to be a sleek, cat-and-mouse suspense machine but rather some kind of screwball thriller, meaning that - even if we accept that Dunaway has some preternatural, groundless intuition about McQueen’s guilt - they then embark upon a succession of flirty meetings. This, despite the fact that he knows she is investigating him. Even given his desire for danger, it’s ridiculous. And then Dunaway goes off and kidnaps children, has cars stolen, etc: we are perhaps to find the amorality of these star characters hip, perhaps daring. The laconic atmosphere is supposed to denote “cool”, but the screwball genre, however, has an inherently silly inclination and this scuppers any thrills as quickly as McQueen flashes his smile and Dunaway changes wardrobe. “Screwball” also means that the film is more interested in stars than characters and internal logic.

Then suddenly, at about the point where they fall in love over a game of chess (wait, perhaps that symbolises something…?) the film decides it’s going to be some kind of romantic tragedy. By this point, a lot of things are happening just because they are happening. The problem is also that a lot of the romancing is unintentionally asinine, like those terrible middle-aged ballads. What is at stake becomes dissipated, leaving not so much when all the action has already happened.

The police are nowhere to be seen. Dunaway has fallen for McQueen. We spend a lot of time with them dune-buggying on the beach. There is some action when McQueen knocks out one of the men following him (and standing in the street in full view… is he a rookie at this spying game?). Suddenly, in a sauna, McQueen is saying he is the one responsible. Then he is telling her he will do another bank job and she is trying to talk him out of it. The second bank job gets short-changed because it is no longer featuring in a thriller as such, scrambling as it does for some poignancy. So, come the end, we see that McQueen-Crown has been stringing her along all along. Okay, but this still leaves much high-and-dry. For all the star quality, there’s no need to actually care about the main characters apart from their prettiness, and all the fun stuff started at the beginning when they were barely around. 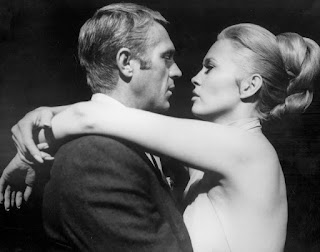