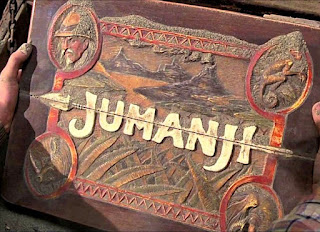 Based on Chris Van Allsburg's book, like all the best children’s fantasies ‘Jumanji’ threatens to turn very nasty at any moment once the children are called by the eponymous boardgame. Rolling the dice, they have to confront its malevolent jungle forces that break out into the real world. First up in 1969, bullied rich kid Alan (Adam Hann-Byrd), having argued with his somewhat wealthily conservative parents, hears the drums of the game calling him and promptly disappears for the next twenty six years. He turns up then when orphaned Peter (Bradley Pierce) and Judy (Kirsten Dunst) move into the house with their aunt and discover the game, only to start up Alan’s game again. This time, though, Alan has turned into Robin Williams, in another of his Peter Pan guises. Luckily, Williams is never allowed to overwhelm the proceedings and pretty soon there are ‘Gremlins’-like monkeys and stampedes of animals tearing up the surrounding town. 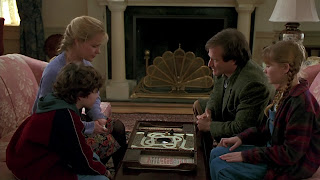 Relatively modest and character-based, ‘Jumanji’ is noisy and brisk entertainment whose only real failing is a Disney-sentimental infrastructure based on family – but that’s to be expected. The game itself is, quite rightly, given no explanation, but appears to be concerned mostly with bringing a little danger and character-building confrontation to alienated and lonely kids. The kids themselves are engaging enough, if somewhat indistinguishable; Jumanji itself manifests their inner turmoil and sense of a chaotic, destructive world. Of course, how Alan survived trapped in the game for twenty-six years is never explained, but all the unanswered possibilities about the game only serve to fuel its mystery ~ and to wonder how it avoided the seemingly inevitable sequels.* Built upon ideas of lost time, the film manages to avoid the nostalgia it might have wrought in jumping from the sixties to the nineties. The sixties are semi-idealised and the nineties are grey and depressed; it is Alan himself who delays this transition by inadvertently destroying the symbol of impending consumerism and capitalism, a sports sneaker. It is Alan who symbolises something old-fashioned and traditional, whose final guise just happens to be Father Christmas. Darkest of all has Alan’s father (Jonathan Hyde) turn up in the manifestation of a relentless manhunting Victorian, hunting down his son like an animal in order to force his offspring to confront his fears

But more than all this, ‘Jumanji’ is a special effects film and they are impressive – by Industrial Light and Magic’s and Amalgamated Dynamics - although of course they are of the time. They stay just the right side of neo-realism, they are just a touch cartoony, so that all the animals remain the conjuring of the game, of an alternative reality. Best of all is the stampede and Williams sinking into floorboards like quicksand whilst beset by giant spiders. And although it’s played as a punishment, little Peter surely lives out a boy’s fantasy when turning into a monkey. 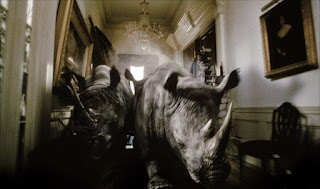 • Of course, there was  ‘Zathura’ in 2015 which was seen as a kind-of sequel, being of the same idea, and at time of writing a remake/reboot of ‘Jumanji’ is pending.