Terence Fisher again helms Hammer’s continuing vampire saga. Four British tourists travelling through the Carpathian Mountains find themselves the means and breakfast for the revival of the Count, instantly recognisable by now as Christopher Lee (as opposed to Bela Lugosi).

There is less overt seduction in this episode of the Dracula resurrection-destruction cycle: rather, there is the threat of being lost in a strange land at the mercy of malevolent foreigners and, worse, becoming one of them. It is the woman most prim and proper, most Victorian, repressed and fearful in manner who is converted into a sapphic vampiress. As usual, the war between Good and Evil, between civilised romance and bestial lust is fought on and over the female form. Even female vampires cannot resist the woman’s blood. A man is beheaded [-castrated] and his blood pours out to resurrect the Count. This resurrection is the film’s one true moment of gruesome excess, with Dracula’s servant Klove hanging the victim over the count’s ashen remains (having been destroyed by the sun in ‘Horror of Dracula’, and absent for ‘Brides of Dracula’) and slicing into his neck; in the original script, the decapitation was far more obvious, with Klove throwing aside the head, but the British censors objected and the scene was muted.

With Dracula resurrected, he quickly converts the

most frightened woman to his cause and then sets about a strange competition with her for victims; it is like the immoral, lusty daughter competing with the vampire father of date rape. This Dracula is, however, mute this time around (as David J. Skal puts it, “supposedly … something to do with Lee’s salary and a distaste for the original script”*), making him even more primal than ever, dashing around and taking his women rather than lulling them into submission. Key vampire traits are all present: fear of sex, fear of the foreign, big deserted houses, dark, forbidding locales, hints of lesbianism, culture clashes, religious hysteria and the protection of faith, et al. There are the quietly paranoid and hysterical locals who continue to stake their daughters ten years after Dracula’s original demise, as if they cannot trust even the dead sexuality of female bodies. Here, using the fractured nature and ‘states’ of Germany of the era, there is also the clash between old-fashioned Puritan religion (the opening funeral mob) and the less strict but no less devout monk played by Andrew Kier. It seems relevant that this apparently progressive monk totes a gun ~ which, of course, he never actually uses. 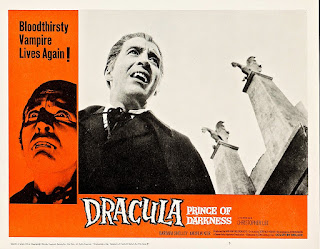 The film’s other memorable moment is what David J. Skal describes as “a gruesome, quasi-gang-bang involving a group of monks, a female vampire, a table and a stake.” All the rape metaphors inherent in vampirism are present. It seems appropriate that it is the one, nearly-raped female who fires the rifle shot that begins Dracula’s watery demise. Ultimately, the film scores in its stripped-down narrative, but mainly name-checks vampire folklore before a mildly spectacular finale (which, in a typical winning Hammer trait, closes the film abruptly with Dracula barely dead before the credits roll). The frigidity of ice had been shot and cracked, and the vampire has been repressed beneath once more. 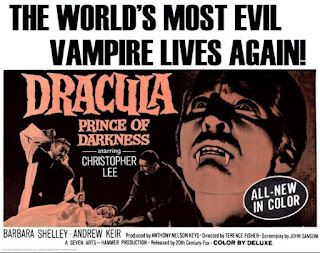