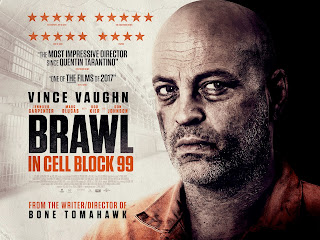 Bradley Thomas is having a bad day: he’s just been fired and goes home to discover his wife (Jennifer Carpenter) is cheating. He turns to drug-running to resolve issues, but this is not to imply he’s just a scumbag or weak-willed: rather, he’s just a pragmatist that does what he feels needs to be done. But he has the ultra-violence and savvy to back it up. Nevertheless, getting involved with bad people eventually only leads to more trouble and a descent to cell block 99 and there’ll be no more turning his back on a violent nature.

The cover blurb quotes The Hollywood News saying “The most impressive director since Quentin Tarantino,” but S. Craig Sahler has in Bradley Thomas a character that cuts through all the verbose digressions and bullshit to the bone – the kind that both Tarantino and Vaughn are known for. Vince Vaughn plays Bradley with less of the Clint Eastwood existential machismo or Charles Bronson’s disinterest, but rather like ‘Point Blank’s Lee Marvin striding in and just punching without fanfare. The only one that seems likely to veer into broad villainous caricature is Don Johnson’s Warden Tuggs, but that turns out to be something of a red herring, despite being a lot of fun. 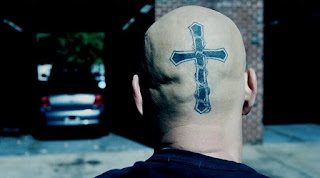 Bradley Thomas is someone who appears to have mostly turned his back on a life of violence but he triumphs at it when he unleashes. Sahler’s previous film ‘Bone Tomahawk’ established that he excels at extreme violence (very few times have a felt an audience so physically reacting to a killing), and ‘Brawl’ doesn’t disappoint. There is bound to be one or two moments that will lodge into your memory as un-erasable once seen. If films like ‘The Villainess’ and ‘The Raid’ are about skill, this is about brute force and in keeping with that candour action is not conveyed through fast cuts but rather unflinching straightforward shots. It is Vaughn’s hulking physical and terrifying directness that is likely to be most memorable. 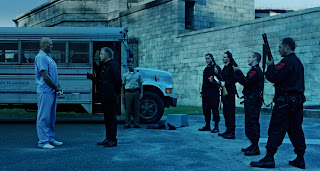 There’s nothing new in the narrative but it’s all executed with a slyly fated and doomed air as if this is more than just riffing on that exploitation staple of the super-violent man hammering vengeance on all and sundry. But it’s very much grindhouse brutality through arthouse melancholy, the latter somewhat shaving off the rough edges of the former, making it gratuitous and restrained at the same time. There is none of the thoughtfulness on the topic of violence and community here that ‘Bone Tomohawk’ offered – indeed it appears that this was written beforehand – but that’s probably moot when you are flinching/giggling at the excess. ‘Brawl in Cell Bock 9’ offers movie violence and a more-or-less unbeatable fantasy male in a probably never-better Vince Vaughn performance. It’s a straightforward guilty pleasure where Zahler’s pacing and skill subscribes to a sincerity beyond trash even as Udo Kier is talking about dismembering foetuses and heads are being stomped.