'The Shape of Water' and irksome wonderment 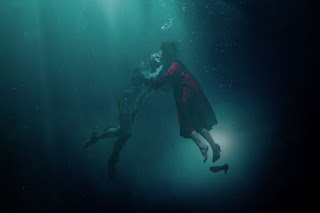 Despite any originality in the premise, Guillermo Del Toro’s fishman-and-woman romance unfolds predictably, being the kind of tale that Mike Mignolia turns out in his sleep. Although the art design is sumptuous and the players devoted in reliably Del Toro style, there is something a little sloppy at the edges as if it thinks its pretence to romanticism is enough. Actually, Mike Mignolia would not be quite as sentimental. You know how it is all going to play out: this is just a routine persecuted-outsiders-in-love tale for Forrest J Ackerman fans. Yes, it’s a romance about a woman and a fish-person (someone on social media called it ‘Grinding Nemo’), but the narrative is quite safe and pulls a shower-curtain upon the truly tricky stuff. 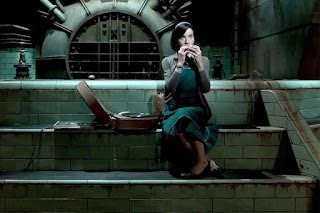 telling that this spends equal if not more time with Richard Strickland (you know: the real monster here) because that has more substance. After all, Beauty-and-the-Beast is a standard genre trope. Michael Shannon is too entertaining and skilled for sadistic Strickland to be anything but intriguing, but a less offbeat actor would have immediately shown up how two-dimensional and hammy the character is. Michael Stuhlberg as Dr Robert Hoffstetler is far more fascinating and possessed of layers (and because he too is better than the material). More importantly, it is hard to find Elisa Esposito’s character beneath all the knowing smiles and symbolism as she falls for the amphibian, despite Sally Hawkins’ committed performance: for example, she has no voice and was found as a child near water as an orphan; the marks on her neck that apparently make her mute look like gills; she masturbates in the bath, linking sex and water, etc. But then again, maybe these are all clues that she might be an amphibian too – this would make sense of the flooding-the-bathroom scene which doesn’t really address the problem of drowning – but then there would be more questions raised by the domination of her air-breathing persona (she would surely know she is amphibious by the time we meet her, but there is no indication of this). 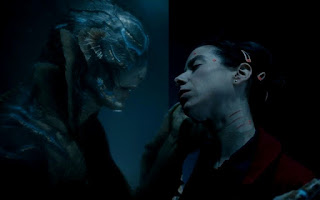 This half-baked thinking dogs all the details, such as much is madeof a single security camera but there seems to be no cameras or security at all surrounding the actual prize creature. Or a bathroom becomes a water tank and floods… but there’s no attention to the damage this would surely cause (it floods the cinema below, but this leads to nothing). Or when Elisa and the amphibian have sex, she pulls the bath curtain as if to gain some privacy from the audience, even though there has been a graphic sex scene with Shannon beforehand.* The graphic sex is saved for the monstrous human but there’s no visual evidence of the romantic possibilities of intimacy for the amphibian (I mean, he sparkles colours which is pretty but that isn’t quite enough). And then everyone just accepts this interspecies relationship as the epitome of romance. Borowczyk’s ‘The Beast’ surely bursts the bubble of this. The amphibian itself (Doug Jones) is given so little character, despite evoking pity, that it comes close to Elisa simply projecting onto him as if she saving a puppy from a mill. It just protests so hard at being romantic, its nadir being two raindrops merging into one, that it becomes as enamoured with itself and is just as uncomfortable as a ‘Love is…’ cartoon. Love is … an amphibious god-like humanoid that will kill the nasty man. When such details of internal logic are left wanting, it’s in danger of being a house of cards that will collapse with the merest prodding. 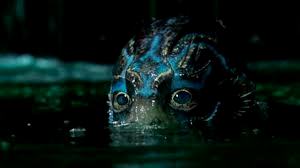 That it’s a fairytale is meant to excuse any lacunas, but its sense of its own wonder of wonderment is as narcissistic as Disney with very little that is independent of its own magical magicalness to earn genuine characterisation or investment. It all feels a little unearned. A paean to cinema must surely do more than just indulge in its own homage (of course the lost monster will be found mesmerised in a cinema). Even ‘La la Land’ took time to show why music can be so important to people by demonstrating that a whole alternative and romantic story can be imagined in a song. ‘The Shape of Water’ rests upon a well-worn love of black-and-white movies and musical numbers because fantasy is so close to nostalgia. For all its elegance, it’s often about a subtle as a glass of water thrown in the face, followed by a handful of glitter.

I felt ‘The Devil’s Backbone’ move into pure story was a delight and ‘Pan’s Labyrinth’ is surely about how fantasy makes harsh realities bearable, even if cognitive dissonance solve nothing, but ‘The Shape of Water’ starts at the pitch it means to go on with no shifts or questioning of its own reality. It's not quite as art-design-over-substance as 'Crimson Peak' but its lack of inquiry into its own basis means is a movie-movie and that an audience may find themselves probing at its weaknesses and finding it unsatisfactory. But a lot of people have taken it at face value and found it emotional. I myself am thinking that (like Nolan’s ‘Interstellar’ which I had similar reservations about on a first watch) I may find myself more accepting and less prone to criticism the second time, with a less demanding eye. As it is, I found it entertaining enough but unconvinced by its conviction in its own magic-realist poeticism. In the end, I found that more irksome than moving. 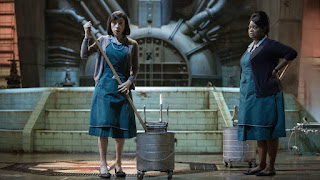 • Here is another moment that suffers from the lack of clarity or follow-through that typifies the script: Elaine Strickland (Lauren Lee Smith) seduces her husband for consensual sex, but then the scene is filmed and executed in an aggressive style that is typically coded for a rape, especially when Strickland tells her to be mute and to relinquish her character. But they have had kids together: has he never acted this way before? If he has, is it something she likes as she instigated this sex? If she doesn’t (and the moment hints her reaction isn’t fully consenting), then where does it leave their relationship? What does this say about her and consequently him? There is no follow-up to this so we do not know, leaving her character somewhat underserved.
Posted by Buck Theorem at 3/17/2018