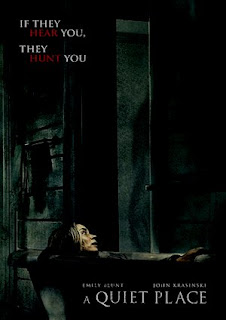 John Krasinski, 2018, USA
‘A Quiet Place’ comes with a defining concept – monsters are attracted to any noise – designed to make anyone eating popcorn and opening sweets and chocolates in the audience act like the characters onscreen: delicately, cautiously, painfully self-aware. Every chair squeak in the auditorium is likely to be heard. Myself, being a good cinema-goer, I only buy quiet food (pastilles and chocolate that I open before the film starts) because eating popcorn loudly and talking through films really ruins the experience for me (he says with understatement) – but even I had a slight coughing fit during the film, made only worse by struggling to suppress it. It’s a film with the emphasis on the tiniest sound without necessarily being quiet itself: there’s Marco Beltrami’s score that underlays without quite disturbing the focus on silences; there’s the roars of the monsters and a cameo from Neil Yong’s ‘Harvest Moon’, for example. Even so, you have been warned that you can’t talk through this one without causing the ire of other audience members; that is, more than usual. Like Lynne Ramsey’s ‘You Were Never Really Here’, it’s a film that wants you to pay attention to the sound design. 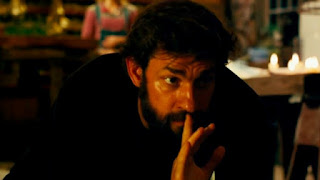 Having established the concept and the high stakes from the opening – because kids want to be kids even in this scenario, which is a major theme –‘A Quiet Place’ focuses on a few set-pieces, sidestepping many demands for exposition and background information, not to mention internal logic – wait, so how would it work that these creatures seemingly decimated the human population? – and gets on with the job of racking up tension. Some context given by fluttering old newspaper headlines and notes written on a board but these are mostly things we have already intuited. Then there’s mum Emily Blunt, who is good at being stoic, son Noah Jupe, who is good at being vulnerable (almost unbearably so in ‘Suburbicon’), dad and director John Krasinski trying to do his best paternal protector thing and daughter Millicent Simmons finding she can’t quite go full stormy and noisy troubled teen because she has to be mindful of the monsters. She’s also deaf which gives the family an advantage in already knowing sign language. 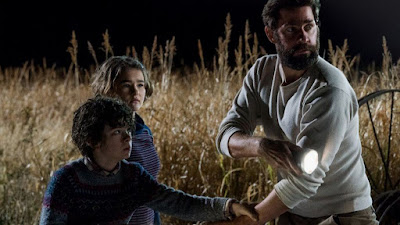 Nitpicks could be found in that why does it take hundreds of days for the dad to show the safety of waterfalls to their son; or wouldn’t the military have worked out the monster’s weakness long before and let everyone know? There’s a baby on the way too, which is surely a bad and irresponsible choice, considering (but what else are they going to do? And thankfully it’s mostly quiet when it comes). But these matter less when there is plenty of attention paid to piling on the suspense.  When the majority of a film is doing so much else rightly and strongly, the constant questioning of internal logic isn’t such a priority; a few things can slide. (For example, there’s a lot of doubting the workings of the monster in ‘It Follows’; and where is the security in ‘Blade Runner 2049’ to stop Luv from just walking into the police station? And why aren’t they wearing Hazmat suits in ‘Annihilation’? etc.) But picking apart isn’t so rewarding when the set-pieces are strong and the main concern is to simply have some genre fun.

The grain silo and a flooded basement are highlights. 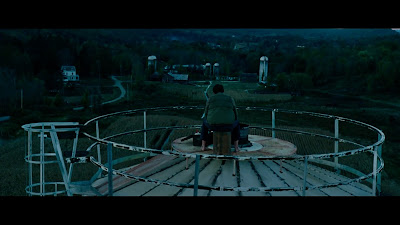 The monsters are big, all angles sticking out plus over-complicated head-and-ear designs, but that’s fun too; they are simply the bogeymen to scare and to be overcome. Mostly, the story is simply “surviving the set-pieces” and Krasinski directs cleanly and with care, despite some confused editing, forging some unforgettable images – the bath in the foreground and the thing coming up the stairs in the background doing its best 'Nosfertu' impersonation; the monster almost blending with the shadows in the cellar, for example. The main theme seems to be “If we can’t protect the children, then what are we?” (which is surely political - he says with understatement), but mostly, despite its downbeat veneer, this is a focused action piece that delivers tension and scares with the minimum requirement of nuanced characterisation  and bloodletting that is a true crowd-pleaser.