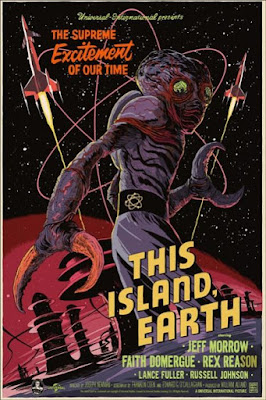 One of my fondest film-watching memories is when I was living at my grandparent’s house as a preteen and getting to watch the b-movie season playing over months and months on television. I was about eleven or twelve and I loved getting into my pyjamas and watching these films on a Sunday evening before bed. I saw so many of the black-and-white creature features this way; my personal education to the drive-in horror and science-fiction era, as if I had been born decades earlier. I know for sure that I saw “The Beast from 50,000 Fathoms” and “King Kong” and “It Came From Outer Space” that way, as well as “It! The Terror Beyond Space”, “Earth versus the Flying Saucers” and “This Island Earth”. 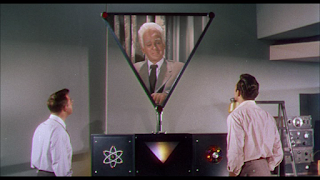 “This Island Earth” is kind of an honorary classic: it’s not a classic due to story and execution, for it has some of that workmanlike clunkiness and flatness of the era, but the whole is definitely greater than the parts. It looks and sounds like a tacky Fifties sci-fi, but it is much more if you play into it. It has decent and decidedly adult characters; it has a nice air of menace and mystery and a fascinatingly ambiguous relationship with its aliens. The aliens are the kind you are likely to meet in “Star Trek” – intelligent, humanoid and talky with over-sized foreheads so that they can seemingly pass for human, but they are more than typically two-dimensional. They are a threat in that they are a civilisation – from Metaluna –  on the brink of being wiped out by their enemies and both need Earth’s help whilst simultaneously plotting to colonise Earth. But they are desperate rather than cruel or megalomaniacal. The film’s classic status is surely down to the fact that it is quintessential Fifties-era pulp sci-fi and that’s a lot of fun and no bad thing. It also has a slow build-up that is rewarded with a fantastic if brief visit to Metaluna itself, a gorgeous cosmic vision with comic-book colours and mutants, one which rivals “Forbidden Planet”. 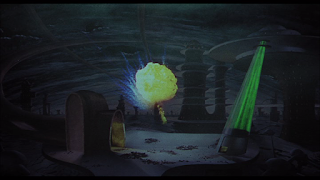 “This Island Earth” is full of green rays, flying saucers, manipulative but super-smart aliens, decidedly square-jawed scientists (Rex Reason) and equally unlikely science. It looks and acts like something from an “Astounding!” magazine cover, and that’s integral to its delight. The film worries about other cultures being smarter, more manipulative and colonialist, but trusts its American square-jaws and female vulnerability to get an Earthman through an extraterrestrial encounter. It is dated, but that doesn’t seem to do it any harm. It gets better and balmier as it goes on and has the good sense to throw in some alien mutants too to spice up things. 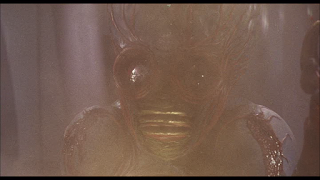 Yes: the mutants. These insectoid aliens gave me a nightmare that I have never forgotten. They were lumbering, soundless and – well, you can’t get much more alien than insects. They don’t have much screen time, although they are plastered all over the posters, but hey are unforgettable. I dreamt that I was on the spaceship standing inside the giant transparent tubes it had to condition people to different environments; my dream was paraphrasing the spaceship and a scene from the film. One of the mutants was going crazy on the flight deck, just as in the film, and I was stuck in the tube. The difference was that there was a gap at the bottom of the tubes so that feet, ankles and lower shins were horrible exposed. The alien came attacking the tubes and I was trapped inside and, eventually, it started to attack my feet at the gap at the base of the tube. I suspect I woke up during the attack. Oh yes, it was quite a nightmare and I’ve never forgotten it. For this reason, I have quite a soft spot for “This Island Earth”. 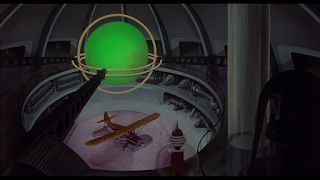 It remains a delightful slice of pulp hokum with an odd charm all its own. It doesn’t have the resonance and deep chills of, say, “Invasion of the Body-Snatchers”, but it is old school fun and possessed of enough intelligence and gorgeous alien scenery to more than hold its own. 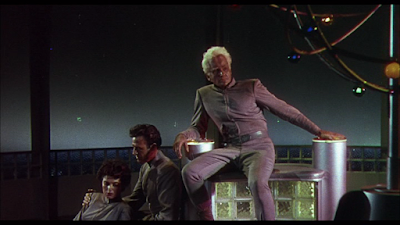 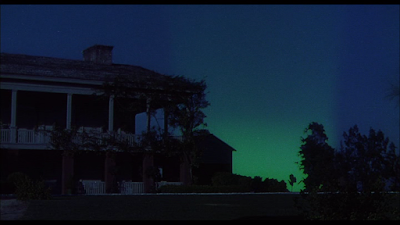 Yes, very good aliens. I think I first caught this one on a weekend afternoon; I remember being impressed by the first sight of Metaluna's surface (rather less so by the MutAnts™ and by the routine reduction of Faith Domergue's character from scientist to screamer) and with the aliens having factions, just like the human beings whose future they may represent. I still find it very watchable.

Pedantry note: the lead actor is called Rex Reason, not Reardon. It seems too good to be true (especially as This Island Earth is among the less anti-scientific SF pictures of its time), but apparently it was his real name.

It's certainly a little bit too much of its time - with gender, for example - to truly transcend itself, but the treatment of the aliens with some ambiguity and the fact that it's almost the epitome of the era's sci-fi pulp makes it a winner. And I still find the MutAnts™ will always give me the creeps as they scared me as a kid. I like its comic book use of vivid colour too.