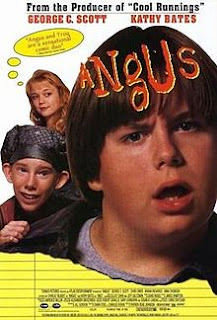 screenplay: Jill Gordon ~ from a short story by Chris Crutcher

“Fat kid” Angus’ (Charlie Albert) ambitions in life veer between talking to Melissa, to stop being picked on and to go to Jefferson. His only friends in this are his truck-driving mum, his ever-dozing grandfather who is over seventy and just getting married, and his geeky pal Troy. Luckily, coming-of-age conventions will help out and he’ll get his moment. 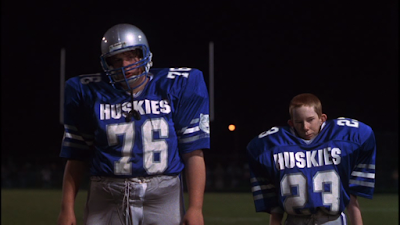 ‘Angus’ is conventionally and agreeably on the side of the big kid, and it’s funny and winning enough and not quite as smug as something offered by John Hughes, but it’s firmly embedded in tropes and predictability. You’re unlikely to miss its message of “freaks” being absorbed into the “normal” – his suit is plum and everyone else is in blue: wow! the same colours as his science experiment!* – but if you do somehow miss it, even though it’s been hammered home many times, Angus will speechify it at the prom showdown. For the most part, the agenda reaches the tenor of one of the tossed-off faux-poignant slogans projected on Troy’s bedroom wall: “Love stinks / Reality Bites”. It’s set at the same level of insight and symbolism as a TV show for tweens… and it’s true I probably bought into liked it more when I was younger. It’s one of those American Teen movies designed to be a reassurance and outcry against the realities of an outsider’s existence. 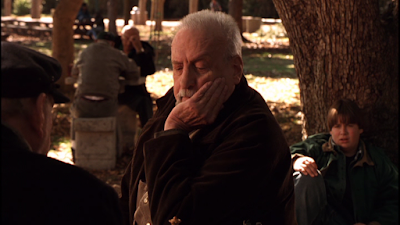 Each character is defined by how they don’t quite conform, as if they’re wearing allocated badges. Angus’s mum is a truck-driving, arm-wrestling female, challenging gender stereotypes but sadly not using Kathy Bates enough. There is Grandpa Ivan (George C Scott), dozing off at strategic moments, playing chess in the park, but at 72 (oh, 73) about to get married to a women thirty years his junior, challenging ageism. And even Angus himself is not your average nerdy, dejected fat kid, for he makes his worth at football (the point being that others overlook his contribution to the game) and just wants to get along and can stand up for himself. In fact, one of the more successful subversions of stereotypes has Angus frequently breaking the nose of jock bully Rick from the age of five; the unspoken gag/point is that here’s a bully we see continually getting hurt and pounded as a result of his own pranks, yet never stops bullying (but don’t worry, because he’ll get his). But there is a moment when Angus’ mum lists some of the humiliations her son has to go through at school which seems to hint at a parallel film, perhaps a less broad and less contrived exploration of his plight more in tune with the minutiae of his experience. 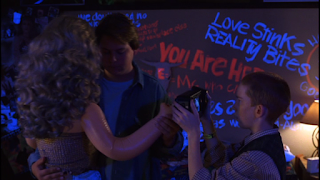 friend, small, big-eared and socially inept ~ surely a missed poster-boy for ‘Gummo’ ~ who isn’t challenging anything really, but just sticking by his big pal. It’s probably this friendship and Angus’ relationship with his Grandpa that resonate most: they are fluid, funny and relatable. Much is made of the childishness of both Angus and Grandpa Ivan: they bicker like siblings; they both have big dates with idealised women (females don’t do well here); the two run parallel with grouching Grandpa George C Scott representing lost chances. It is also only late into the film that it is obvious that Troy is far more physically abused than Angus and yet seems to be intent only in aiding and abetting Angus’s goals in life, thereby revealing Angus in a more self-pitying light. But the film only briefly touches on this foible. Again, the film misses a chance to delve deeper into character and instead goes for tired chess analogies instead. Even so, the film holds its own with the endearing performance of Charlie Talbert as Angus ~ reputedly found in a Wendy bar queue. 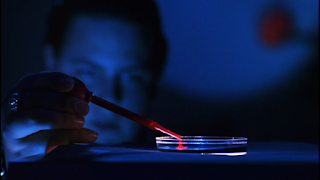 And what would a coming-of-age film without a great soundtrack of the times? Personal highlights are opening credits with a marching band playing along to Love Spit Love’s ‘Am I Wrong?’, starting things on a high, and slow-dancing to Mazzy Star’s ‘Fade into You’.