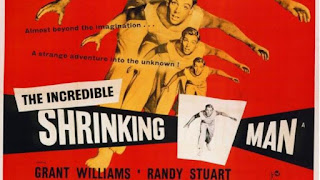 Jack’s Arnold’s classic adaptation of another of Richard Matheson’s genre-defining concepts: exposed to a cloud of radiation and insecticide, Scott Carey (Grant Williams) starts to shrink, and nothing seems capable of stopping this process. 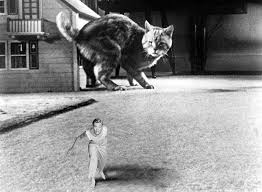 And, of course, this all directly relates to his loss of masculinity. Richard Christian Matheson (the author’s son) says that he thinks Arnold saw in the book “this idea of masculinity being a kind of falsehood, a kind of vulnerable construct, and I think he was very fascinated by that.”* We first meet Carey charmingly bullying his wife into getting him a beer and strikingly peaks in the image of Carey trying to lay down the law from a doll house balcony. Perhaps the film misses a trick in excising the daughter character for the book and therefore establishing his virility. Evidently, he comes from a period mindset where the privilege of male dominance is a given and his shrinking loss of it is more than he can bare. He goes from a man that assumes his privilege is to get his wife to get him a beer – the punishment for this casual misogyny being that he gets exposed to the radioactive cloud that will lead to him shrinking – to self-pitying and then to a diminutive figure fighting living in a matchbox and for resources and survival in the basement. Only when Carey has fulfilled the manly business of surviving and killing and anoints himself triumphant over the universe of the basement is he ready to stop mooching and embrace his fate. The novel makes even more explicit the concurrence between Carey’s increased bitterness as his size diminishes: as Ryan Lamble says: 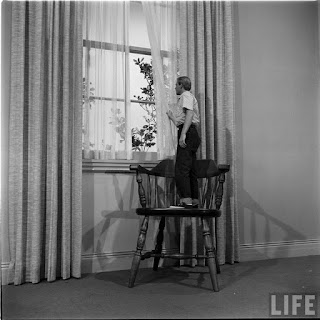 “As Carey dwindles in size, so too does sense of power and self-esteem, until he becomes an embittered, deviant character who comes to hate the people he once loved.”

It’s a vivid metaphor for toxic masculinity that never seems to date.

Wonderfully self-obsessed with its own high-concept, it remarkably takes this to its logical conclusion whilst moving through stages of kitchen sink drama, Atomic Age fear and pseudo-science, metaphysics and body-horror, primal man adventure and monster movie. We have Matheson’s fidelity to his own text to thank here (although the book doesn’t end with “With God, there is no zero”, that punchline is allowable as a concession to a happy ending), but also Jack Arnold’s strong refusal to have a trite ending with something like a serum returning Grant to his original height. 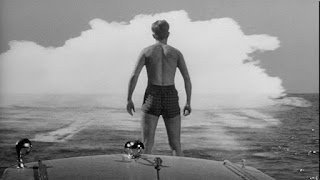 Carey's transformation is as transcendental and as complete an odyssey as Kubrick’s ‘2001: a space odyssey’, with his established masculinity as a conditional. The closing voice-over speech can be taken as ‘50s cornball pseudo-religious sentimentalism, or evidence of Carey’s delusion and instability of sanity as he shrinks way into … nothing? The infinite?

* Arrow blu-ray: 'There Is No Zero: Writing The Shrinking Man an in-depth conversation with author Richard Christian Matheson about his father and the creation of the original Shrinking Man novel'. 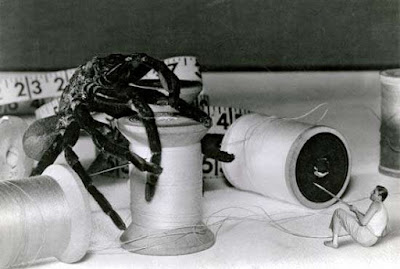