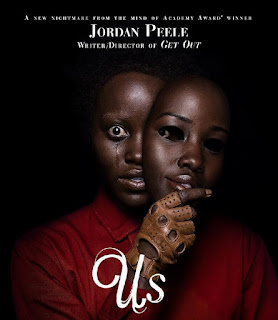 Jordan Peele’s ‘Us’ starts with the Reagan-era commercial for “Hands Aross America”  playing on a tv set with ‘C.H.U.D.’ on the VHS pile beside it, and this juxtaposition proves a big clue to the film’s agenda – ripping the trick from ‘Climax’. Oh, should I then write that as ‘U.S.’? The focus of many reviews will be on the film’s sociology and politics, and Amanda Marcotte provides a useful and direct analysis that ‘Us’ concerns the uprising of the consequences of Reaganism. Peele says ‘Us’ is not about race this time, and it’s true that its metaphors are set more on class, but of course class will always feature race. The director of ‘Get Out’ is unlikely to ever be able to escape the shadow of that debut, but it is also unlikely that he would want to. Just to say that having a black family as central protagonists in a horror film seems quietly ground-breaking enough (see Shudder’s ‘Horror Noire’ for a fine run-through of the dearth of black representation in the genre). 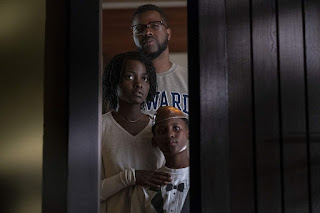 But why both ‘Get Out’ and ‘Us’ will have longevity beyond being attuned to their contemporary contexts, their eras and political climate, is that they deliver their horror wholeheartedly and with panache. ‘Get Out’ had the don’t-go-there premise, the dark secrets of a superficially benign community and the mad scientist trope. ‘Us’ has the doppelganger, the monsters underground, home invasion, the bodysnatchers and repressed coming up from the tunnels. Both films are stuffed full of all this horror stuff so while all the social commentary and poignant analogies are taking most of the attention, these tropes are providing all the fun. And they are fun films too: they are good with the natural humour. Maybe ‘Get Out’ suffers from having an obvious comic relief, but the humour in ‘Us’ is far more organic and fulfils much of the crowd-pleasing. 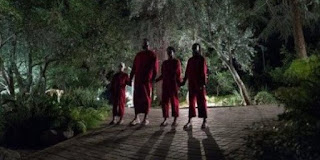 I saw a Twitter witticism by someone that he had just overdosed on ‘Us’’s metaphors and had to lay down. Surely some will accuse Peele of trying too hard, of being too full of itself, but going off the rails and reaching too far is what horror does and Peele has a fine sense of the balance between fun and symbolism. After all, it’s not as if Romero’s ‘Dawn of the Dead’ is subtle. Peele is obviously wallowing and enjoying the tropes so if you read this as cliché, it’s not going to exceed disappointment. And there are all the references and rips from other films – there’s ‘Climax’ at the start, there’s ‘Funhouse’, even the red of ‘Don’t Look Now’, if you like, or Myer’s boiler suit, and the glove that is both a reference to Freddy and Michael Jackson – and on it goes. Typical of contemporary horror, the Easter eggs for fans are plentiful.

And that Peele delivers good, solid and relatable characters that are far above the genre standard shouldn’t be undervalued. One of the notable touches is how he has characters in such outrageous scenarios talking in a more realistically casual manner that isn’t quite typical of the genre. It helps the whole cast deliver memorable performances whilst still working as archetypes (the man-child horny husband, the indifferent teen, the unfulfilled trophy wife, etc.). Lupita Nyong’o especially gives exceptional lead and support performances, proving again that the genre is giving women some of the best roles around ~ but everyone gives great twin performances.

The doppelgangers are, of course, the Ids of the characters: the brutish father, the creepy grinning daughter, the animalistic and destructive son. It is with the son, Jason (Evan Alex), that there is perhaps one of the films greatest subtleties: at a crucial moment, he seems to realise that Pluto (his double) is the worst of him, but that they come from the same stock and so intuits Pluto’s trap, that he can control his “tethered”, then apparently melding with Pluto to thwart him. And although everyone gives fantastically physical and otherworldly Id-performances, it is surely Evan Alex’s scrambling around like a monkey or a spider that remains most memorable, and so at odds with the more prosaic character of Jason. Even Umbrae’s (Shahadi Wright Joseph) smile-like-a-horror-icon and Red’s horror-croaky voice are pulled back just at the moment of being over-done. 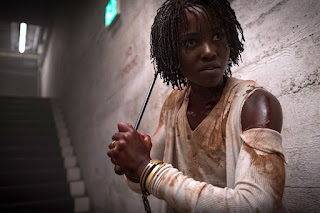 But like ‘Get Out’, ‘Us’ almost sabotages itself with an unsubtle moment where everything stands still for exposition. These moments are untypical of the fluid flow and fine judgement on display before and after, but it seems there is so much to get in that Peele hasn’t yet quite figured how to avoid these moments of obviousness. But nevertheless, much else is so strong that surely this weakness can be forgiven.

It’s not so much about the twist which any genre-savvy viewer will suspect/know – so it’s barely a twist at all, maybe – but how the film plays with that throughout and what it goes on to say: it’s about how, given the chance, she came from the underground and learnt all the signifiers and mannerisms to be the thing above ground, in a comfortable middle-class and loving family. Did we think she was just playing a part, because she really did seem to care about the kids, etc.? No, she undoubtedly really meant it. Give the underclass a chance and they’ll be indistinguishable from the privileged. Hell, they might even achieve “Hands Across America” where the privileged failed.

It's a little uneven, a little mumbled, but‘Us’ is a far more open work, far 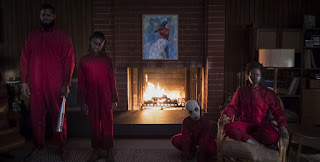 more willing to let the audience pile in with interpretation where ‘Get Out’ was more definite. It’s chock-full of social commentary and symbolism that can be parsed long afterwards. It helps that there are many striking images to hang it all on and that it’s all nicely and sharply filmed – already I note costume companies are taking the film’s get-ups as Halloween options. Peele offers another meal of genre tropes to interrogate another perennial topic of sociological horror, but does so with humour, vigour and with a sense that the genre can stab and viscerally reveal subjects in ways that others cannot.