"My Bones in the War" - sample

Here's the opening to the short story 'My Bones in the War', which  features in my new horror anthology 'Under Your Sleep and other weaknesses'. Skeletal undead soldiers always gave me the creeps, so here's my tribute to them. 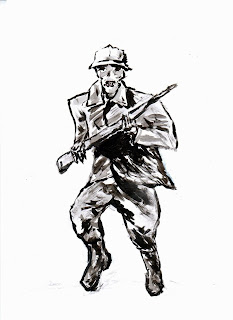 My Bones in the War

In all modesty, I was a fair hand at painting and my greatest achievement, I suggest, was the self-portrait that I managed when I was eighteen. I can see it now as the last offering I made to the people I left behind before I took off for war. I spent many nights imagining my family and friends sobbing over the painting, with its limitations and ruddy cheeks, moody stare and a host of shadows over the left of my face in what must have been, surely, an unconscious representation of both my melancholy and shyness. Why did I paint myself so dour? I have always had bouts of self-recrimination over this. Too immature to see beyond my own gloom and pretensions, I gave it such grand seriousness, undoubtedly thinking this was a mature reflection. I wish now that I had thought beyond myself and left behind a picture of light contentment, possibly even a smile or a look of amusement. I guess I assumed I would have a future in which I would be able to commit to other paintings that would capture my full scope of expression. But we do not forecast what will be best after we go to war, although we hang all upon getting home again. A generous and grateful portrait would have been kinder.
Now, of course, I have no face. Or at least very little flesh upon the bones and certainly not enough to give an expression at all, stern or otherwise. Just yesterday, we came upon a barn where a small oval mirror was fixed upon the wall and though it was smeared with grime, I glimpsed my visage and suffered again a torrent of memories from my previous life. This only reinforced my suspicion that mirrors can act like violent triggers for the consciousness and conscience and that I was right in my resolve not to carry one with me.
~

The problem with the enemy is its humanity. An enemy should be faceless, relentless, indiscriminate and merciless and unquestionably deserving of death. And we are all these things.
We do not share conversations, rations or battle plans, for we do not appear to have any to share. None ~ even as we move in upon the edge of the city, coming through the mud with only our boots squelching and squeaking to accompany our relentless onslaught, we impart nothing. Not even names. We cannot remember our names. I fear that I alone in our troop observe and reflect. If others bare consciousness, they do not let on. I myself seem unable to convey my awareness.
Just this morning, I drew a skull-and-crossbones in the dirt where we had stationed ourselves and another soldier saw what I was doing, the hollow orbs of his eye sockets motioned a look at my scratching. And he said nothing. Perhaps it reminded him of childish fantasies of pirates. I do not believe any of us have spoken for a long, long time and in fact I have come to doubt that we even can.
But then I recall, somehow, an incident when I last heard one of us make a sound with his voice.
We came upon an enemy camp in the woods, and perhaps we smelt the smoke from their fire long before we saw them. I certainly remember following the smell of ashes and tinder and then we came out of the trees and saw a small, makeshift site. These enemy soldiers were obviously on their way somewhere and had stopped to pitch camp. They probably thought they were safe. We came from the forest as shadows and bore down upon them with rifles and bayonets with hardly any inclination to stealth. They were taken by surprise and horror and their fight was more in defence than aggression.
And during the slaughter, an enemy soldier impaled one of my troop with something that appeared to be a lance. I suspect it may have been a tent pole, perhaps. He was no doubt improvising a weapon, having exhausted his ammunition. This makeshift spear tore through the uniform of my fellow soldier, through the rib cage and broke the visible ribs open and fixed him to the ground, whereupon my fellow soldier was set on fire because he fell into the campfire. The campfire revealed the flickering horror in the enemy soldier’s eyes but reflected not at all on the dead surfaces of our skulls.
And my brother soldier screamed. As the clothes of the soldier burned, revealing bare broken ribs beneath, the tiny tombstones of his teeth parted and an otherworldly cry of fury poured out through the tongueless, lipless mouth and, no doubt, from the empty ‘v’ of his nose and orbless eye holes. It was as if, at the last moment, he had become aware not only of some inherent memory of his humanity. It was the sound of gears ground to nothing but still furiously working. I cannot tell if this was a scream of victory, agony, or fury.
That was the last sound any of us made for I am sure we all have been silent since.
Afterwards, having shot that enemy quick enough so that his last expression was of the horror he had seen burning, we unpinned our colleague from the campfire. Fire did not concern us so much. His clothes had burnt off and his bones were burnt but he picked up his helmet and an enemy rifle, saw it still had some ammunition and continued to march with us.
Today I caught a glimpse of myself in a car wing-mirror as we entered a dead village and I saw that I had less flesh than ever on my face.
~
Posted by Buck Theorem at 1/21/2020