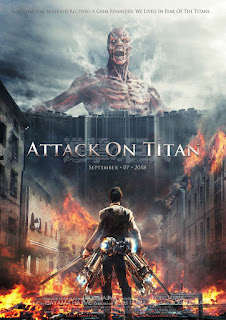 IMDB says: “Feature adaptation of Hajime Isayama's manga about a monster hunter out for revenge.”

I haven't read the manga or seen the other anime adaptations of this. 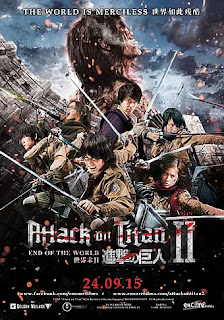 The giant Titans are agreeably grisly, happily chomping on human victims amidst a conspiracy plot about incarcerating and oppressing the survivors of the original Titan attack in a walled city, etc. In the second film, we get to the Chosen One trope that typifies such scenarios. The characters are uninteresting, there’s a nominal romantic subplot, some dodgy acting, lots of screaming one another’s names, effects extravaganza aesthetic, fight scenes descending into unintelligibility  … and whenever the Titans storm in it’s a relief from the interminable exposition and characters’ inane emoting.
Posted by Buck Theorem at 3/29/2020