Dr Who: The Visitation 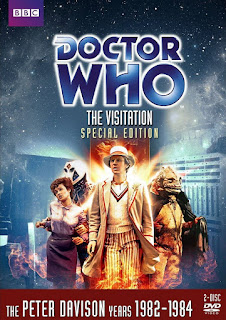 ‘Dr Who’ is comfort food for genre fans. The TARDIS is a genius narrative device for getting the protagonist anywhere, anytime so that it covers everything from the Gothic to alien planets, and that ability to go anywhere is key to the Doctor’s longevity. Oh, that and regeneration. It can just make up the rules as it goes along, more-or-less, so when things get sticky, just move the goalposts and add something new to the mythos. And always the monsters and aliens. That’s a big part of what we came for. 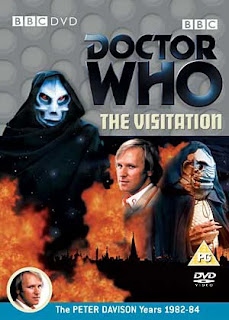 Oh, but let me make this clear that I’m mostly talking about the original series now, some way into Colin Baker.  The new era riffs too much on The-Doctor-as-Rock-Or-Pop-Star-God for my taste. I mean, I like the way The Doctor would just turn up in the middle of a world or universe threatening situation and sort out the bigger plot: it was never just about him, but rather what he did to resolve the threat. But David Tennant was good at the manic-zany stuff and I liked the way Matt Smith would just walk in a room and be both charming and sinister simultaneously. 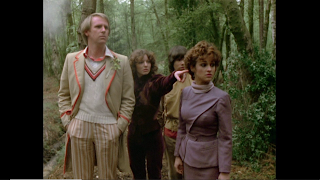 With ‘The Visitation’, we are with the Eighties “nice” Doctor, Peter Davidson. Well, I say that but he’s a dick to Adric throughout... I know that Adric (Matthew Waterhouse) is generally considered the least liked companion, but, I mean, you have Ace? And I always found Tegan (Janet Fielding) more annoying and tedious, although she really isn’t so grating in this story. The story by Eric Seward is vintage ‘Dr Who’ storyline: the TARDIS ends up somewhere unplanned (Heathrow several hundred years too early in an attempt to return Tegan) just as an alien invasion is kicking off; the TARDIS crew get involved, run to-and-fro a bit, have run-ins with the locals and the aliens and thwart the invasion. What distinguishes this one is that the alien threat, the Terileptils, are intending to use the Black Death to wipe out humanity to take over Earth themselves… somethingsomething. On the commentary, the actors talk about how in rehearsal they would question the logic, but when you see the story in action, it all makes a holistic sense. 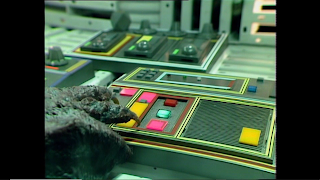 There’s a definite need to go with the flow with ‘Dr Who’: has a series ever relied on its audience’s generosity? It’s true that ‘Dr. Who’ was always a triumph of imagination over execution. There’s a kind0f free-for-all logic that carries you along and entertains away so that you are enthralled and critical in equal amounts and you are just left with a hub of enjoyment. You say: “Oh, don’t leave the TARDIS Adric, because that’s stupi - oh, he’s captured! Pfft!” Question marks on the collar? *groan* Is the android wearing… cricket gloves? But it really doesn’t matter because there’s a wholehearted enjoyment of genre tropes that make The Doctor’s adventures addictive and pleasurable and overcomes its glaring flaws. There’s the claw shot. Unconvincing explosions. Forced drama for padding, but perhaps less here than usual. The cliff-hangers aren’t so much, somewhat perfunctory. Threat of beheading? Someone will interrupt next episode so it doesn’t happen. 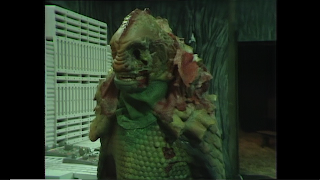 The clunky monster suits delight in their hand-made fallibilities: the Terileptil designs are bright and memorable – something like an amalgamation of armadillo and iguana? – using the animatronic lips to make them look more like they are actually talking. The fact that Michael Melia plays the Terileptil Voice as straightforward instead of over-exaggerated grounds the outrageousness and any impracticability of the costume. On the other hand, Michael Robbins gives a prime example of how to ham it up handsomely for ‘Dr Who’ as the story’s requisite Doctor ally in just the right way that is fully enjoyable without falling into laughability; although the commentary tells that he thought this was the worst thing he’d ever done. It’s a shame if he was not having as much fun as his performance is. 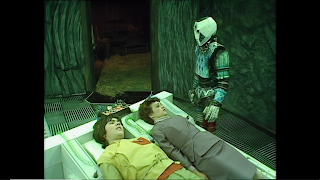 And ‘The Visitation’ doesn’t really have that one special effect that really requires a flagon of generosity from the audience to get over (like the rat in ‘The Talons of Weng-Chiang’, or the clam-like threats in ‘Genesis of the Daleks’, or K-9 going sooo slowly, etc, etc…). There are the usual deus ex machinas and just pure luck to solve things, but also some nice conceits like the spangly android dressing like Death to scare the locals. And in typical ‘Dr Who’ fashion, it sneaks in some agreeable nastiness with a defigured alien face, a briefly bubbling Terileptil corpse and witch-hunts.

But why do we see so little of the other Terileptils? 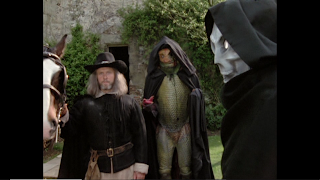 I first saw this as a teenager and the final twist that The Doctor caused the fire of London always stuck in my memory. You know when the background to a Doctor story is historically based that he is going to be involved or responsible somehow. It’s not at all an exemplary story, but it was a ratings hit and it’s solid old school ‘Dr Who’ entertainment that ticks all the right boxes, good and bad, but that’s all part of its popularity. 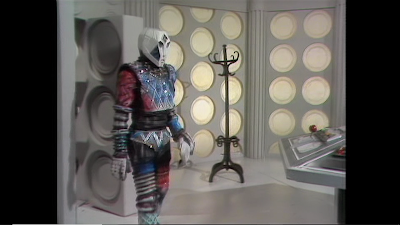 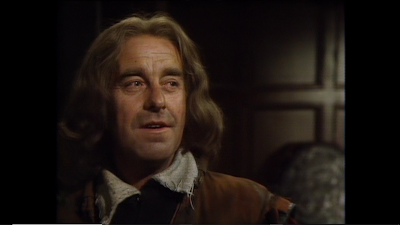 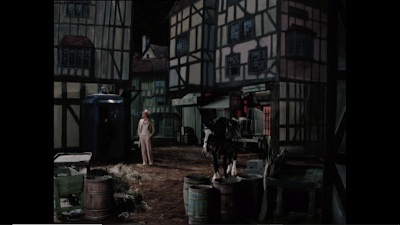 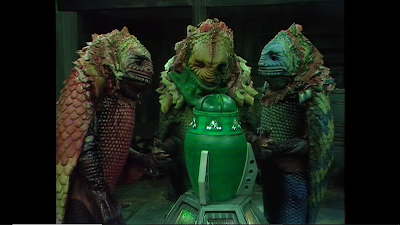