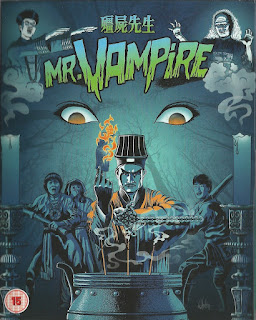 I hadn't seen 'Mr. Vampire' for decades, but I remember it being a lot of fun. And it is.

The simple ingredient that made ‘Mr Vampire’ a crossover hit in the Western world in the 1980s is surely simply its slapstick. But not just the slapstick-fighting, but also that the humour was recognisably of the ‘Carry On’ kind, plus more sophisticated farce. Foolish assistants, lovely ladies mistaken for prostitutes, mugging and gurning, trousers down, that kind of thing. On the surface, all that buffoonery, running and jumping and kicking and crashing with each other and with hopping vampires is thoroughly beguiling in the art of its performance. None of this needs words and is often somewhere between Buster Keaton and Benny Hill. Both impressive and somewhat base. The subtitles can only hint at the wordplay going on for a non-Cantonese speaker (as in the coffee episode), but even so it’s easy to parse that the joke is about not being aware of cultural mores and laughing at the expense of the innocent. 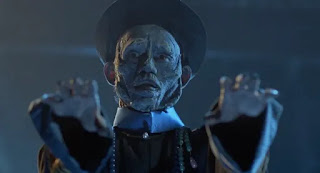 If broad comedy is a Western audiences’ way in, the jiagshi – the hopping vampires introduced by this film – are exotic and goofy enough to be instantaneously appealing. They are less a horror threat than a farcical obstacle to be overcome. It is the buffoonery of Master Gau’s (Ching-Ying Lam) assistants (Siu-Ho Chin and Ricky Hui) that are the actual cause of most of the problems. But the fact that the jiagshi are mindlessly, mechanically relentless – Wikipedia says they are also known as hopping zombies – gives them enough intimidation that as they are stiffly hopping, the characters are swinging, jumping and kung-fuing around them for both thrills and comedy. It doesn’t take an instant to get the rules that a prayer pinned to or marks on the forehead stall them. Or to hold your breath in comic fashion to avoid them. However, we also learn that sticky rice absorbs their evil. If only Father Merrin had known this in ‘The Exorcist’. There’s the Taoist context to, but as with Indonesian horror ‘Pengabdi setan’ that uses Muslim beliefs, it easy to acclimatise to a differing perspective because it’s all playing from the familiar universal horror playbook. (There are evident similarities between ‘Pengabdi setan’ and ‘Phantasm’, for example). 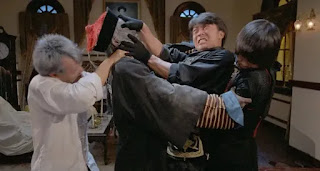 If the humour is left a little wanting sometimes, there is an agreeable free-for-all about proceedings, but the farce is well structured and never bogged down by a bid for seriousness or poignancy. The story even throws in a subplot about a seductive ghost. All the while, Master Gau is the straight man throughout the hijinks who will sort this out with Taoist magic. As James Oliver contextualises:

“The intellectual current of those times was strongly hostile to traditional beliefs and traditions, emphasises modernity and its corollary, modernisation. ‘Mr Vampire’, though, stresses the primacy of the Chinese worldview, taking the efficiency of Chinese folk practices as a given, so casually accepted that Man Choi can use Taoist magic to humiliate Wai for comic effect.”*

So this doesn’t differ from the dominant strain of horror that cautions against modernity, that warns that the past and the dead will always terrorise us and that only the old ways will beat them. But what it does have is a spritely pace, a colourful palette, just the right side of zaniness, relentless slapstick and impressive fight choreography that is bound to win you over and – for a Western audience – the novelty of  the jiagshi to spice things up. 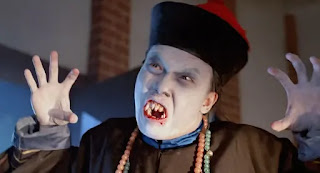