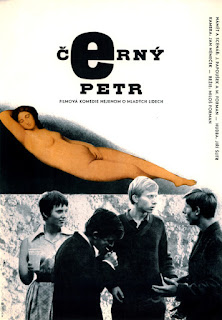 Loose-limbed New Wave slice-of-life, Czech style. It’s about nothing-and- everything: about a hapless 17year-old starting out in the world of work and romance, and none too successfully. This age of uncertainty is captured wonderfully, without judgement, and often funny. There are truthful organic details such as Peter/Petr (Ladislav Jakim) being ever-so-slightly more confident with his own age-group but just sitting and absorbing his parent’s concern and hectoring, browbeaten. Every time he is with them it seems like an interrogation: they aren’t mean, just overbearing and old-fashioned and not understanding of their son’s underdeveloped sense of confidence and ability.

There’s subtle political context in the way Peter’s first job is employed/trained in a store to spy and inform on shoplifters – with his boss’ spin of “we’re just trying to educate our customers to themselves” quickly dissipating – and how even the painting of the Madonna is watching them at home. The parents hector and lecture because, probably, they just feel it’s their job, not aware they are giving away their own discontent. They aren’t really inspiring aspiration. Aside from the political allegory, overbearing parents are something any teen could understand. But Peter isn’t intending to rebel, just trying to fit in or do what is expected. Even Peter’s acquaintance, the boorish Cenda (Vladimir Pucholt), isn’t quite the bully and rebel he initially might seem to be, but as equally awkward and embarrassing as he is pushy. Hey, he even comes to give Peter his money back. He’s the light relief. 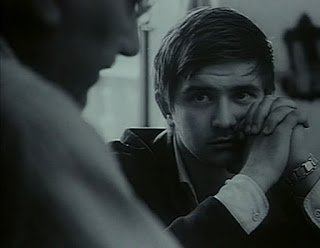 The slice-of-life sub-genre is easily dismissed as inferior to something more strident and obviously trying to say something. Not that they don’t have a point and themes, but I am defining these as films that are led more by incident than narrative; less defined and marred by tragedy than accentuating the incidental the trivial. I seem to be thinking slice-of-life as the lighter side of neo-realism’s trend towards the downbeat. It’s about tone, editing, a feel an intention. So ‘Kes’ qualifies more as neo-realism but ‘We the Animals’ is slice-of-life, with its elliptical editing and dreaminess, even though they are both tragic.  But the modest agenda of something like ‘Black Peter’, or ‘We are the Best’, or a litany of other coming-of-age dramas that don’t hold with clamorous character “journeys” holds their own considerable power as reflections of daily life; of capturing moments between all the vivid dramatics. ‘Jim Jarmusch excels at this, perhaps the slightest of his slice-of-life being ‘Paterson’ (a favourite: it tells acres about daily artists; Jarmusch is less reliable when doing genre narrative). Or you have the likes of Linklater’s ‘Before’ Trilogy, or indeed his ‘Boyhood’. An example like ‘Les Centre Cents Coups’ is an example where the New Wave condenses that slice-of-life lightness with neo-realist tragedy. 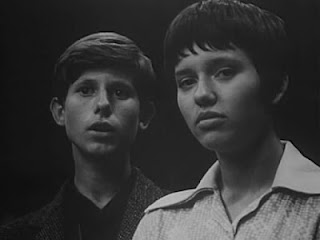 There’s a lot of flash-and-dazzle in the New Wave, but in ‘Black Peter’ Forman only allows for one obvious trick: a freeze-frame that can’t help but nod to the aforementioned ‘The 400 Blows’, but for different intent: here, it stops Peter’s father’s lecturing in his tracks, as if saying make-way-for-something-new, or is-that-all-you-have? Certainly, Peter looks up expectantly.

Forman keeps the tone low-key and unaffected, but like the work of Yasujirô Ozu, the understatement allows for themes to bubble under and captures a mundane truth of daily life that something more bombastic can’t ease in to. For example: I never was a Czech teen starting work in the Sixties, but I certainly related to the slightly rudderless stumbling into adulthood that starts with Peter’s slightly difficult road crossing. For example, the prolonged aimlessness of the scene at the dance is a highlight, a delight in its capturing adolescent navigation of awkwardness and bravado and expectation. This slice-of-life genre captures the universality of experience, its randomness, despite the specifics, however strong our proclivity to impose narratives.