"Halloween": the biopic (World of Remakes #1) 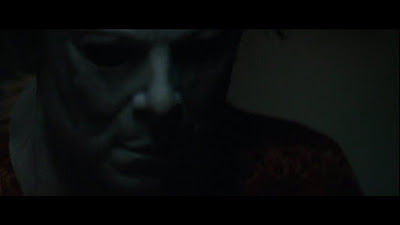 Firstly, the original "Halloween" is scary. As a kid, it terrified me every time I watched it… for years… I have no idea how many times I have seen it, and even now I am happy to leave it on as wallpaper, because the direction alone is a pure treat. There’s a killer on the loose, and that’s all you need to know. You don’t need to know why.

Come the Twenty-First century and many previously scorned low-budget horrors had be reclaimed as cinematic classics, or at least worthy. And there seemed a greater and more cynical spate of old favourites being remade. Or "re-imagined". This isn’t anything new, and Horror has always been a highly, ahem, cannibalistic and incestuous genre. That and shamelessly derivative, of course. But to be a horror fan is, unlike proper critics, to find the gold in the trashy, and not to criticise the trash for not being shiny enough. Inevitably, a remake of "Halloween" was declared, and they said Rob Zombie was going to remake it. Well Zombie had earned a lot of fandom with his earlier features - "House of a 1,000 Corpses" and "The Devil’s Rejects". They showed promise, but lacked discipline and erred on what I’ll call the "heavy metal" vision of horror. He was known for white trash sleaze. Then we heard Zombie was going to give Michael Myers a proper childhood back-story. A white-trash back-story. It didn’t sound promising. It sounded like blasphemy. A small corner reserving judgement because they believed in Zombie; the rest of us did that thing of snorting our derision at Hollywood defiling the greats.

My first reaction was fascination. I groaned at the un-sophistication of the opening set-up. Repulsive stepfather cussing everyone in sight and if he wasn’t an abuser, that‘s probably only because he didn‘t have enough screen-time to get around to it. Mother-stripper. Michael Myers sister making weak gags about his masturbating. Baby wailing in this maelstrom. On the other hand, we had young Michael starting the morning by cleaning up having murdered another pet, and during the bad white trash breakfast dialogue asking for a replacement furry victim. The shaky-cam began to reveal itself as cinematic, not just Hollywood YouTube. We had standard school bullies who, naturally, brought with them a load of smut-talk concerning Michael’s mother. And then there was the first killing… the bully gets it and it’s horrible. Truly horrible. Something chilling sets in. After the family murders, Malcolm McDowell dominates Act II, which is concerned with Michael’s institutional treatment. Act III, and Michael is a gigantic slab of heavy metal meat, on the rampage in all washed-out ugly colours. There’s a station rest room with a black guy offering a Tarantino-esque segment. There are a lot of bloody bear breasts, firmly staking this as exploitational and unprogressive, maybe even cynical. It’s too long. I was waiting for it to end shoddily, but it doesn’t: the end is straightforward, nothing fancy. And yet.

It finished and it stayed with me. I saw it again. The dialogue was still weak, and yet I found I had remembered, and still recall it mostly as a silent movie. The camerawork is impressive still, utilising a variation on the handheld prowl cam brilliantly used by Carpenter; it shakes around the scenes and glances around the killing, often falling still on framing as consummate as the original. Here, rather than stalking and prowling, it’s like a voyeur-bug, or a detached part of Myer’s psyche watching himself. The early killings are compelling and eschew fast-cutting shock-editing for a more elongated sense of dread. The resonance is of matter-of-fact brutality, rather than cheap thrills. The view shakes around the murder of the stepfather, then it pauses as the blood floods from the bottom of the frame, off screen. As the household slaughter unfolds, Michael takes a moment to look outside at the fake horrors, all those trick-or-treaters. The final rampage has none of the thrills and clutch of suspense of the original, but it does give Michael a moment of utter pleading and confusion when he falls to his knees before his non-comprehending sister; and it does have a finely executed and extended metaphor of the old Myers house being torn apart by Michael from the inside.

As trite as the expression "re-imagining" is (smacking of denial as to the actual nature of the carrion-like "remake" beast eating from the good name of the original), Zombie’s "Halloween" almost validates the term. Zombie has filtered Carpenter’s original through his own agenda, and ultimately that is as it should be. The alternative is the kind of serviceable but unremarkable horror remake in the vein of "The Texas Chainsaw Massacre". I didn’t care that "Halloween" was too long (I rarely do). I chuckled at Malcolm McDowell showing everyone else how to actually dispense a line. I was convinced by Daeg Faerch’s angel/devil delivery: one minute momma’s boy, next silently creating corpses around the house. I wallowed in the sleaze, the flipside of Carpenter’s clean suburbia (decades later and suburbia had devolved into "Gummo" and "Suburbia"). Damn if the very choices mostly dreaded - extended and coloured-in Myers origins - became that which elevated Zombie’s version and gave a parallel vision of the original. It’s more grungy than heavy-metal. With a more focused basis - using Carpenter’s original rather than Zombie’s own idea - Zombie arguably revealed more disciplined and mature aesthetic compared to, say, the "Natural Born Killers" style of throw-every-at-the-wall-hope-it-hits-on-a-statement of his earlier efforts. It was more "Martin" and "Henry" than "Friday the 13th" and "Black Christmas". There was meaning in this remake. 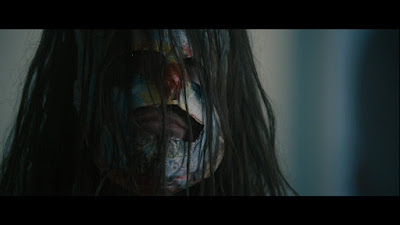 2/ The Ups and Downs of Michael Myers

In ‘Film Comment Magazine’ (March/April 2008), Nathan Lee lays out the proper way to watch Zombie’s "Halloween": not as a teen-titillating slasher, but as a biopic. Indeed, it sports all the obvious, clunky dialogue typical of biopics of even Oscar-fraternising repute such as "Walk the Line". It follows a linear childhood-to-adulthood timeline, but it also inverts the biopic genre. Whereas many biographies follow the Lazarus and martyrdom templates, Zombie offers up Myer’s life story as an unstoppable, scarcely explicable fall from barely held grace. There are two endings to "Halloween", one where Myers achieves some glint of redemption in sparing his sister, and the other in a faintly ambiguous showdown where she kills him. This latter is the version I saw theatrically, and the one I base my comments upon. The former offers some respite, some speck of humanity for Myers; the latter doesn’t, as he pursues his sister through the wreck of their childhood home only for her to pull a Final Girl turn-around. But even with the more positive ending, this isn’t a story of redemption like many biographies, but of complete psychological collapse. (For your comparison: "There Will Be Blood".)

Zombie is at pains to trace the line between internal and external psychological climates that drive Michael to his first kills - and a second viewing reveals the earliest murders as unforgettable and shocking as Carpenter’s original. Then to the failings and inability of institutions to help, indeed, they compound Myers’ psychosis. When the prison guards go on a despicable spree to abuse their inmates, it’s trashy enough, but also reminiscent of similar scenes in Lynch’s "The Elephant Man". But here, Myers is not salvaged by the kindness of civil society, but crushed in its wheels in a world where everything seems to be devolving, and the niceness of suburbia seems to barely compensate. The institutions, as represented by Malcolm McDowell’s psychologist, seem to be making stabs at humanitarianism, even towards someone like Michael Myers; but their smugness, self-congratulatory manner and inability to prevent their charge’s complete psychological collapse allow Myers the total monster to fester until he sees his chance to unleash himself. It is probably this middle section that bores those that come for the tits-and-blood that Zombie can’t help but wallow in and which, at first glance, appears to be his main conclusion to all that has gone before. But this second act shows the extent of Zombie’s ambition and dedication that he pushes the boundaries of the slasher form, by stopping the whole show to make sure we see the final environmental reasons for the evolution of this monster. Arguably, watching Michael’s psychological retreat from the world is just as distressing as his early murders. And also, Zombie is not interested in evolving Myers into a Myth. Myers is a pure meat-and-potatoes monster.

As a biopic, Zombie’s "Halloween" offers qualities that Carpenter’s peerless original did not: despair, pathos and a genuine slice of tragedy. It is not a delicate piece, but it is considered in its rendering and chilling in its detachment, a detachment that hides a surprisingly curious and humanitarian core. Why is Myers? it asks. The camera not only spies, it pries. It asks without pretensions to knowing. Although rampaging is all it ultimately concludes, this is only because "Halloween" knows we have no answers. For these reasons, it is a worthy remake, a genuine re-imagining, and, I expect over time, it will be revealed as a minor classic on its own merits. 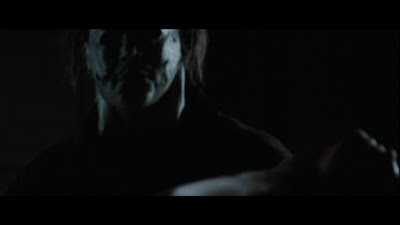