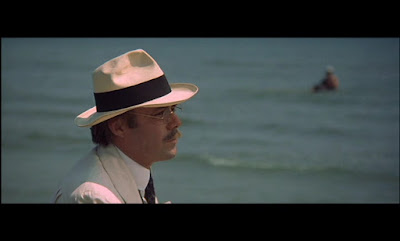 Death in Venice
Renowned masterpiece of mood and décor, nearly dialogue-free except for some flashbacks featuring hyperbolic, quite hammy arguments between a couple of artists. One of them, Dirk Bogarde, finds his career as a composer booed down and a breakdown follows, motivating a trip to Venice. The city

seems to be in the seizure of barely concealed paroxysms of death and the decay. The similar corrosion and loneliness of the composer finds relief only in the beatific youthfulness of an adolescent male also staying in the decorative hotel. Scenes roll out slow and decorated with detail, as if to lull the viewer into the very wallpaper and as if staring at a busy painting for a long time. Bogarde pours his performance into carefully, almost painfully measured affected gestures of repression and expression. Everything possesses the aroma and reek of a bona fide classic of the old school. Finally, it floats into a funereal paean to the myth of cities, to aging, to loneliness (but perhaps a relieved and content loneliness)… and then, after all that hanging around, a handsome angel of death points into the distance, having cast furtive smiles at you all the while.
Morte a venezia, 1971, Luchino Visconti
Posted by Buck Theorem at 12/10/2008