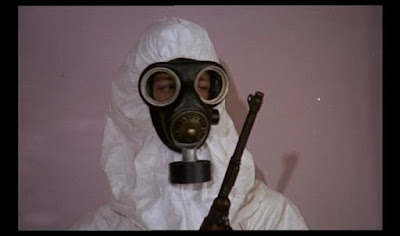 Romero’s less grisly but disturbing variation/development of the themes of "Night Of The Living Dead" perhaps owes more to disaster films of the Seventies than low budget horror. It’s ambitions are admirable, far-reaching on scale and generally successful, but here the rough edges arguably do not enhance the aesthetic (as it did with "Living Dead"). The chief weakness is the soundtrack which is often tinny and sharp to the ear, punctuated by unsubtle machine-gun military drumming and folkish songs. Romero’s intention is clear and steady when demonstrating that during times of disaster, although the initial threat may be, say, biological weapons, the ongoing peril is military incompetence, bureaucracy and people going insane. It's barely allegory. The military red tape causes more harm than good, soldiers mistreat and steal from those they are meant to protect, people that are hysterical are barely distinguishable from those infected with the plague of violence, a violence that is barely suppressed within old ladies by knitting.

There is a classic Romero opening, one which most of his films benefit from. First he introduces a horror that is make-believe, then he pulls back to make it real. The brother tells Barbara that the shambling man in the graveyard of "The Living Dead" is a zombie, and then it turns out that he really is. The father throws away the false horrors of the "Creepshow" comic, only for the boy to find that the corpse-like Creep is real. And so on. It is a methodology that always proves a winner. "The Crazies" opens with a young boy designs to scare his little sister before bedtime, only to see the shadow of his father going berserk and wrecking the house. It is another great, chilling opening that throws the viewer right in the deep end, setting out and stirring up false and real terrors. Later, as happens frequently in Romero, the view pulls back further to reveal that the truest horror is how we react to catastrophe and fear. "The Crazies" may not be considered essential Romero, but it is thick with his disillusion and black humour and shows that Romero was already creating zombie variations long before that was trendy. Rarely has a director so consistently conveyed and balanced fantastic and real horrors and their relationship to one another so successfully.