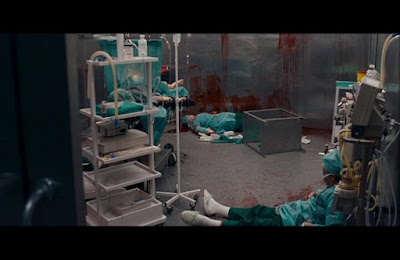 Josef Rusnak, 2008, USA
Another mediocre cover version which only goes to reveal just how sharp-toothed the original was. Larry Cohen - who created the initial "It’s Alive" films and drew out the concept and implications thoroughly and with interest across the sequels - also has a hand in writing this remake, but nothing here updates or expands the idea. This version seems neutered by all the mannerisms that have often compromised mainstream contemporary horror.
Firstly, as horror films are apparently only fleetingly interested in real adults in contemporary genre offerings, we have ludicrous casting in Bijou Phillips and James Murray as a hot young expectant couple who look as if they have only just graduated from High School Musical. If there is an enlightening horror film about young women giving birth to monsters as an analogy for post-birth psychological illness, this is not it. For his part as dad, Murray gets to do very little but maintain his designer stubble and turn up for the denouement. For all of his early interest in looking after his baby, he actually seems to do very little of it. No agonising conflicts of the roles of fatherhood for him: the difference between his part here and John Ryan from the original is like comparing a child’s doodle to a Picasso. We are left with the mother as the focus, but Bijou Phillips - who maintains her hotness no matter how messed up we are told she looks or how crazed she is becoming - cannot hold up a role that asks for so much more maturity. And acting. Her motivation and mental health are never truly explained or convincingly rendered as she tolerates her baby’s slayings and hides the mess (with barely a trace left, it has to be noted). Just because, you know, she actually really, really wants a baby, just like all girls do, and all mommies love their babies, no matter what they do, yeah? 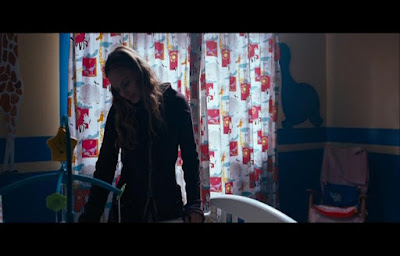 Another side effect of the youth of this central couple is that the ‘son’ role from the original "It’s Alive!" is now a younger brother. We are presented with details for him - he is wheelchair bound, a loner and melancholy, and a girl at school tries to befriend him - but these go nowhere. Similarly, the missing cat - disappearing in the film’s one great surprise moment - is barely mentioned. Corpses pile up and get disposed of with so much ease, it’s a wonder Bijou just doesn’t slap her head and put her hands on her hips and go, "Oh, not again! Will you quit this killing spree, monster baby?" The film looks slick, has a general aesthetic of moodiness, is professionally shot, but suspense is squandered and emotional involvement is nonexistent.
This is one of the films generated by the revived Amicus studios, and it does seem a misspent opportunity, full of aimless performances and subplots that go nowhere. Again, a mediocre revival feels simply like a cash-in on a cult favourite. By reducing the scope of the original to one family and one remote house (and how do they afford that big place??), the wider social commentary evaporates and all we are left with is a queasy pro-life morality tale warning that girls who have sex young and then try to abort will be punished
Posted by Buck Theorem at 1/22/2010