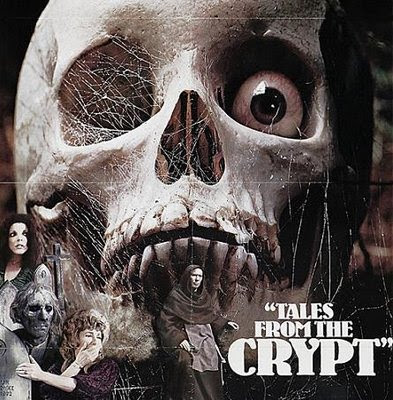 Much of the appeal of the Amicus anthologies come from their contemporary milieu: casually 1970s in detail, décor, pacing and a general era staidness that place the horrors in authentic ambience. These low budget efforts profit from a lack of embellishment and aesthetic that is almost derived from kitchen-sink television neo-realism. There is none of the lightness of touch of the ‘80s or the rush of narrative of much of post-80s horror. It’s Hammer-friendly (I won't exactly say Hammer-lite), with English stately homes and winding country roads and BBC accents, but also less stately and less aspiring. Amicus’ anthologies had fair allegiance to the trashy, the black-humoured moral retributions and quite thrills of those very comics from which this film took influence. Amicus also released their more famed anthology "Asylum" around the same time. If Hammer liked capes for its grim reapers, Amicus like bikers' leathers.

There is nothing special about any of the stories in "Tales From The Crypt", and their horrors were surely old material long before the comics they were taken from. Nevertheless, there is a general wryness and straightforward rendering that creates a palpable eeriness. Also, the film dashes through its tales so that the generic stories never outstay their welcome. Each of the tales have their moment.

"And All Through The House": The first tale in which Joan Collins murders her husband only to be terrorised by an escaped lunatic in a Santa Claus costume (!) takes place almost wordlessly over a banal selection of Christmas carols. It benefits tremendously from the drabness and warmth of the domestic setting and bland dialogue. It feels real enough and the black humour is unforced. I certainly remember the Seventies being that way.

"Reflection of Death": The second gives us a variation on Ambrose Bierce’s seminal short story "A Occurance at Owl Creek Bridge" again, with an additional unending nightmare twist also. It never quite involves itself with the grey area of the unfaithful husband not being quite the deserving cad these morality tales general offer - and Ian Hendry does much to inscribe his brief character with anguish and torn affections - but it does throw in one creepy reveal. In such brief horrors, that is all you need. The morality of these films in general is very conservative: the man is guilty of transgression of faithfulness, but from conflicted affections rather than cruelty, so the unending nightmare is surely overkill as a punishment? But these tales are all about righting the status quo and no transgressions are allowed.

"Poetic Justice": The third tale has a saddeningly aged and fragile performance by Peter Cushing (not Cushing, but the performance itself) as a doddery and persecuted old widow who just happens to dabble in black magic and one slow chill. The old man’s corpse casually walking into an ornate study, unnoticed by his persecutor and victim, is a wonderful creepy moment. Cruelty and snobbery are hand-in-hand and there will be terrible reprisals.

"Wish You Were Here": The fourth tale is cheeky enough to actually refer to its source material, W.W. Jacobs' "The Monkey’s Paw" by name, but does provide a neat scare using Death on a motorcycle, plus an unexpectedly gory hacking. It is the least of the stories. It is the desire to try and avoid one’s fate - here, it is bankruptcy and death - that is the contravention. Or perhaps it is because the couple seem privileged, moaning about their lot in a room so full of trophies of wealth and status that it looks like a bric-a-brac sale. Sometimes, these tales are just plain mean.

The last tale is the most outrageous: a heartless ex-army Major (Nigel Patrick) takes over the running of a home for elderly blind. When his neglect leads to the death of one of them, the men shuffle about like the undead and construct a somewhat bonkers revenge trap. The Major can be seen as the heartless aristocracy, buying expensive paintings from galleries for his office at the expense of food of substance for the shambling, unseeing underclass. For all his manners and diction, the Major’s true nature is represented by the vicious, trained dog … and aristocratic malice and greed will eat itself, come the razor-adorned corridors of revolution.

There is nothing particularly inspired about Freddie Francis’ direction, but he frames the important images well and, as mentioned, executes a number of excellent reveals when he needs to. It may be a little flat, but it is as swift as it is predictable, and still fun in its flickers of genuine horror and evocation of a different era and period of the genre.