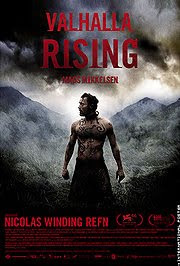 In some ways, “Valhalla Rising” feels like a debut from a director come from making experimental short films which have been successful due to a triumph of atmospherics hung upon an ambitious but thin story. Director Nicolas Winding Refn is in fact a Danish director that has a commendable list of films exploring male violence which are both naturalistic in characdterisation and given to stylistic tics: “Bleeder”, “Pusher” and its sequels, “Bronson”. “Valhalla Rising” is a superficially different beast, taking a Viking drama and conveying it through a fog of dour atmospherics and often pretty visuals; again, like a young director exceeding the limitations of budget by sheer aspiration and verve. And, like many student films, there is a certain uncertainty of performance, despite the experience of the cast, threatening to sabotage the illusion of a visit back through time. Viking dialogue - which is a chief weakness - is conveyed in low, undecided tones as opposed to what we might mostly be used to: those grand gestures and intonations of other historical epics. But, despite the visuals and the grand intentions of this journey into the heart of darkness, there is something in the space left around the dialogue that leaves it feeling weak and searching for a hold. Refn’s intention seems to be to produce a neo-realistic tone, but the performances seem un-buffered whenever dialogue is spoken. It feels adrift somewhere between Harmony Korine’s guerrilla aesthetic and Zack Snyder’s infamous “300” stylisation, with a reach for Werner Herzog and even Tarkovsky’s elemental fascination.
. 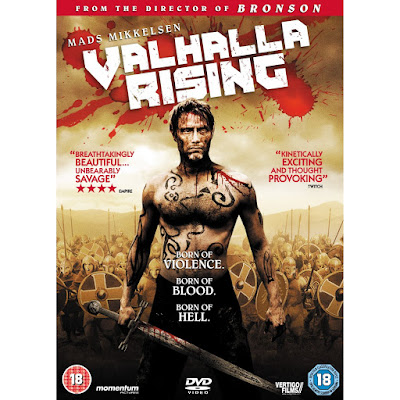 Nevertheless, there is Mads Mikkelsen, who gives a wordless but magnetic performances that keeps the film grounded. Part ravaged hunk, part super-killing machine, an enslaved warrior robbed of one eye and his humanity. One-eye is kept caged and let out only to win fights: scarred up and seemingly forever on the verge of slaughtering anyone in front of him, initially his tale promises an study of the mystery and violence of this silent killing machine. The British Momentum Pictures promotional packaging uses cues familiar from Snyder’s “300”, giving the impression of a blood-soaked war epic with Mikkelsen leading a helmeted army, and none of which represents the film at all. Although “Valhalla Rising” is arguably just as stylised, it is far from the pulp absurdities of “300”. Almost all the gore and violence is up front in the film - including an unforgettable evisceration - for when One-Eye is free and we might presume a tale of extended wrath, he acquires a friendless boy (Maarten Stevenson) as a kind of spokesman and finds himself joined up with a small gang of crusading Christians. They are setting out to create a New Jerusalem - or rather, their apparent religious leader is and the others seem along for the promised treasures the conquered Holy Land will bring them. 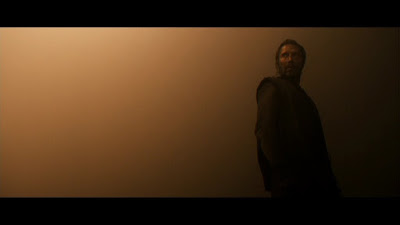 .
Then follows what may be, the gut-wrenching and bleak early passages aside, the film’s most successful sequence. The boat journey combines the elements of odyssey, otherworldiness, silence, naturalism and formal experimentation with pace, plotting and location that Refn otherwise struggles for elsewhere. Others may find this sequence interminable, for it is here that Refn goes from brooding, slow-paced doom with spasms of violence to a more dissonant sense of plot and increasingly abstract meaning. The claustrophobia of the boat is tangible, seemingly stranded in fog and undergoing a passage into another world as surely as the Bowman going through the light-show of “2001”.
.
“Valhalla Rising” is an antidote to the bombast of so many other historical warrior epics. It is not grandiose like a Ridley Scott recreation; it’s visuals and beauty rely not upon set-design but the natural world, the foggy mountains and damp rock faces, the doomy and drained landscapes, accompanied by a heavily ambient soundtrack. It is a brief tale: gaining his freedom as a slave for fighting, One-Eye goes to hell, those around him find nothing and go to pieces, and he finally meets red Devils. It is a exercise in anti-climax, a heart of darkness that goes nowhere and probably signifies very little. Had Refn lost many of its modern stylistic affectations, it may have headed in the direction of, for example, “The Valley of the Bees” in recreating a long lost era in a realistic manner. Nevertheless, for all its flaws, “Valhalla Rising” remains a fascinating experiment throughout. 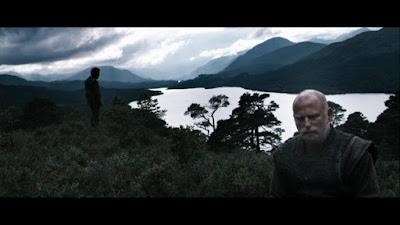