Let Me In (further notes) 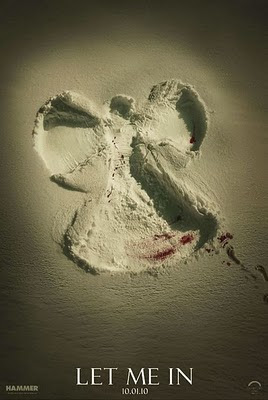 Firstly, I really like this promotional picture for "Let Me In". Probably better than the fingery one they finally went with. Simple, evocative and very much acting as if presenting a moment from the story that we never got to see (note the bare footprints).
.
Kim Newman - that funky horror critic and about as cult celeb as critics get, one side of Mark Kermode - thinks that Reeves' "Let Me In" is a better horror film than "Let The Right One In" (see his Sight and Sound review). He feels that the American version's streamlining of all the ingrediants make it more focused, which is quite the opposite conclusion that I came to. It reduces the original novel and Swedish adaptation to a far more conventional genre piece.
.
And slantmagazine's proposal that "Let Me In" is superior to "Let The Right One Is" is, well, just a remarkable misreading of what is conventional and what is not, and all but misses that Reeves borrows heavily from Alfredson's film when saying: "Reeves impresses his already jaded audience with stark images that reveal the story to be about impenetrability of the teenage mind, about finding a new language forged from exhausted images, and about combating inevitable world-weariness with fantastic violence and brutal romance." That is plainly wrong: go back to the original text and adaptation and it is there that you will find the transcendant images and "new language" if any. "Let Me In" is fun, but it ain't half as troubling, scathing and unique as the originals.
Posted by Buck Theorem at 1/06/2011

Labels: Let Me In, Let The Right One In, World of Remakes