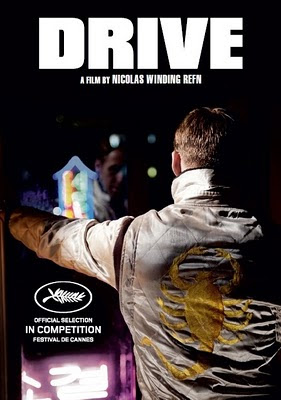 
The turning point of Refn’s appropriation of Walter Hill and Michael Mann aesthetics, “Drive”, is surely the one scene that I initially felt to be the most problematic. The elevator scene seemed to me to encapsulate Andrew Tracey’s [Reverseshot] main objection to “Drive”: namely, it’s silliness. It is indeed the same silliness I felt afflicts some of the work of Michael Mann, whose male angst and posturing I find so unintentionally amusing (less damaging in “Manhunter”, but fatally marring “Heat”, for example). This glossy emotional gesticulating feels very much like the moody soft-pop-rock that Mann so favours on his soundtracks: appealing, easy, but ultimately shallow. Refn, too, uses an electronic soundtrack, a wonderful, retro-feeling Chris Martinez score. There’s also a silly but endearing song about heroes. However, one should not be misled that Refn is coopting Mann’s taste: throughout his career, Refn has utilised excellent, distinctive soundtracks and song choices (less self-satisfied than Tarantino; less soppy than Mann).

That pinnacle moment, the elevator scene, is where the soundtrack takes over and the movements of the characters fall into slow-motion to emphasise its poignancy. The driver and his love interest have just got into an elevator with a man who the driver knows to be a hoodlum sent to kill them. Now, at first the silliness seems to be in the way that the driver stops to steal a deep, long kiss in slow-motion rather than just deal with the hoodlum whilst he has the element of surprise. It is such a moment that critics in love with gestures rather than realism or character pragmatism really take to and buy into the sign-posted poignancy. If you are to read “Drive” for its gestures, then will probably be the great romantic moment, and certainly this is how Matt Bochenski [*littlewhitelies] reads it, without ambiguity or irony. He says, “Driver kisses her before turning on the other man. It’s a moment of exquisite and contradictory emotions – love, atonement, vengeance and rage – coalescing and combusting with startling ferocity.” Similarly, James Hansen [*Out 1 Film Journal] reads the driver as heroic. But this now brings to the controversy of “Drive”.

There is the amusing tale of the woman trying to sue the film distributor for leading her to believe she was going to see another “The Fast and The Furious” film. Well, entertaining as that is, one can see a certain point: when I first saw the trailer for “Drive”, I was as disinterested as I ordinarily am with any trailer going through its tedious litany of clichés; but then I saw it was directed by Refn, and I was interested, certain that it was being misrepresented, mispackaged. Which it was. Because the car chases are probably not what you are going to remember about “Drive”. One might even wish there had been more footage of his stunt driver work, and his heist work. But no: what likely to remember is the violence, because when “Drive” lets loose, it is extremely crunchy and violent. I see this again as further evidence of how the influence of ‘extreme cinema’ of the preceding decade has trickled upwards into more mainstream titles. Many of its detractors have turned aggressively against “Drive” in response to the shocking violence.

But it seems to me that the driver is not heroic, although he is an anti-hero. He is not simply romantically detached or mostly alienated from the world around him, in the old school manner of stoic, mostly silent troubled men of action who, nevertheless, live by a code. He is - as apparently Ryan Gosling also feels - psychotic. We know this as soon as he responds relentlessly, consummately during the motel attack. He has preternatural abilities with violence when under assault. This then is why he is detached and sits at home playing with car parts, but then he gets somewhat gets involved with the girl next door and her son. He seems to be eying romance and the domestic with longing, but he knows what he is. He is, after all, a getaway driver for unpleasant people. He knows: and so when he kisses her in the elevator, even though this seems a ridiculous thing to do when under threat in close confines, he does so because he knows that when he does indeed attack the hoodlum, any chance he has with her will be gone because there shall be no disguising that truth about him (and perhaps if she does accept what he is, perhaps she isn’t his idyll after all). And indeed, the head-stomping is horrifying, and it is not abbreviated; it is excessive in a way that goes beyond self-preservation. It is psychotic. And she stands there and watches and she sees what he is and what he is capable of. And for this reason, I came to change my mind and believe that the elevator scene was the pinnacle of the film, and that it did indeed work after all. We may revel in the driver’s ability to best the bad guys with violence that matches if not supersedes theirs, in the manner that we revel in power and revenge fantasies, but it is also psychotic and surely does not meet the criteria of heroism. It is, like much of Refn’s oeuvre, another portrait of an incredibly, horrifying violent man trying to hold things together. We see evidence of this from his first feature “Pusher” right through “Bronson” and “Valhalla Rising”. And he is very good at painting these portraits, however similar thematically, through varying shades of different genres. Here, the stripped down romantically inclines thriller gives his violent man tale a pretty and soft veneer with a shattering centre. Some may see the driver as Steve McQueen cool, but that surely is not the truth of it. (And all this and the accomplished retro-feel, one can only imagine what Refn might have done, or could still do with Brett Easton Ellis' "American Psycho".) 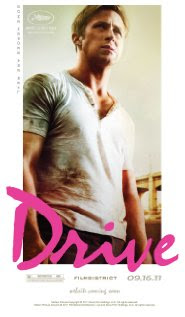 Refn sees “Drive” in terms of a fairy-tale, which implies that those metaphysical and symbolic gestures are actually treated in earnest. Refn directs both stylishly and bluntly so that the effect is disorienting, as if the sleek gloss of ’Eighties Hollywood never went out of fashion, but interrupted by the shock of recent extreme cinema. It is like Scorsese, Mann, Walter Hill, Gasper Noe, Takashi Miike are all being shaken in a cocktail glass of blood and grue. The characters are indeed mostly ciphers and that is mostly the point. Carey Mulligan, for example, is just a pretty porcelain face and little else, and perhaps her vapidity – unconvincing as she is as a single mother – is what attracts her to the driver. (And she, too, is a mostly wordess character flirting with violence, as her attraction for the driver and her just-out-of-jail husband hints; what does she see in them?). And “Drive” may well also feature “Ron Perlman, giving perhaps his first bad performance” [*A. Tracey] But its silliness is more to do with the fact that Refn’s film has everything to do with cinematic reality, gently nodding at archetypes so hard in order to make them totems and symbolic, not only clichés. It’s more in tune with the real world than Tarantino or your average Hollywood actioner, but only by a matter of degrees. It is the style, the mood, Ryan Gosling, the everso-slightly dreamy momentum and indulgences that make “Drive” transcend its pretensions and clichés. It is like a New Wave synthesiser being smashed up with a punk guitar. It’s a bloody marshmellow, a beguiling bone-based cake that allows a fan to give in to cinematic artifice and the pleasures of a typical genre piece told with just a touch of dazzle and insight. In that way, “Drive” is probably both less and more than it seems and as engrossing and dazzling piece of artifice as you are likely to see in the post-noir era.
Posted by Buck Theorem at 10/16/2011