"The Exorcist"... or "the sexorcist" conversation. 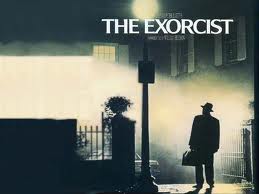 On a train home after a night out, my good friend Screaming Joe Sangre and I ended up discussing “The Exorcist”. We talked about how cool Max von Sydow is and how people sometimes missed all the Dick Smith aging make-up he wore; how the Catholic Church endorsed the film, how the foley work and atmospherics were fantastic and how it was far more horror exploitation than some would credit it.

The next morning, Joe texted me, thinking how “The Exorcist” might be: sexist  or ‘sexorcist’ in its attitude or play on fear towards female sexuality, female adolescence, etc. (the masturbating and how immoral it is, especially with what she uses [the crucifix]). I would have seen it as more of a criticism on the church’s attitude rather than all the acclaim it’s gotten from the church.
To which I answered: It is sexist because it’s earnest and buys into Catholicism, and all earnest religion is horribly sexist. “The Exorcist” is all about The Men fighting Evil over the body of an adolescent virgin. It treats puberty as a literal demonic possession: early sexual awareness and experimentation (masturbation) is represented as a total (blasphemous) abomination. See also: bodily discharges represented as disgusting pea green soup-vomit. Once the priests have martyred themselves during exorcism, the girl returns to a pure, virginal state with no memory of events (what, no vaginal damage)? What she’s being purged of is dirty language and early sexuality – i.e., female maturity and independence.
I never saw “The Exorcist” as critical of Catholicism, and certainly what I have read around it seems to imply that Freidkin (director) and Blatty (writer of original novel) both buy into it seriously. The Vatican has endorsed this film, which shows that (a) religion has a taste for horror, which is no surprise, and (b) they probably wouldn’t know how to see the film as a black comedy too. It is a fantastic horror, indeed, but I buy into its premise as much as I do “The Omen”. I do reserve the right to change my mind upon a fourth or fifth viewing of “The Exorcist” in regard to its earnestness (my memory does not store any impression of the film being critical or) and as far as relgious horrors go (I don’t buy into them), “The Exorcist” is probably the best, which is ironically the result of the very earnestness that I likely distrust.
And then I told Joe that he really has to see “Martyrs”.
Posted by Buck Theorem at 1/24/2012