Video and Violence: a vendor's tale

The following piece is taken from a work in progress, my pending book "The Gory Id: Killers in Film", and features as a foreward to a chapter discussing "Henry: portrait of a serial killer". I was lucky enough to find a journal entry written around 1992, when I worked in a video store, in which I documented a minor arugument I had had with a customer over the film and whether it was violent or not.
__ 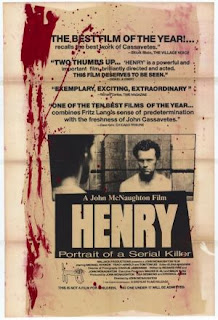 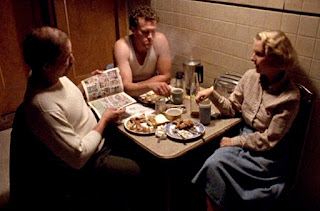 And within this climate where sensitivity to screen violence was high, this man that I was debating with, having rented and dismissed ‘Henry’, asked me if I had been to the Gallarea yet: The Gallarea being one of the brand new shiny multiplex cinemas that were suddenly popping up and sweeping the country, killing off all the local and small cinemas in their wake. I said that I hadn’t been to The Gallarea – yet – because it wasn’t really showing the films I liked, and I tended to go to The Everyman in Hampstead instead. To which the customer pushed up the tip of his nose and he said, “Snob!” Evidently we were never going to agree on representations of violence on screen.
Myself, I was becoming increasingly interested in the subject of screen violence and its relationship to society around that time. I was convinced that verisimilitude in screen violence was crucial to a moral representation: the more realistic and graphic, the more honest and truthful. I had foolishly been turned off by the hysterical super-violence of ‘Total Recall’ (1990), for example (later I would come back to it, wiser, less pious, and relish its absurdity and outrageousness), even though it was a film I should have otherwise lapped up for its outrageousness (which I did later). I, you see, was busy watching shockers such as ‘Henry’ and ‘Man Bites Dog’ and the ridiculous and stupid violence of contemporary action films did not convince me. I felt that they were trivialising a very serious subject. This, after all, was the glory days of super-violent actioners in the style of Schwarzenegger, Van Damme and ‘Rambo’ hits. Their lack of realism and awareness was an insult, I felt as I missed the greater complexities and representations of screen violence.
And so it was indeed the verisimilitude of John McNaughton’s ‘Henry’ that met my criteria of the time. And this, indeed, was to me real horror and real violence on video. And that was before the character of Henry himself video-taped his killing.