"The Hobbit". A (mostly) unexpected treat 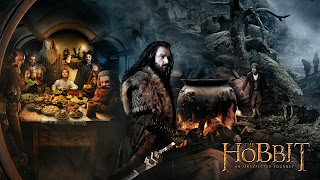 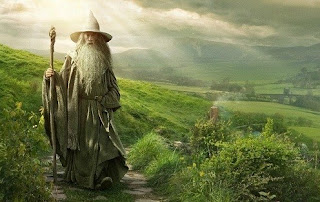 When I first heard that Peter Jackson was going to adapt JRR Tolkien’s “The Lord of the Rings”, I was fascinated and hopeful. He was known mostly for the outrageous monster splatterfest “Bad Taste”, but also the creepy and careful “Heavenly Creatures”. The guy could obviously do subtle and story as much as he could gonzo insanity so I was keeping a hopeful open mind. And so it was that I went with a friend to see the first “Lord of the Rings” instalment on New Year’s Eve and, for the next two years afterwards, we did the same. They were, for me, instant masterpieces. They were perhaps the greatest example of fantasy artwork brought to life ever put on screen; they were also some of the greatest monster movies ever made and perhaps THE argument for CGI, being also some of the greatest special-effects showcases ever made (an argument that others have mostly not matched). They were, indeed, closer to how I had visualised fantasy/fairy-tale narratives as a kid. The extra-extended editions were even better. Yes they were: a mammoth cinematic and audience undertaking. The attention to story and to detail (dirt and grime visible in the Frodo’s fingerprints when he picks up the ring, for example) made the film a long, long otherworldly pleasure; the downbeat tendencies helped to imbibe seriousness to otherwise absurdist ingredients. Despair, death and desperation coloured everything, making them grand apocalyptic visions too. I also considered them commendable war films.

I think we have been spoiled since. Every other blockbuster is a special-effect bonanza – particularly with the advent of the relatively young super-hero film genre and the fact that CGI makes EVERYTHING possible, if not actually convincing – and cinema has followed the “Lord of the Rings” precedents with “Harry Potter” and now regularly indulges in multi-film storylines and accepts that audiences are happy to wait and hold out for, and keep coming back for, the bigger multi-film narratives. This also helps to made sequels less obnoxious. Even “The Chronicles of Narnia” made it to a trilogy, even though it has, possibly unfairly, not reached the same giddy following of some others. Games systems and games are more cinematic than ever and the CGI lines between games and film effects are harder and harder to distinguish – interactive film! Every "Dr Who" episode is a special-effects wonder of sorts. What “Lord of the Rings” did is familiar turf now.

And the truth is, Jackson’s “King Kong” dissatisfied me and Del Toro’s “Hellboy 2” was just okay and he has since been curating so-so productions; so in truth I was expecting to be disappointed with “The Hobbit: an unexpected journey” too. Well, despite the crap trailer – because all contemporary trailers serve their films in the worst possible manner, I observe – it would seem that Jackson has simply picked up from where “Return of the King” left off with Del Toro backing things up and encouraging. Okay, so arguably “The Hobbit” is a little softer – because it is about discovering one’s own heroism in a far less despairing and dark environment than the apocalyptic “Lord of the Rings” Middle Earth – but it doesn’t betray it’s preceding trilogy. The whimsy stays the right side of zaniness; the monsters are horrible and often terrifying; the pacing is languid but reaps great rewards. Even as there is a slow build-up with all the dwarves assembling around the reluctant Bilbo through the plotting of wizard Gandalf, there are the most tantalising flashbacks to mitigate any boredom and to promise that the best is very much still to come. The novel “The Hobbit” is markedly thinner than the trilogy that precedes it, of course, so Jackson is raiding the appendices and legends to widen the scope and horizons and, perhaps, giving Bilbo’s adventure more maturity through association. The first flashback to the dragon assault (we don’t see the dragon Smaug, just the effects of his attack plus a flicker of tail) got this particular viewer’s pulse racing with anticipation. By the time we get to the fighting rock giants – let me just say that again, monster fans: fighting rock giants – I was sold. This, I thought, is something I could watch allll day long: and I was thinking is when a couple of characters were talking away in Elven outpost of Rivendale. I couldn’t, of course, but the feeling was that I didn’t want things to stop, and I was only halfway through the film.

Wow, I continued to think: I am really enjoying this. The fantasy vistas and the monsters and the sheer scale of the piece had thoroughly won me over. Why would I have any reservations? I gave myself over to cinematic joy. Slowly I was reminded exactly why I had fallen totally in love with the “Lord of the Rings” films. I knew others would be indifferent, but I was thrilled by “The Hobbit”.

I care not. What else is this fantastical, this lovingly made, this carefully developed, this joyous and fun?
﻿ 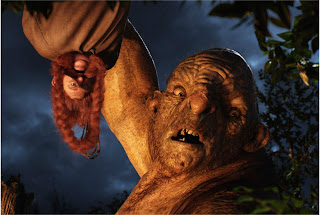 Just as Ridley Scott’s “Blade Runner” and “Alien” have proven to be definitive visualisations of science-fiction, Jackson’s Middle Earth films must be the epitome of fantasy cinema. The fantasy, otherworldly panoramas Jackson and his team create from New Zealand locations and computer-generated wizardry are continually ravishing, realistic and exceeding almost all rivals. I think the trick, the magic ingredient, goes something like this: unlike most peers, Jackson focuses continuously and unwaveringly on story and character, treating the fantastic and fabulous with seriousness; which all creates a context that elevates the fantasy visuals and the computer-generated monsters so that they have the essence of realism, so that they transcend that look at this special effect! and self-congratulatory sense given off by so many other films. That is, the effects do not feel like an end unto themselves and for all of their sense of awe, they are at the service of greater forces and rewards of narrative, story and character. One can happily give in to being awe-struck because all the elements of cinema are in action, are being attended to. (It’s prudent to mention that Jackson isn’t the only writer that this is all helped by the contributions of Fran Walsh, Del Toro and Phillipa Boyans to the screenplay.)

And then: when Gollum appeared, eyes flashing in the dark, I heard the audience mumbling with pleasure and the film positively purrs with delight. Andy Serkis’ Gollum is surely one of the greatest special effects ever put onto film. When he first appeared in the “Ring” trilogy, the shock of how good Gollum was, being a CGI creation, of how much it could withstand close-ups and scrutiny, was a revelation and he is still a total joy. Again, this is also because of Serkis’ wild performance the terrifying and the pathetic/terrifying character that Gollum is, which makes him utterly compelling. The showdown of riddles, the battle of wits between Gollum and Bilbo likely trumps any hard-man duelling present in other action films (which are, for the most part, just as unhinged from reality as Middle Earth).

Even, it seems to me, such a ridiculous creation such as the Great Goblin is salvaged by performance and being treated with seriousness. The Great Goblin and his humungous double-chin is repellent and borders on the off-puttingly silly; but Barry’s Humphries voice and straight-forward dialogue grounds him into the rest of Middle Earth.

And yes, Martin Freeman is a great Bilbo, making him amusing without being farcical.

It is a treat to have all the key cast return to maintain continuity from the previous films. Ian McKellen, Ian Holm, Elijah Wood, Hugo Weaving, etc, all return (and yes, it is still mostly an all-boy’s affair, even though the film tries to stress Cate Blanchett’s Galadriel as much as possible).

Even Sylvester McCoy is used well (and that bird-poo stained beard really is icky; one of those details that makes each character and segment memorable.)

The Orcs range between slightly softer versions and just as frightening and ugly as before.

There is the most remarkable range of facial hair.

I think that here was a film that tapped into the indiscriminate enjoyment of pure imagination and love of monsters and adventure that I bore as a boy. It seemed to me that, somehow, any critical faculties were cheerfully being bypassed or put aside for the greater good of being purely entertained. “The Hobbit” it thoroughly complimentary to the preceding “Lord of the Rings” films and proved that Middle Earth is a place that keeps on giving. I, myself, cannot wait for the next film. And I really, really cannot wait for some full on dragon action.

And how delightful that is. 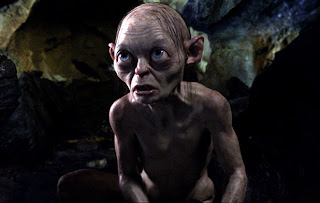 Labels: fantasy, monster movies, The Hobbit, The Lord of the Rings