"The Master" and the drift of masterpieces 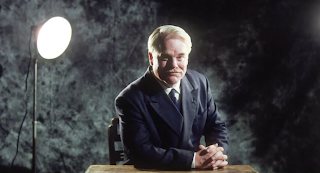 
It would appear that Paul Thomas Anderson is pushing his characters ever more into states of ambiguity, if not obliqueness. “Boogie Nights” and “Magnolia” are positively broad soap opera compared to his later work, “There Will Be Blood” and “The Master”. “The Master” seems to have divided audiences more than ever. And then it is the film of the year in “Sight and Sound” magazine. Well okay. When I sat down in the theatre, leaving in my headphones to avoid the tedium of commercials, I saw four other people seated. For some reason, two got up and left (I don’t know if they came back later on because I sat in front of them, which I prefer) and there were two at the back. For all I know, the film screened to just three paying customer (I assume everyone else was at “Skyfall”).
Happily, I had forgotten what on earth “The Master” was going to be about when I sat down to watch: I had deliberately avoided all writings and warnings about it and had forgotten the little articles of gossip about it that I had accidentally browsed. This meant that I sat for half hour or more, fascinated by the oddball character drama before me, marvelling at Joaquin Phoenix’s incredible performance… and wondering where it was all going (I was curious as hell; some others might be bored) … and then, suddenly, Phillip Seymour Hoffman’s elusive Lancaster Dodd shows his true colours and subject Phoenix’s Freddie Quell to a question/answer session that threw everything into new and exciting light. “The Master” was long predicted to be about the growth of Scientology, I suddenly recalled, and all at once the film leapt into gear.
It is indeed one of those divisive films that are said to be beloved by “critics” (who know nothing about enjoyment and are apparently an species unlike others) and met with bored horror by “the audience” (who apparently retain the facility for enjoying films rather than criticism), whatever on earth that proposed division means. Some are saying that there is no story/narrative, that it’s boring and that there is not character progress or whatever. That is not how I experienced the film at all. Compare with the more wilfully indulgent and oblique and much loved “Tree of Life”, which succeeds as stream-of-consciousness cinema, as cinema as memory and as rumination on all of the above; by comparison, “The Master” has a pretty straightforward if slender narrative.
Freddie Quell comes home from World War II suffering from Post-Traumatic Stress Disorder: war has allowed him to unleash his Id but he is unable to put it back into the bottle when returning to civilisation. We first meet him on the beach, spiking coconut juice with alcohol and making love to a giant sand-woman amongst his fellow veterans… but then he seems to take it too far and go on too long and no one seems interested in him; he goes to masturbate in the sea. It is quickly apparent that he is a loner. Moving from job to job, through wonderful period detail, failing to maintain relationships although he seems mostly to act from goodwill, he finally stumbles upon a yacht where Lancaster Dodd is holding court. Dodd, it turns out, is developing a new religion/cult based upon uncovering repressed previous lives. He is a charismatic and compelling charlatan who seems to treat Quell both as friend and primary test-subject. Quell finds some relief in falling under Dodd’s spell, finding that Dodd is genuinely interested in him, asking him about himself and seeming paying attention in a way nobody else is. With no place else to call home, Quell gives himself over to Dodd and Dodd’s “The Cause”. 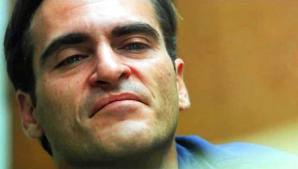 “The Master” does coast and drift, just as CalumMarsh says, but not every film needs to cut to the bone – this isn’t exploitation cinema, after all; and if you are willing to coast and drift, to wallow in the atmosphere, the set design and the potpourri of actors at the top of their game, then you may find Anderson’s meanderings gives the film the feeling of a novel’s dense prose. Here is a film more successful at allowing narrative to take a back seat than “Tree of Life”, because it allows character to lead and the story/narrative to slip back and act as support, which is pretty much the reverse of how many films work. Story is not the only thing.
The dramatic tension comes from this question: Will Quell get away from Dodd and the cult? That, for me, was the real tension at the point that he goes back to Dodd to see if he can call his cult home again. At this point, Dodd is now a big-shot presiding over his followers, but it is also apparent that his wife is pulling many strings and has never wanted Quell around. At this point, Dodd’s pitiable characteristics and his villainy are never clearer: in an awkward and oddball scene typical of Anderson as a rain of frogs, Dodd tries to literally serenade Quell back into the fold under the most uncompromising conditions: Don’t fall for it! I was encouraging Quell, despite Quell being quite the most frightening and wretched of people.
Quell doesn’t. 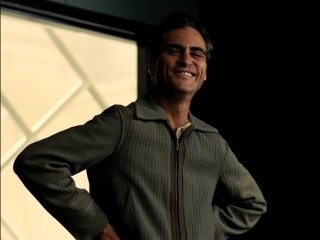 Quell beds a large woman, perhaps reminiscent of the sandcastle woman at the start of the film, and ambiguously tries Dodd’s techniques on her. This is wonderfully ambiguous. It is both playful and sinister. My reading is that Quell has somehow, miraculously, taken something positive from Dodd’s cult and is using those techniques as a method to try and connect with others; it is also snarking at those techniques too, in the manner of a boy mocking the things that his parents and teachers say.
As a tale of those that would manipulate lost and needy souls, as a tale of a lost soul trying to find a place to be, “The Master” feels quite the stuff of literary award-winners. Halfway through, I knew that this was a classic for those that go along with the aesthetic, the ambience and the pace. And, if nothing else, the performances of Joaquin Phoenix, Phillip Seymour Hoffman and Amy Adams (who gets the really rewarding slowburn as Dodd’s wife even as Phoenix is all elbows and Hoffman is all bombast) mark “The Master” as one of the most notable actor’s platforms ever constructed.
About ten minutes before the end, I heard the two people at the back of the cinema holding a discussion: I would guess that she was protesting to leave. When the credits came up, I did indeed find that I was the only one left in the cinema. Hey, it was like my own private screening, which amused me because, well, if nothing else is obvious, it is not a film for everyone.
Posted by Buck Theorem at 12/30/2012