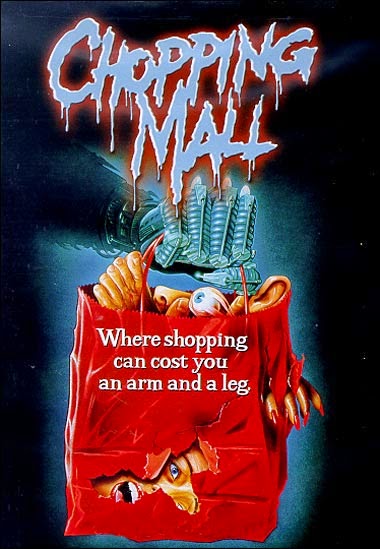 Starting decently enough with a mock-commercial for security robots, preceding “Robocop” by a year, “Killbots” otherwise known as “Chopping Mall” soon descends into ‘80s campy fun and that is all. These new security robots get a taste for killing people when their rooftop computer gets zapped by lightening (!). They also acquire the ability to: (1) be sneaky by hiding here and there; (2) pretend to be turned off when they are really getting ready to kill; (3) go up escalators even though they move on big treads; (4) find our partying teenagers wherever they run throughout the mall. The teenagers that foolishly stay in the mall after hours for some sexy time are the kinds that do nothing for the prejudice that Americans are stupid as a culture. They mostly go about getting themselves killed and reacting in ridiculous manners. It’s the kind of film where you find yourself saying things like: (1) “Wait, the robots can hide bodies? (2) “Wait, how did the robot open those doors?” (3) “Wait, they have lasers now?” And all in the same scene.

Mostly logic free and coasting on its camp qualities, “Chopping Mall” offers one impressive breast-bearing followed by an exploding head, but then all it has, from this distance, is ‘80s nostalgia value. The shopping mall makes for an interesting “house of horror” – as it did in Romero’s “Dawn of the Dead” – but the robots delightfully clash with the retro-vibe and provide a lot of humour, intentional and otherwise. The credits sequence establishing the mall itself may be the most lingering and pleasurable moment it has.