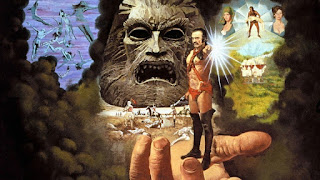 I have a life-long relationship with ‘Zardoz’. When I was a kid, I read a lot of splendid science fiction (before I read a lot of junk horror) and ‘Zardoz’ seemed, to me, to simulate what I was reading (just like ‘Westworld’, ‘Soylent Green’, ‘Planet of the Apes’, 'Phase IV' and, um, ‘Logan’s Run’, etc.). It was full of big ideas, a little tacky, a little mad: the central idea was a rogue rebel let loose in an alien world and that was a perennial narrative of the genre. Still is, as we all wanna be rogue rebels (it’s one of the principal selling points of advertising). I liked it. So then I was surprised when I next saw it: I was barely on my teens and at the Glastonbury music festival, spending all my time in the film marquee, of course. This was the early eighties and it was still called a CND festival. I saw ‘The Blues Brothers’ there; someone played the bongos throughout a screening of ‘Woodstock’; and then I saw ‘An American Werewolf in London’ during which … well, that’s a story for another time. But they also showed ‘Zardoz’, which I had seen before on TV: remember, this was hardly the VHS era and it was still a major venture to try a track down a repeat viewing of that film you liked on the three channels on TV. Anyway, I was happily watching the film when its ‘Wizard of Oz’ revelation came…. and the audience laughed. A laughter of ridicule, of “really?” I was perplexed. It was my first taste of realising that others might find ridiculous the things I took for granted. I couldn’t fathom why they found this amusing. Of course, since then, I realise that ‘Zardoz’ has a certain reputation for being silly, pretentious, laughable, a failure. Mark Kermode, for example, writes that “I think Zardoz is a terrible film – a fascinating failure perhaps, but rubbish nonetheless.”

I don’t feel this. You see, I still feel it’s a full of big ideas, a little hemmed in by its Seventies feel – which I now see as campness – bizarre and a little mad. And I approve. I still feel it resembles some of the pulp I was reading, and once I became acquainted with ‘Heavy Metal’ magazine and Marvel’s short-lived comic ‘Epic Illustrated’ I thought it resembled the stories in them too. They explored worlds that were immersive and were often hinged on the bizarre. I like absurdism if it’s working – making absurdism work is a trait I admire (another reason I am a horror fan) – and I have long since realised that I regularly have a blind spot to what others might find preposterous. It’s too pulpy to be serious and too serious to be pure pulp. In this sense, it is an oddity.

So, yeah: Sean Connery wears a nappy. Which I never had a problem with as I saw it as a loincloth and this seemed to me a simple, primitive kind of clothing which made sense in context. But it’s become a prime tagline for the film’s detractors. And the other one? When the God Zardoz says that “The gun is good. The penis is Evil.” Indeed, it seems a comedic line when isolated, but I don’t think this is unintentional. Isn’t this a political philosophy that we have seen dictating modern principles for a long, long time, boiled down its essence? It reminds me of Immortan Joe’s spouting similarly outrageous and destructive propaganda in ‘Mad Mad: Fury Road’ when he tells the masses not to become addicted to water. We hear leaders spout such frightening and illogical agenda all the time. But it’s true that the somewhat stilted dialogue at the start deteriorates into characters relating the obvious by the end. The strength of the film is not in what the characters say, even when they are speaking arch-poetry or genuine TS  Eliot and Neitzsche. The strengths are in the world-building and visuals.

And the floating head of Zardoz is an unforgettable image: a God that vomits guns and violence to followers. It’s not subtle but its effective symbolism. Just one of many vivid images Boorman offers. As Tom Milne says: “But visually the film remains a sparkling display of fireworks, brilliantly shot and directed.” And Zed (Sean Connery) stows away in this head and crosses to the Vortex, a New Agey villagey idyll whose residents are immortal and possessed of great psychic abilities. He explores and tours this world, then is encouraged to be its downfall. These eternals, of course, want death. 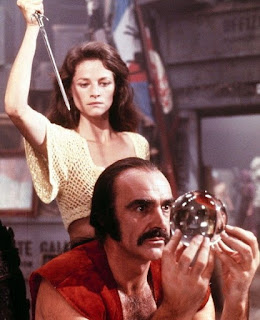 There is a subtext underlying all the feminine authority, which is dominant here, that is negative – for example, as part of his rebellious nature and seemingly sidestepping any advancement made in gender concepts, the character of Friend says he hates women. The Vortex is a world built on lies but its gated community manipulating the apparent inferiors outside goes a little beyond class war: intellectuality and elitism is seen as cold, unfeeling and as incomplete. And the implication seems to be that voting and democracy is also stifling, as ideas of civilisation that omit innate emotion. Zed’s brute-force liberates the Vortex community even as his education leads him away from naked brutality. One could argue that Zed becomes a balance of primitive and intellectual motivations by the end – and he points this out by saying he is what not what he once was – but the film does not venture into this. From the outset, Zed is a mutant capable of scheming and suppressing his baser reactions in the service of a greater plan. 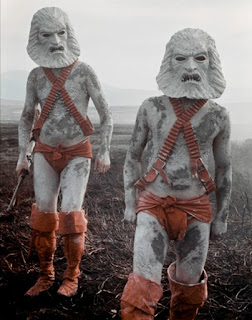 "So his plan was... herd a bunch of working class Brits into, breeding someone genetically able to think on the Eternals level; lead him to a library. Hope, that he taught himself how to read properly. Hope, that he came across the one specific book that inspired the whole Zardoz shtick. Hope, that he would stow-away on the Zardoz head and shoot him. Then hope, that the head would crash back inside the vortex. Hope, that the other Eternals didn't kill him immediately, and teach them all that they know; in the hopes that he would figure out how to destroy the tabernacle and therefore all the Eternals. In other words, the exact kind of plan you expect for a man who draws on his goatee."

Yeah, well, when you put it like that…. But the whackiness is part of it all: such a plot makes sense in context. Or rather, in context you can forego logical improbabilities. Far more problematic is surely Zed’s inclination for rape, although it is understood that he has been conditioned this way. If he is bred to match the Eternals, would this not cause him to consider the question of rape (especially if he has read all in a library that surely has its share of female and feminist authors)?

But I am more with Ben Wheatley on this: ‘Zardoz’ is all-immersive, its devotion to creating another world full-hearted and, along with the direction, helps to mitigate any shortcomings through budgetary restrictions. All the colourful period trimmings are grounded in the exposition that this is all in the service of a plan for space-travel. Even the much ridiculed costumes speak of how the Eternals are meant to have a more hands-on agenda to community (making their own). That the Vortex appears to be a picturesque lake; that there are psychic mind-games played out under colourful bed-sheets; multiple prism and mirror effects and reverse play-back all thrown into a psychedelic mix – they all speak of limits of budget and the compensation of imagination. It may be overstuffed but that is not a bad thing.

No, they don’t quite make films like this anymore: in fact it’s uniqueness means that they hardly ever did. It is authentic. And the fact that John Boorman went to this after ‘Deliverance’ is quite remarkable (although some of the existentialist concerns of ‘Zardoz’ is alluded to in ‘Deliverance’). When so much of contemporary science-fiction is just other genres with space helmets, it is when you look at something like ‘Zardoz’ that it is clear how short-sighted most genre cinema is. 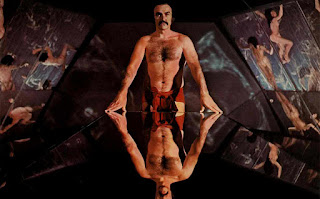 Caught it semi-accidentally on Channel Four late one night and was quite enthralled. I had quite simply never seen anything like it. It has its threadbare points, especially in the dialogue; but they're more than balanced by the sheer ambition.

Nor is it nearly as threadbare as its detractors seem to believe. Those who ridicule the plot evidently haven't seen the prologue, in which Arthur Frayn informs us that the whole thing is a satirical fable; nor have they seen any of the scenes featuring or mentioning Arthur Frayn, in which his mischievous, subversive, prankster character are clearly established; nor have they seen the ending, in which Zed is revealed not to be the only mutant and that in fact Frayn has been breeding an entirely new species of humanity. He may not have planned the specifics of what happened, but he had an idea and did what he could to better the chances of that idea coming to fruition. Which, on the macro-social scale, is sort of what you do.

I'm not sure, but I believe Frayn does actually lead Zed to the right book.

"The gun is good, the penis is evil" is explicitly connected with the overpopulation that brought down civilisation. It's a doctrine designed for a certain set of circumstances, which then outlasts the circumstances, as doctrines are prone to do: Zed and his friends rebel against Zardoz initially because he orders them to abandon the ways in which they've been brought up and start tilling the soil.

Yep, a lot of the film's detractors seem more consumed with pointing out what seems preposterous instead of seeing those things in context and giving them reason. For example, people mocking "The gun is good, the penis is evil" seem to be more amused by a naughty-ish word rather than divining why it might be said and finding its credibility. Which it does have.

The one thing it isn't, surely, is threadbare. It's teeming with concepts. Having just seen it again after a long time, I am more convinced of its uniqueness than ever. It's evident weaknesses do nothing to diminish its ability as an immersive experience. And that it's genuinely otherworldly from being filmed in essentially Boorman's back yard is impressive. That it's all the product of a space programme grounds all the craziness for me and solidly places it as science-fiction, despite all its psychedelia.