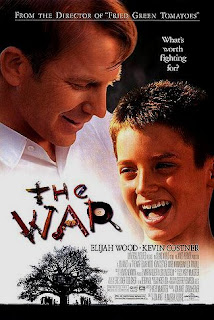 Elijah Wood gets top billing, even over Kevin Costner, as a boy who builds a tree-house. The tree-house and his long-running feud with the kids of another family are a metaphor for war, and Vietnam in particular. ‘The War’ starts promisingly, although loaded with rites-of-passage clichés, such as The Summer That Changed Everything... The all-wise nostalgic voice-over... children dancing to songs a’la 'Stand By Me'... It also bears the flashbacks, dead friends and guilt of Vietnam movies. Costner is the Vietnam veteran, back from hospital and a breakdown, full of war stories that have driven him into pacifist principles. Costner ends up too earnest; ‘To Kill a Mockingbird’ still offers the best “good dad of (Southern) peace” archetype, but unlike Atticus, this dad can still be relied upon to use violence when his son is threatened. And so many conservative mythologies are tediously re-enforced, such as the dead that become guardian angels and wishes that come true, etc. 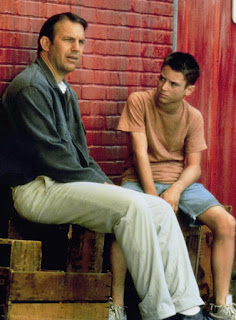 Mostly, despite some appealing moments, the film suffers from a lack of subtlety. A racist teacher is a caricature out of a Joe Dante satire and is treated to a long, unbelievably uninterrupted rebuke from the sassy black girl she picks upon. In fact, the underused black characters have the best personalities, where the adults are a bit too earnest and the kids don’t get to breath from under the contrived scenerios. The building of and the fight for the tree-house also promises more than is delivered, accompanied by an appealing seventies soundtrack left over from an ‘80s ‘Nam film. Slowly the film descends into predictability and, for the last half an hour, is almost unforgivably patronising and obvious: for example, there is no need for the sound of helicopters over the battle for the tree-house to make the point.

Although there is nothing truly disagreeable with Avnet’s film, its earnestness and self-importance work finally to undermine its strengths and to waste Costner at his most appealing and a cast of highly talented child actors (the wonderful Lucas Black – Caleb Temple from the TV series ‘American Gothic’ – has an all too brief showstopper when he beats up the bigger Wood with a devil’s shit-eating grin). almost unforgivably pat, and conservative in its resolution, the War unfortunately shoots itself in the foot, ending up neither a knowing children’s film with adult themes or an adult film with something new to say about childhood. 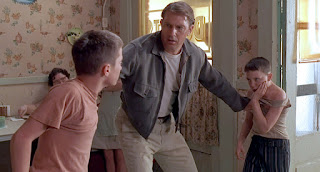