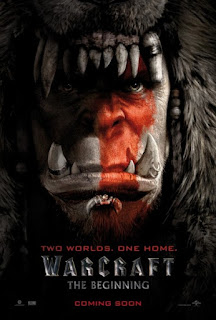 Of course, there was a lot of goodwill towards Duncan Jones after ‘Moon’ and ‘Source Code’, but I don’t think goodwill has a chance of elevating ‘Warcraft’ into some fantasy classic. There is a sense that supporters are desperately trying to make excuses.  My first doubts came instantaneously with the first shot of the orcs. You know how games have become almost like films? Here’s a film that looks like a game. There is something about the orcs, their design and execution, that means they generally remain unconvincing throughout. If this had been wholly animated, that would not have been a problem, would have been as aesthetic, but being placed in real locations against real actors does not enhance their credibility. But then again, the human actors fair no better and being placed aside orcs shows up how miscast and weak they are. Dominic Cooper as King Llane seems particularly unconvincing. It’s like the joint fantasy of a group of kids playing dress-up who just happen to look like competent actors in their imaginations. Yes, just like role-playing. 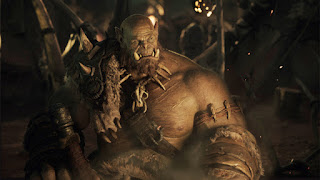 Much dialogue rumbles so fierce on the bass frequencies it’s like the orcs each come with their own Dolby speech broadcasters. Bad dialogue with motifs that are so old stock you are constantly thinking of other fantasy trailblazers that managed to inject these clichés with life (‘Lord of the Rings’, of course, ‘Game of Thrones’, I’m thinking ‘Dragonslayer’… even ‘The Hobbit’ films possessed more flair). Of course, this is all based on a game that trades in those story benchmarks – a threatened king; ‘good’ magic and ‘bad’ magic (helpfully colour-coded) and a wizard-figure that succumbs to the nefarious – and all this must be fun if you are directly interacting and navigating these narrative tropes yourself, but a film needs its own way of bringing these to life as an entity in itself. And this script isn’t it. Oh, it tries the usual tricks – humour supposedly elicited by a young wizard clearly out of his depth; the father/son theme – but nothing really comes to life. You may be thinking By the way, what is happening here? But it’s all standard stuff despite all the names and references trying to enliven it and which will fly over the heads of non-fans (I, for example, have never played ‘Warcraft’).

Where it wins is in a sturdy vision of its female characters – they may be fewer but they are every bit as useful and formidable as the males – and, even better, in giving the orcs characters nuance instead of just letting them be faceless villainous hoards. It starts with an orc couple worrying about their offspring after all, which is surely refreshing. This is why they are more interesting than the wet side dishes of human characters. It goes some way to humanising the inhuman “other”. Even so, the orcs come dangerously close to turning into ‘Shrek’. And there isn’t much to the special effects when they all appear to be CGI without much ingenuity in individual moments. It’s all *smash & angst* without really being engaging.

The vibe from the packed audience I saw it with was one of mild amusement and scoffing in equal measure. They openly laughed when the baby snarls at the end… and I wasn’t sure if we were meant to.

Jones' decline, from a very decent B-movie through a mediocre A-movie to this, has been sad to watch; even more so than that of Christopher Nolan, who at least managed to make two good films before pretension and the Batflicks overtook him.

I played the first couple of Warcrafts, in which the orcs were the bad guys and communicated in such aphorisms as urgh! and grroh hoh hoh and bad-tempered yells if you clicked on them repeatedly, and were all the better for it. For sentient orcs without sentimentality, I recommend Grunts, by the inappropriately-surnamed Mary Gentle, which also includes sex-worker hobbits, Guns and Ammo-reading dragons, the sociology of post-Final Battle race relations, and lines like "Pass me another elf, Sergeant, this one's split."

I feel as if the goodwill towards Duncan Jones - after all, both his previous films show promise and a serious genre mind - means that people are giving "Warcraft" more ponderance to a film that would otherwise be dismissed far quicker. I'm guilty of this too, but it really isn't much good.