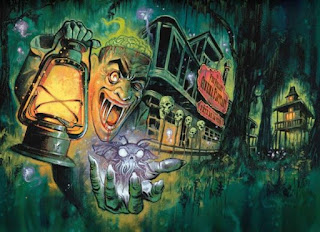 FrightFest 2016 it is then. I like it for the moment halfway through the five festival days of horror and harder edges thrillers when you realise you have lost all sense of time and self and your only worry is if you are going to reach the next film in time. There was a moment when I was in the lobby and I thought I heard a fake zombie noise. Actually, it turned out to be a baby in a pushchair, but to be fair I had just been handed a flier by a zombie a moment earlier. But it gives some idea of how your mind becomes so quickly accustomed to seeing and hearing the signifiers of the horror genre when you are knee-deep in it.

This year, rather than Leicester Square, FrightFest had moved to and taken over Shepherd’s Bush Vue and – perhaps I had missed something before, but it certainly seemed more sociable simply because it wasn’t taking place on multiple levels and so perhaps there was a greater chance of bumping into people. And there was the moment when I was chatting and someone simply came up and handed us free copies of ‘Martin Collins’ without a word. Why, thank you. And then there was the moment I saw Dominic Monaghan crossing the street towards me and it took me a moment to realise that I probably shouldn’t stop him in the middle of the road to tell him that I had enjoyed ‘Pet’. 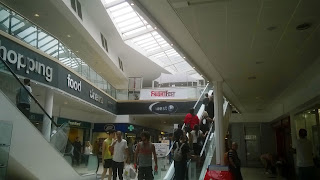 I do miss the big screen of The Empire Leicester Square where the main screen could house something like 1,300 people, all of who were tuned into the film and all justabout on the same wavelength (that screen doesn't exist now). This was particularly great when the film onscreen wasn’t so good and people started openly laughing and treating it like a comedy. The so-bad-it’s-good thing. However, there was still this reaction to ‘Blood Feast’ and ‘Sadako vs Kayako’, making them a good length more enjoyable as a shared experience.

The main menu of films is split and staggered over three screens these days and I have seen some complaints on forums that the main screen roster is somewhat tame and some of the true gems were in the alternative Discovery screens. Now, aside from ‘Willow Creek’, my experiences with the Discovery screens have not been great, so perhaps next year I will not only stick to the main screen and maybe try other things too. 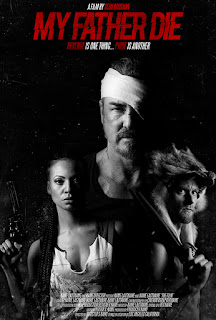 A fine slice of grimy Southern Gothic and surprisingly the only fully fledged vengeance narrative on the main screen where the FrightFest selection is usually inundated with them. When they were kids, Asher (Joe Anderson) saw his brother murdered by their father: now their father is being released and Asher is preparing for revenge. Sean Brosnan directs his debut with enough flair and artiness that it mostly succeeds on aesthetics alone, something like if Cam Archer directed straight horrors. It’s all surface deep as the relationships are thin and the father is a thorough is a thoroughly one dimensional slice of brutality (hey, he murders a cop on his first day out; his being released early for ‘good behaviour’ is the most unbelievable aspect of the whole affair). But, like a song with a single great riff, if you like it the pace has a full-ahead momentum that it will undoubtedly make a raw impression. 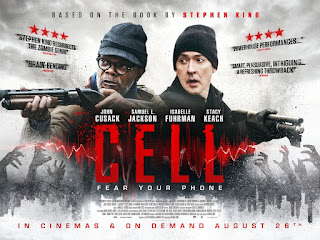 A cell phone signal turns people into murderous zombies. One of those Stephen King tales that starts out promising and then gets so bogged down its earnestness that it just becomes dreary and tiresome. It’s not as bad as ‘Desperation’ but it is too close to that to be interesting. And this despite a great opening where we see a quick zombie outbreak in an airport lounge and a memorable final image of the mindless ones circling a transmitter. But then the ragtag ensemble of survivors meet the Stacey Keach of Exposition and it’s all duller and duller from there. And then there’s the thing that mobile phones make you a mindless zombie (hey, social commentary!!) and the perpetrator is something Satanic in the guise of a hoody guy with big headphones. No, really. 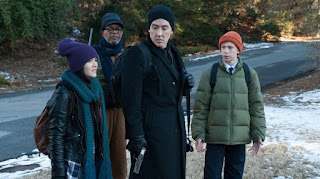 I don’t usually associate John Cusack, Samuel L Jackson and Stacey Keach with flatness, but they pretty much sleepwalk through this. On the poster it has the Kim Newman (an instantly recognisable face wandering around FrightFest) blurb saying ‘Cell’ is “Smart, persuasive, intriguing … a refreshing throwback.” No, it isn’t those things. 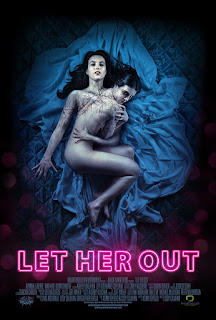 I didn’t get through all of Cody Calahan’s 'Let her Out'  (Canada, 2016) due to a bout of being ill near the end (I’m recovering from a chronic cough) so it would be unfair of me to review it all.

* That big screen doesn't exist now. I was there for it's last use to show 'Big Bad Wolves', so it least it went out with a bang.