Downstairs, in the shopping centre below the cinema, FrightFest songs play over the shopping speaker system. There’s “The Monster Mash” and “Thriller”, of course, and I’d guess that if I hung around and listened there would be Screaming Lord Sutch’s “Jack the Ripper”; but I doubt we’d get Bauhaus’ “Bela Legosi’s Dead”. Anyway, I have to be upstairs in a dark place to see films that cover troubled subject matter. 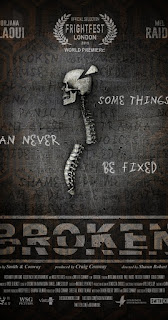 A both bleak and humane kitchen sink drama that turns to horror for its resolution. Splatter by Ken Loach, perhaps. Up until then, we are introduced to a world every bit as claustrophobic as ‘The Chamber’, with tetraplegic former rock star John – a remarkable turn from Mel Raido – and his 24 hour carer, Evie – Morjana Alaoui of ‘Martyrs’. John is bitter and difficult, trying to come to terms with his condition, while Evie seems strong but has experienced a traumatic childhood and, in this situation, comes up against her limits. The whole thing takes place in one house and the acting from everyone is exemplary, proving once again that if you lock up a bunch of good actors with a decent script you need not need to do or demand much more. But Shaun Robert Smith keeps the camerawork interesting and the somewhat dour surroundings never descend into wanton miserablism, despite the subject matter. Indeed, so engrossing and brilliantly played is the drama that it’s almost a disappointment when the film veers into more extreme territory for its denouement. But it’s about people’s breaking point and the abusive, relentless nature of work when there’s no real support and nothing else to balance it out.

Originally it was called ‘The Myth of Hopelessness’ but it was changed to a far more generic and anonymous ‘Broken’, which director Shaun Robert Smith didn’t seem pleased about (he did mention it was against his will). 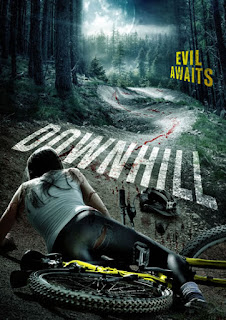 It’s awkward when the filmmakers are present and the film you have just seen isn’t much good. And there’s also not much unintentional humour to make it enjoyable as a shared experience. Mostly, people just head for the exit as soon as the Q&A starts over the closing credits.

In ‘Downhill’, cyclists head to the hills for an exhibition contest but run into a man at death’s door due a strange virus and a group of hillside killers they soon fall foul of. Although it commendably doesn’t try to explain everything, especially when it gets to its demonic sect, it is increasingly badly performed and edited so that it seems to have skipped whole scenes and looks more and more amateurish as it goes on. It gets so that it’s hard for any hack to not utilise the title for negative criticism. But I won’t. 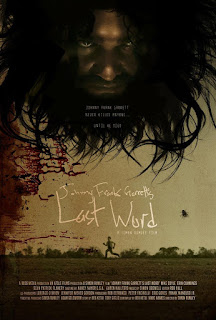 Johnny Frank Garret was executed on death row for the rape and murder of a nun although it seems this was an obvious miscarriage of justice. From this true story comes a supernatural tail of revenge from beyond the grave as the last thing Garret did was to write a curse at length (far longer than the version in the film, the director told us) for all those that had condemned him, as well as their loved ones. I always feel a little uncomfortable of true stories and suffering used for the trivia of cash-in films, but Simon Rumley talked of how the Garret family are fully behind this film, I guess seeing it as a platform to truly spoke of how he was unjustly murdered by the state so long ago.

But as to the film: it’s obvious from the way that Rumsey also told us he tried to tone down the business of the malevolent fly that he wanted to stay away from ‘The Omen’ route. Indeed, it manages to mitigate much ridiculousness by keeping the tone mostly sombre and by not giving in too much to horror melodrama, sticking closer to themes of injustice than vengeance. It avoids the unnecessary blares of jump-scares and achieves some eeriness by always keeping in view Garret’s fury at the injustice as an ongoing otherworldly force. As such, this is a decent and solid chiller whose true story basis lingers long after the genre shenanigans. 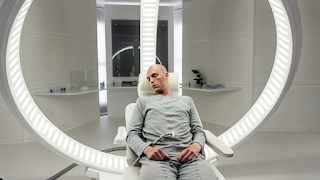 There is always one film in the FrightFest programme sidestepping the usual horror tropes for a small breather, and this year it’s ‘Realive’. It’s a futuristic tale about Marc, brought back from a terminal illness after having put himself in cold storage until a cure can be found. Well, now he’s the the first successful case of being brought back from the dead to live a second life. But his emotional ties and existential ruminations butt against the limits of his new clinical existence, for he can’t go too far. The feel is somewhere between Jan Van Dormael and ‘Gattaca’, or ‘Ex Machina’ even, with the clean and antiseptic feel on one side broken up with multiple flashbacks to Marc’s former life. It’s good, solid science fiction reflecting over mortality, the meaning of existence, love, all that jazz. Just when its dour tone threatens to be a little pleased with itself, there’s a last minute twist that throws a welcome chill over it all. 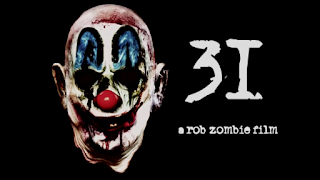 Wherein one whacky Rob Zombie gang fights another whacky Rob Zombie gang. After the unfair panning given to ‘Lords of Salem’, Zombie reaches back to his earlier homages to Seventies grindhouse to tell the tale of a travelling group of carnival workers who find themselves kidnapped for the amusement of some upper class types who pit them against highly conceptualised killers. It’s a comic book of crazed characters whose designs provide much of the visual feast. Zombie is usually better when his characters shut up, but this one is full of talk with a recurring motif being the telling of disgusting jokes. The fights are so hand-held-blurry and edited into incomprehensibility that you really won’t know what’s going on – Oh, did he just fall on a chainsaw? I think so… And at one point he introduces a strobe effect so you really won’t know what’s going on. Zombie always remains interesting but it’s Richard Brake that steals the show as Doom-head, starting it all off with a memorable monologue… although it’s true that Doom-head's reputation as a super-killer seems unearned as he stabs his prey in the back and attacks them when they have been stabbed multiple times, etc. It’s rude and crude and waywardly stylish, but it mostly misses. 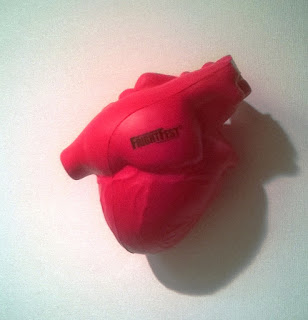 And coming out of the screenings, there’s someone handing out squishy stress-ball hearts like some Victorian street flower girl gone off the rails.