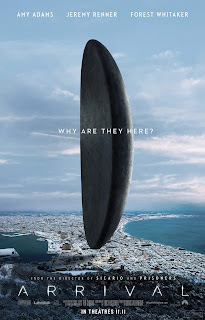 When I first saw the trailer for ‘Arrival’, I groaned at the voiceover (“one day that defines your life, blahblah”); and then there was the moment where she took off her helmet for a “proper introduction” with the aliens which smacked to me of movie-motivation than realistic procedure. So I wasn’t quite hooked and loaded with expectation, but I saw it was directed by Denise Villeneuve so I was then intrigued. And to be fair, there’s more detail in the film proper to show why she would take the chance and take off her helmet, but I’m not sure it quite overcomes its human narcissism to realise its science-fiction possibilities.

Simon Mayo and Mark Kermode say that ‘Arrival’ breaks your heart in the first five minutes. Well I can see the design that is supposed to cause that, but the melancholy tinkling music and the not-good and not-needed voice-over still automatically put me on my guard in their obvious bids to manipulate. Something more wilfully abstract would have reaped better rewards. After all, it worked for ‘Up’. So then, on guard, I start noticing little things that otherwise I’d let pass, like how Forrest Whittaker’s military chief does that tough-man act that military men all have to do in the films: for example, she says she needs twenty minutes to change when he just turns up and says get in the helicopter and he answers that she has ten. Why? Does the helicopter explode in ten minutes? No true deadline is given to justify his reaction (like: something is going to happen ohmygod! in the next hour so let's rush!). I guess military types always like to be dominant and demanding. Oh, I am sure all this is meant to add urgency, but that’s the kinda I’m gonna domineer thing that I always find denotes a bullying, assholish tendency in people. It’s going to put me off. When a film’s manipulation is obvious, this means you have to look elsewhere for nuance and that’s where a more picky viewing nature will kick in and you might start to notice such details. So that opening is something like Terence Malick with the voiceover being annoyingly obvious instead of annoying pseudo-poetic and such a evident bid for emotional resonance forewarns me that, yeah, this is really going to be about humans and not the aliens. 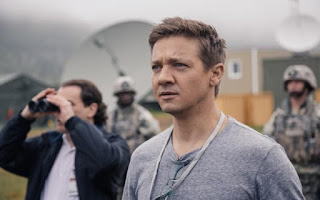 And so it is, but director Denise Villenauve is too good to let this spoil proceedings. Oh I am sure that for many such obvious emotional mechanics makes this a moving experience, but, like ‘Intersteller’, for me it’s another example of human emotion trumping the hardcore science-fiction. It doesn’t enhance: it makes it lesser. ‘Intersteller’ is a more rampant example of the self-obsessed human content scuppering the sci-fi and yet winning over audience emotions and ‘Arrival’ follows in a similar vein. On the other hand, the story concerning the daughter turns out to be not quite as expected. Mark Kermode says, 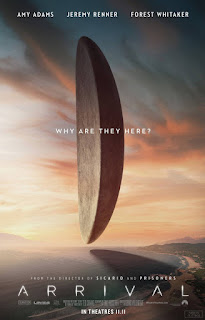 “Yet from the atemporal monologue of Ted Chiang’s Story of Your Life, in which the narrator remembers events in the future tense, screenwriter Eric Heisserer has spun an admirable script for a film as cerebrally adventurous as it is emotionally accessible.”

And this is true, but by the end, it seems as soon as they have done their part to facilitate Dr Louise Banks’ story, the aliens just leave. Hell, even the film itself says that the pairing up of the central duo is more important than the first contact. Such human narcissism reduces the sci-fi content to drama we have seen in abundance elsewhere.

But Amy Adams is great, proving again that she is exemplary at making you believe she is receiving information when we know there’s nothing there: in ‘Nocturnal Animals’ it was reading; here it’s looking at CGI. And no, the aliens are not disappointing and the image of their vessels hanging in the air is likely to stick in the memory. The other characters are not quite allowed to become the stereotypes they initially threaten to be: for example, Jeremy Renner’s physicist doesn’t become a contrary science-bore and Whitiker’s army dude never becomes an obnoxious military boor - the seasoned actors are to thank for this. Bradford Young’s washed-out cinematography provides a sense of neo-realism and Villeneuve’s pace, as in ‘Sicario’, has a sense of constant motion that keeps things constantly urgent despite the emotional baggage threatening to bog things down. The linguistics angle is fascinating and we’re a long way from ‘Independence day’, which is why reliance on human tragedy as the aim of the piece instead of it being part of the fabric feels such a limitation. But emotional sci-fi is quite popular. Other examples: I know it’s supposed to be translated as a paean to wonder, but ‘Close Encounters of the Third Kind’ is the story of a man so obsessed with the idea of first contact that he leaves his family. ‘Intersteller’ loops the cosmic to a single bedroom. ‘Solaris’ also seems to reduce alien contact to human tragedy, but it’s also ambiguous enough to be a comment on human narcissism. It’s not that science-fiction can’t be emotional – far from it – but the idea that human heartbreak dominates the universe is mostly reductive. So although its ultimate message wants to be uplifting, the reason why things turn out positively is all to do with specific human grief (to do with her saying something to resolve things, something to do with dying words): people only act on personal emotion rather  than principal and altruism it seems (and if this is a criticism of militaristic thinking, the film doesn't seem to bend that way). It doesn't quite imply that humans act out of innate goodness and selflessness so just how positive the message is is somewhat questionable.

So if you’re looking to science-fiction to confirm that It’s not all about you, ‘Arrival’ is not the place to look. It therefore results in something lesser than it might have been, as enjoyable as it is.