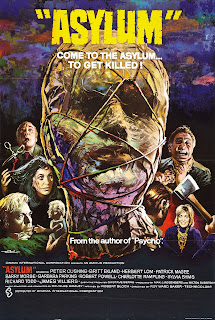 ASYLUM
aka. House of Crazies

Amicus anthology with above-average atmosphere but scuppered by Robert Bloch’s schoolboy sense of insanity. Robert Powell is the new doctor challenged with guessing which patient is the asylum chief. This paves way for three other stories. ‘Frozen Fear’ is creepy and grimly ridiculous, centring on a chopped-up body coming back to life, providing the film with one of its best images: a head wrapped in brown paper, the paper sucking in and out with its breathing. ‘The Weird Taylor’ promises much, but despite a well-measured performance from Peter Cushing, succumbs to the half-baked resolutions almost all the stories deliver. 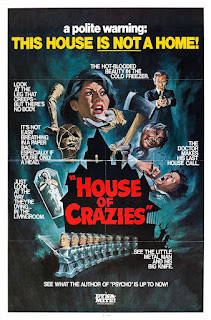 ‘Lucy Comes to Stay’ runs through some of Bloch’s motifs from ‘Psycho’ – schizophrenia equalling psychopathology; a staircase murder – but to little effect. ‘Mannikins of Horror’, the bracketing story, succeeds by being more eccentric than previous stories (and the twist may be that it is the most fantastic, despite being set in the ‘real’ world and not the recitals of the patients). Herbert Lom makes unforgettable killer dolls in his cell, convinced he can invest them with his consciousness. 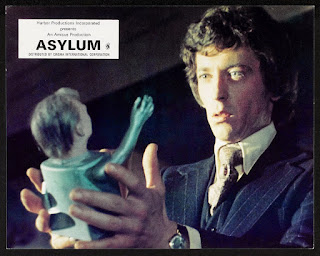 Black humour and some decent performances make this diverting, as well as an incredibly dark and claustrophobic atmosphere, but the acting is also stodgy in places and too many moments end with reductive maniacal laughing despite it's gleeful embracing of the absurd. But there's plenty to enjoy because of that absurdity and because it captures horror of another era. 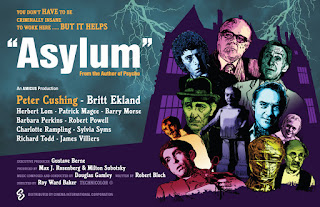 Kim Newman describes the cumulative effect of the Amicus anthologies as "about fifty mini-movies in which something supernaturally horrid happens to an embarrassed guest star." My favourite has always been From Beyond the Grave, which has Cushing as the proprietor of a tempting antique shop with some amusing novelty surprises. Perhaps because I first saw it at a rather young age, it made quite an impression: David Warner earning a place in a haunted mirror, Ian Bannen getting his come-uppance via a wedding cake, and Margaret Leighton hamming it up beautifully as a medium who exorcises the elemental on Ian Carmichael's shoulder, only for it to end up somewhere even less convenient. The source material was by R Chetwynd-Hayes, who shared Bloch's flippancy of style but had far less talent to redeem it.

Oh, I have a soft spot for this stuff, even though I'm not really a Bloch fan. 'From Beyond the Grave' is perhaps my favourite too: the ghost beyond the blue door scared me a lot when I was a kid. There is a '70s British atmosphere and execution that is impossible to recreate: I should guess that nostalgia plays its part but these anthologies made an impression on me. I even have a soft spot for 'The Monster Club' (1981) which is kind of a deadknell for this period of horror, veering as it does into awful 1980s trends (the over-arching tale is terrible).

The "embarrassed guest star" part is actually a little unfair, I think; at least to the best of them. Cushing of course was always the trouper's trouper, and From Beyond the Grave has quite an impressive assembly of British character actors who all play their roles creditably. It's obvious that Ralph Richardson in Tales from the Crypt is just along for the pay-cheque, but at least two of the stories (a variant on "The Monkey's Paw" and a poetic-justice tale set in a home for blind men) are pretty memorable.

Yes, I agree that Newman's summary of Amicus is a little unfair, but it does make for an amusing line. Peter Cushing alone is so damned good at playing all this straight and with investment; there is never the sense he is condescending to the material.