The Edge of Seventeen

I started off well at the box office by asking for a ticket for 'The Edge of Tomorrow'. But, luckily, the lady knew what I really wanted to see and she knew I wasn’t asking to see the Tom Cruise sci-fi temporal-twanger years too late.

‘The Edge of Seventeen’ is a winning indie coming-of-age drama about (and you may have heard this one before) a savvy, sarcastic outsider girl trying to figure out, you know, growing up in the vacuity of her peers that she can’t quite mesh with. Yes, so the premise is well-worn but what this does have are three highly engaging performances from Hailee Steinfeld as our funny and acerbic protagonist Nadine, Hayden Szeto as Erwin as the goofy and awkward guy who’s genuinely interested in her, and Woody Harrelson who comes to steal the show and win hearts as the teacher who’s sarcasm is more than a match for Nadine. Not that anyone else is lacking but these three performances are pretty much all you need. Harrelson is dour without being misanthropic; Szeto is thoroughly disarming; Steinfield is great as Nadine at her most witty and smart as well as when she is being selfish and obnoxious. The story goes through teenage crushes, embarrassments, fumbling dialogue, risqué and funny dialogue, angst, self-absorption and all that you might expect. 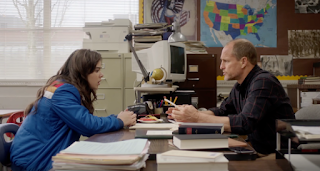 She’s trying to find herself an identity against the mainstream she feels no affinity for.  By having no outright villains, no bullies – no one is truly bad here – the film allows Nadine to be her own greatest antagonist which means she only has herself to fight. She feels real in that way rather than some ‘Breakfast Club’ teen-type. But it’s the breezy pace and Kelly Fremon Craig’s sympathetic script that pervades, particularly showing how Nadine’s brattishness comes from hurt feelings she can’t quite organise, despite her precociousness. Perhaps the ending is too neat, but why begrudge that when the intention is so generous? 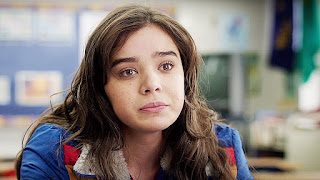