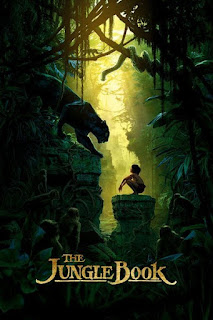 Of course the trouble with remakes is that they are always going to be compared to an original. In the case of John Favreau’s ‘The Jungle Book’ despite there being many versions this will be compared to Disney’s first animated adaptation, this being the second. The tightrope apparently needed to be walked for audiences is to tick all the right boxes from the predecessor, to just trace it over enough but also to offer something new. So of course good writing helps, but remakes can be mostly validated by using contemporary tricks that weren’t available at the time of the original. I am thinking here of Franck’s remake of ‘Maniac’ but this Disney remake of the well-loved ‘The Jungle Book’ fits that mould too. Not as if analogue animation, as it were, was ever lacking, but here we are.  (I should mention that I have not seen the original since I was a kid so came to this without any real demands.) 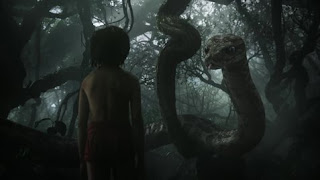 If you were dazzled by Richard Parker in ‘Life of Pi’ – and I was – then there is plenty here to amaze. This is a time where talking animals are everywhere – apes; racoons; everything else - but the CGI variety on display here goes some way to making the human dream of anthropomorphising animals complete. Only Neel Sethi as Mowgli is live-action but everything else onscreen is artificial but this CGI moves with such convincing heft and nuance that it’ll be hard for anyone not be dragged in and persuaded. In this context, it should be noted how winning Sethi is, since he was mostly acting to puppet heads and blue screen; if he couldn’t hold the attention it would all collapse. Yes, he has some of the attitude we know from other American kid’s flicks, but he is just the right side of bratty.

It’s immaculately conceived and frequently very beautiful but what is remarkable is how dark this version is, and not just that it’s often quite sheathed in shadows. The animals are realistic as can be which means – without any cartoonishness to mitigate – there is a constant tension of dread and threat that is barely relieved (it’s rated PG). When Sheer Khan kills, it is striking in its suddenness and cruelty; when King Louie pursues Mowgli by swinging across his city and then, gigantic as he is, crashing through its pillars, it reminds of the gargantuan threat of the dragon Smaug in ‘The Hobbit’. There’s quite a lot of reading ‘The Jungle Book’ as ‘The Revenant’ for kids, and that’s a good way of conveying the relentless peril in this version. We have a brutal rendering of Sheer Khan (Idris Elba), of course, but there is also the hypnotic seduction by the snake Kaa (Scarlett Johansson); even Baloo is all about conning Mowgli at first: of course he’s benign but he follows the trend of manipulation that both Kaa and King Louie (Christopher Walken) use. Oh, I’m sure Baloo is never meant to be seen as a dilemma, but duping Mowgli is initially his thing. King Louie is a mixture of the selfish conjob Baloo tries and the physical threat of Sheer Khan and as voiced by Walken, he’s all gangster. Shere Khan who is nearby trying to seduce and manipulate young wolf cubs. In this jungle, there is always a threat for youngsters, both physical and psychological. And in this way, the atmosphere is persistently dark in tone. Only the wolves and the panther Bagheera (Ben Kingsley) – as the surrogate family of the man-cub – are straight with Mowgli. 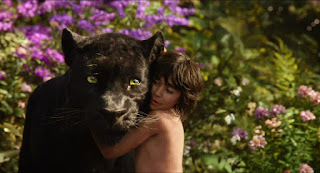 So maybe the funny stuff doesn’t really land so much but that doesn’t capsize things. Then the film, although it’s not a musical, lurches into song to lighten things up; and when Mowgli is floating on top of Baloo dueting ‘The Bear Necessities’, it’s quite exuberant to see such an iconic animated moment come to life. If you are expecting a musical, you would have to refer to the original animated feature, and what favoured songs it can’t squeeze in initially it saves for the extensive end credits.  (Scarlett Johansson does a great version of Kaa's 'Trust in Me'.)

In the end, Mowgli stays with the wildlife and although this may be seen as a cynical way to make sure there’s a ‘The Jungle Book 2’, it can also be seen as his choosing multiculturalism whilst keeping his man-“tricks” and as a rejection of man as a destroyer of nature. Although Kipling has a reputation of a Little Englander, it always seemed to me a little more complex, that Mowgli and ‘Kim’ sided with mixing up cultures, favouring democracy and rejecting a single, dominant civilization. It’s in the animal meetings and truces around the drinking hole, for example (this is even more in evidence in the short stories). When the animals all band together to take down Shere Khan, it’s a rejection of fear and fascism. So, yes, it does end on a Disney positive note, but the bullying of society and nature have been well established by then. It’s quite meaty stuff. 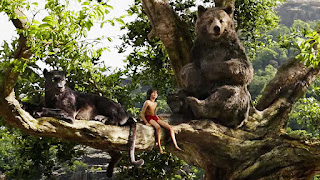 I don't think anyone would call Kipling a Little Englander, i.e. an isolationist; he does have a reputation as an imperialist, which is something quite different, and as a racist. He does seem to have believed in a moral hierarchy of races, with the English at the top; but in my limited experience his attitude to non-whites appears rather cordial for the times.

Yes, thanks for clarifying, Philip. I often get such terms mixed up. If only there was some way to look these things up.

...but I always had an issue with calling Kipling a racist when "Kim" and, through using fable, "The Jungle Book" seemed to offer clearly multi-cultural agendas. But I am no Kipling expert so this is just based on those texts. And if I recall correctly, even the most vivid tale in "Stalky and co" was the one most critical of militarism, so that too contributed to my wariness at simply writing him off - or at least his work - as imperialist.

Oh, I certainly don't mean to write him off. It's always difficult with political terms, but I meant only that he believed Britain should retain the Empire, rather than letting it go. He certainly wasn't a gung-ho militarist or a racist in the sense his critics probably mean it (Just So Stories, the only work of his I know at all well, includes among its resourceful human protagonists an Irishman, a Parsi and an Ethiopian).

"Multi-cultural" is an interesting term to apply to him; I think it has to be qualified by the fact that the English are always considered superior. Kim doesn't condemn or patronise the Indian peoples for being Indians, but its hero is, after all, white and British, and is eventually persuaded to use his time among the natives in the service of their masters. I may be wrong at this distance, but I think even in the Jungle Books there's a bit about the English as the supreme and benign moral arbiters. I definitely think he believed some cultures are more multi than others.

Oh, I didn't read that as you writing him off.

Yes, I'm aware that "multi-cultural" isn't really apt since it's a pretty recent concept; I guess I was using this as shorthand whilst aware the term wasn't really appropriate. I think your summary of Kipling's opinions sounds correct and what I suspected. It was just that I have a hard time reconciling critics labelling him racist with examples such Kim being a white privileged boy but preferring his identity to be mistaken for an Indian street urchin, or Mowgli preferring the multi-faceted realm of the animal kingdom to man. Even so, I would be hesitant to suggest that this also extends to a dismissal of colonialism, just that these characters certainly complicate matters. Mowgli and Kim are also privileged too, being in positions to pick-and-choose and move between identities and cultures at will. I also read all the meetings of the animals in "the Jungle Book" as pro-democratic. So, yes, I find Kipling quite complex. But to say again: I think you are probably right on his standpoint.