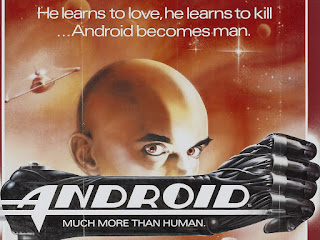 A hugely enjoyable excursion into 80s B-movie sci-fi from the Roger Corman stable: an android lives obliviously with his master on a space-station until three escaped convicts appear and change everything. With the winning directness of a short story and as a product of the 1980s, ‘Android’ is of course going to look dated – look at those computer games Max plays! – but the effects are mostly decent and, more importantly, the set design is no-nonsense and convincing in its limitations; they avoid looking too futuristic and trying too hard (it’s a case of budget restrictions being an asset) and with the company colours and strips all over it resembles living inside a canister bearing a logo. 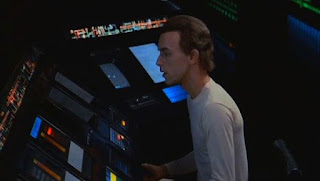 Android Max 404 (Don Opper) is a blank slate, a technological medium only as good as his programmers, his innocence and mildness a means of making him compliant, but nevertheless this is unable to stop his natural curiosity for pop culture. There are undertones of film noir not only in Max’s aspirations but also at times in the lighting. This leads him to want to go to Earth and in the three new arrivals, he sees his chance. In fact, Max 404’s malleability is his major asset. It’s another plot with robots that cannot help but anthropomorphise – the who/what is human? is a staple intrigue of the android narratives – but it’s more a part of the pulp conceit rather than investigative as in something like Alex Garland's ‘Ex Machina’. This is a coming-of-age story for androids.

Don Opper, who wrote the script, is riveting and naturally charming as Max 404. Opper is a likeable and knowing presence that should have been one of the era’s genre cult heroes but didn’t really develop this promise. Klaus Kinski is admirably level as Dr Daniel in a role that could have easily introduced over-acting; having said that, perhaps that’s just how Kinski is – in constant deluded-and-mad-scientist mode and he’s just dialling in the performance. He’s busy trying to kick-start his supreme female android – which, it turns out, can be triggered by a dose of android sexual energy. But indeed, all the cast manage to step back a few steps from complete hamminess even if it is clunky at times. The convicts are the type immediately recognisable from the Eighties with only Crofton Hardester being straightforward villainous without nuance, and it’s fun that as the audience you can see they don’t realise what they’ve stepped into. 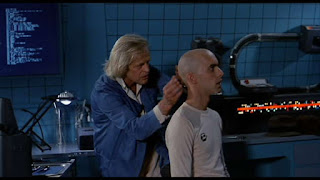 As with ‘Ex Machina’, the queasiness of the gender politics are somewhat mitigated by the overall exploitation aesthetic and moreso by the obvious intelligence and wit of the script.