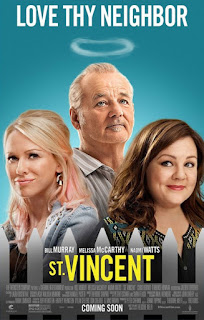 Antisocial old guy babysits a bullied but bright kid for selfish reasons and, after hijinx, is redeemed by this friendship.

Ah, you know this one. A comedy based upon the premise that it is inherently funny to have an antagonistic older guy teach an innocent kid about name-calling, booze, gambling, prostitutes, etc. So the bar isn’t set very high but the main actors are a likeable bunch so it takes some time to realise that there aren’t enough gags to elevate the shenanigans before they give way to an uninteresting sentimental denouement where the full saccharine potential of the title is reached. Of course, although many characters call him such, we don’t really believe Vincent is an irredeemable asshole because he’s played by Bill Murray (or Bill “Fucking” Murray to give him his full chive.com name). His assholishness is put down to a broken heart and it is all resolved with social recognition, a hug and a makeshift family unit. But he’s also been rude, selfish, thieving, irresponsible, manipulative, etc. As Bill Murray the celebrity is a symbol for a kind of counter-culture japester devil-may-care machismo, Vinnie’s general unacceptable behaviour gets quite a pass, but this isn’t so much sticking-to-the-man as it’s taking advantage of and insulting working people.

Elsewhere, Jaeden Lieberher as the kid Oliver has an appearance and manner that manages to mitigate his obvious precociousness into something more vulnerable and appealing, but like ‘Midnight Special’ there is the sense that this doesn’t use the most of him. 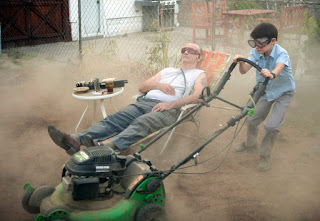 Naomi Watts has fun hamming it up as a Russian tart-with-a-heart and Melissa McCarthy grounds things immensely as if she’s stumbled in from a more earnest film – but of course this is Murray’s show and it’s a shame that it’s in the service of such slush. Beneath its bright superficiality, director Theodore Melfi’s script is only moderately funny with the kid mostly gets the best material (even with the amusing deleted scene where he and his pal discuss the origins of acting-up; his introduction to his new class struck me as perhaps the film’s funniest scene): Murray insulting and manipulating everyone isn’t instantaneously hilarious in itself, surely (?). You’re left with the feeling that there’s an emotional reconciliation because *shrug* that’s just what this stuff does. It’s all so by-rote (this is the bit where Vinnie tries to sabotage their friendship; here is where the kid overcomes the bully; here is a stroke overcome by a montage, etc) that it’s hard to be genuinely moved as the film seems to desire.